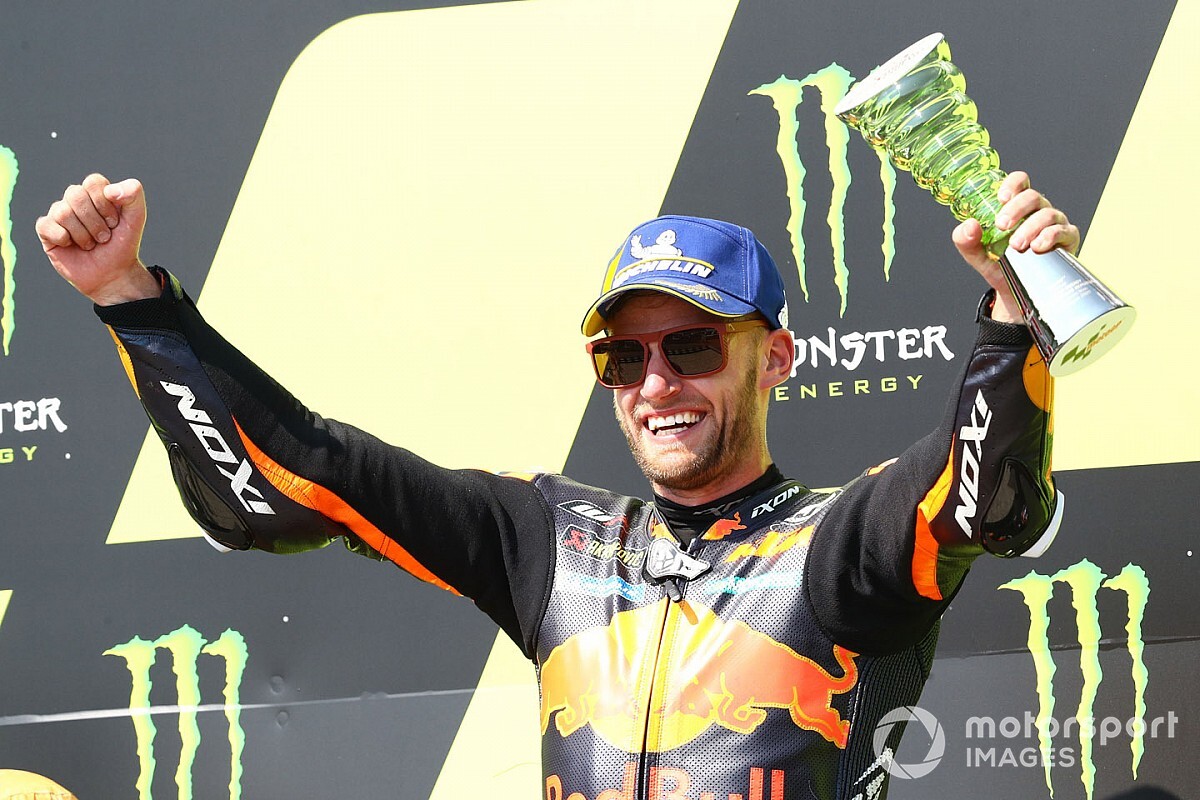 Brad Binder dominated the Czech Grand Prix to claim a shock maiden win for him and KTM in MotoGP, while points leaders Fabio Quartararo, Maverick Vinales and Andrea Dovizioso struggled.

2016 Moto3 champion Binder was promoted to the factory KTM team from Tech3 for 2020 after Johann Zarco’s exit from the squad and eased to the chequered flag in only his third premier class race for an historic victory.

Poleman Johann Zarco botched his launch off the line at the start and dropped to sixth, while Franco Morbidelli put his Petronas Yamaha into the lead having been tipped by many pre-race as the favourite for victory.

Teammate Fabio Quartararo followed him in second, but Aprilia’s Aleix Espargaro took the position away from him at Turn 4.

Quartararo regained the position when Espargaro went wide at Turn 1 on lap two, but Morbidelli was already a second clear and pulling further away.

Behind, the KTM duo of Pol Espargaro and Binder swapped fourth place, with Binder getting ahead of the other Espargaro brother for third on lap three.

Binder then piled the pressure on Quartararo for second, taking the position away from the Frenchman at Turn 3 on lap nine as the Petronas rider began to encounter grip issues.

Pol Espargaro followed him through at Turn 11 on the same lap, though ran wide at the penultimate turn and let Quartararo back through.

This allowed Zarco to get a run into Turn 1, with the Avintia rider scything up the inside as Espargaro ran slightly wide.

Contact was made as Espargaro came back towards the apex and crashed out, with Zarco given a long lap penalty on lap 14.

Binder ahead began to reel in Morbidelli hand over fist, and took the lead on lap 13, immediately pulling out a gap.

The South African continued to open up a lead, with it standing at 5.2 seconds when he took the chequered flag to become the first rookie since Marc Marquez back in 2013 to win a race.

Morbidelli began to drop pace in the latter stages, but held on to claim a maiden MotoGP podium in second.

Zarco held third after expertly taking the long lap penalty, keeping the fading Quartararo at bay, but came under massive attack from the charging Suzuki of Alex Rins as the Ducati rider battled rear grip issues.

Rins couldn’t find a way through, with Zarco pinching his first podium since Malaysia 2018 and the first for Avintia.

Rins’ fourth came as he continues to recover from a fractured arm suffered at Jerez last month, with Valentino Rossi rising to fifth from 10th as the top factory Yamaha runner.

In a woeful day for the factory Ducati team, Andrea Dovizioso was 15s from the win in 11th ahead of Danilo Petrucci, while Maverick Vinales plummeted to a mystifying 14th on the sister factory Yamaha.

Alex Marquez took the last point on the works Honda.