The pace in today’s Valencia Grand Prix was record-breaking with Dani Pedrosa setting a new Circuit Record Lap of 1'31.628. 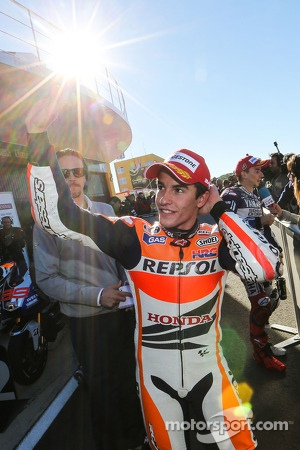 Lorenzo, Repsol Honda’s Dani Pedrosa and Marquez were engaged in an enthralling dogfight in the opening laps, before Lorenzo broke away in the second half of the race to win comfortably by 3.934 seconds. Pedrosa took second place, while Marquez rounded out the podium in third, the result ensuring he becomes only the second rider to win the premier-class world championship at the first attempt. First CRT rider across the finish line at Valencia was Power Electronics Aspar’s Aleix Espargaro who took eleventh place.

Today’s weather conditions were similar to the previous two days of the race weekend, with fine, dry weather and a peak track temperature of 30°C recorded at the start of the race. Faced with the same track conditions, tyre choice was similar to that seen in practice. For the rear tyre, there was a clear preference for the hard compound rear slicks amongst the works riders and a preference for the softer rear for the CRT riders.

The pace in today’s Valencia Grand Prix was record-breaking with Pedrosa setting a new Circuit Record Lap of 1'31.628 and the overall race time beating the old record by thirty-three seconds.

Hiroshi Yamada – Manager, Bridgestone Motorsport Department: “Congratulations to Marc Marquez and Repsol Honda on winning the MotoGP World Championship. Marc’s amazing performances in his rookie year make him a deserving world champion, but it was also an excellent effort by Yamaha and Jorge Lorenzo who did everything they could to defend their world title, including winning at Valencia today.

It was great to see a huge crowd at Valencia this weekend cheering on their local heroes and today was a fitting end to one of the most exciting seasons in recent years. I would like to extend my thanks to the teams and riders, Dorna, the FIM and IRTA for their cooperation and support throughout the year. Bridgestone is now looking forward to taking the first step towards next season through our support of the Valencia post-season test which starts tomorrow.”

Shinji Aoki – Manager, Bridgestone Motorsport Tyre Development Department: “The consistent weather over the three days meant the tyre combinations used on Friday and Saturday afternoon were well suited to today’s race conditions. Our new specification asymmetric hard rear slick was chosen by most of the works riders, while the CRT riders preferred their softer rear option. As expected, the harder front slick was by far the most popular choice for the riders. I’m very happy with the performance of our tyres this weekend, and it was great to see both the circuit record lap and overall race time records being smashed. It was a great weekend for Bridgestone and a great ending to the MotoGP season.”

Marc Marquez, Repsol Honda – 2013 MotoGP™ World Champion: “It’s a dream come true to be World Champion. I can’t explain how I feel to win the championship in front of all the Spanish fans, while fighting with Jorge and Dani who are both fantastic riders. Thanks to Honda, all my team, my family and friends, for always being there for me.”

Jorge Lorenzo, Yamaha Factory Racing – Race Winner: “Coming into this weekend my strategy was to try go fast from the start of the race, but this morning we had a meeting and decided to change the strategy and slow down the race in the opening laps. However, the other riders outside the top three couldn’t keep with the lead group, but with Dani and Marc so close it was a bit risky. We tried our best for the championship, we did all we could but today Marc is the deserving World Champion.”

Victorious Lorenzo uses all his skill to win at Valencia