Repsol Honda’s Dani Pedrosa capped off his most successful MotoGP™ season by winning an exciting flag-to-flag race at Valencia. 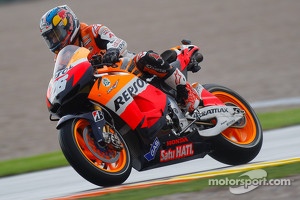 Pedrosa started the race in pit lane after making a late decision to swap to slick tyres and his decision paid off as he went on to cross the finish line 37.661 second ahead of his nearest competitor, Yamaha Factory Racing’s Katsuyuki Nakasuga who scored his first ever MotoGP podium. In third place was Repsol Honda’s Casey Stoner in his last ever MotoGP™ race. San Carlo Honda Gresini’s Michele Pirro scored the best CRT result of the season by finishing in fifth place, the Italian rider being one of those to start the race on slick tyres.

Many damp patches greeted riders on the sighting lap but throughout the track a large dry line was apparent, so tyre choice for the race was not decided until the very last moment. Seven riders selected slick tyres on the grid, while a further four riders changed bikes during the warm-up lap for a total of eleven starters on slick tyres. The softer slick options, the soft compound front and medium compound rear slick, were the only dry tyres used during the race. Among the eleven riders that started the race on wet tyres, seven selected the harder front option, while six selected the harder rear option. All the riders that started on wet tyres pitted and changed to bikes with slick tyres within the first five laps of the race.

“What an amazing finish to the season we had today! Congratulations to Dani for scoring his seventh win of the season, but I am also very pleased for Nakasuga-san on his first MotoGP podium and that Casey was able to stand on the podium in his final race. Also, well done to Aleix for ending the season as the top CRT rider in the first year of this new class. With the conclusion of another exciting season Bridgestone now looks to the future and the post-season test next week will form the basis of our MotoGP tyre development programme over the winter break.”

“It was expected that we would have wet weather today but the condition of the track for the start of the MotoGP race was just dry enough for some riders to consider slicks, although almost every rider originally planned to run on wet tyres. Of those riders that did start the race on wet tyres, the majority went for the alternative hard option wet tyre as this specification provides better durability on drying tarmac. Ultimately though, every rider switched to the softer option slick tyres during the race despite the track being quite damp off the racing line which unfortunately caught a few riders out. Overall it was a very challenging race, but our tyre allocation provided options that were well suited to the variable conditions.”

“On the grid I was expecting to do a few laps on the wet tyres before changing bikes, but while waiting for the start the track became dry enough for slicks. On the warm-up lap I wasn’t sure if I had time to change my bike, but I was able to enter pit lane and change quickly. The start was the most critical point and from then I just focused on having a good race. It was hard to keep concentration once I had my large advantage but in the end it came out alright and I am very happy to take this win for my fans and my team.”