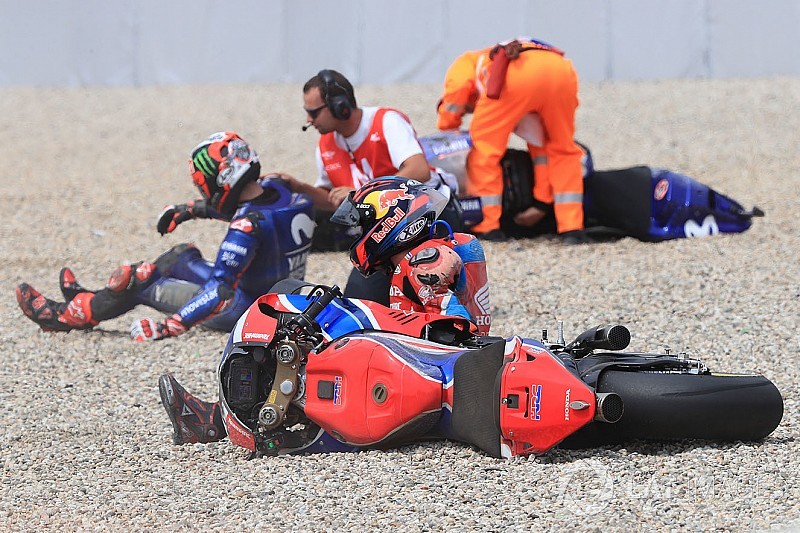 Honda MotoGP wildcard Stefan Bradl has been blamed for causing the three-bike collision on the opening lap of the Czech Grand Prix, which Jack Miller described as a "nasty little crash".

Bradl collided with Maverick Vinales and Bradley Smith at Turn 3, resulting in the retirement of all three riders.

It was the second opening-lap multi-bike crash in as many races, as Pol Espargaro took out Alex Rins and Andrea Iannone at the Sachsenring.

Jack Miller, who was also a victim of the Sachsenring crash, was close to being involved this time around as well.

"It was right in front of me, I had to slow down because of it," said the Pramac rider. "Bradl just tried to pass us all in one go, locked the front and it was dominoes from there.

"He hit Smithers [Smith], Smithers went down, then their two bikes cleaned up Maverick and Maverick had a highside.

"It was a nasty little crash, I had to almost stop, just to wait for the bikes to slide past my front tyre.

"I honestly thought ‘here we go, deja vu all over again’, fortunate enough to not get too tangled up in it this week."

Marc VDS Honda's Franco Morbidelli was another rider who observed the accident from behind.

He said the crash was caused by Bradl entering Turn 3 too fast, and the Italian feels "scared" of riders pushing too much in the early stages of races.

"I think Stefan went into corner three with a lot of speed and maybe he brake a bit too late and he lost the front I think and just made strike," said Morbidelli. "I was a bit scared.

"The only thing that scares me a little bit is that in the group in the beginning, when you are so far behind, many riders still want to catch position in the early stages and it can happen that some riders have the same idea of braking deeper or doing something.

"You have more people in front of you and more things to care about, so it is a bit more dangerous in the early stages of the race. The only thing I'd like to do just to start a bit more ahead to be away from this wild bunch."

However, Bradl - making his second MotoGP start in as many races after deputising for Morbidelli at the Sachsenring - insisted he was hit from behind, which led to the crash.

"I was braking for Turn 3, I was a bit close to Vinales, suddenly I felt some crash from behind or something," he recalled.

"Actually I realised when I stopped in the gravel, I saw also Bradley was involved. I didn’t know what was going on.

"I tried to see also race direction to get some more information, but in the end there is no footage and nobody can really see a lot. This is a bit of a question mark for me."

Dovizioso tried to break up Brno pack with "strange" pace