KTM MotoGP rider Brad Binder insists he isn’t worried about the Austrian manufacturer's development stalling in 2021 owing to the defection of Pol Espargaro to Honda.

Although not yet confirmed, Espargaro is leaving KTM to join Marc Marquez at Honda next season, with Miguel Oliveira being promoted from Tech 3 to join Binder in the works team.

Binder is one of two KTM rookies for 2020 along with Tech 3's Iker Lecuona, whose teammate next year will be outgoing factory Ducati rider Danilo Petrucci.

KTM's RC16 has gained a reputation for being a difficult bike to adapt to for riders coming from other manufacturers, with Johann Zarco and Hafizh Syharin both struggling on the bike last year having made the transition from satellite Yamaha machinery.

When asked by Motorsport.com if he was worried about the lack of experience in the KTM ranks for the 2021 season in light of Espargaro's forthcoming departure, Binder replied: “Absolutely not, I’m really not stressed at all.

"You have obviously Miguel and I who are new, which obviously we don’t have too much experience. But a guy coming in like Danilo is great in my opinion, because he’s been on the factory Ducati the last couple of years. 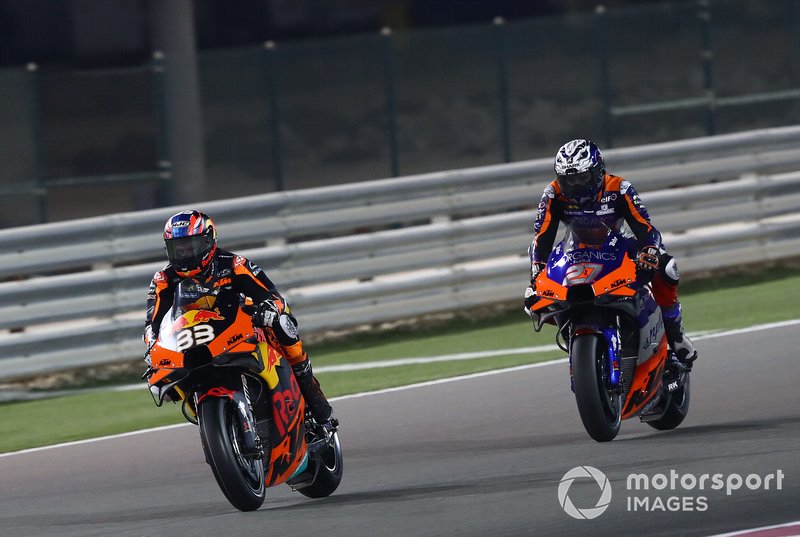 "The guy’s been on the podium a good few times and he is a race winner. So, I think his input is going to be amazing. At the same time we’ve got Dani Pedrosa, who everything he brings pretty much seems to work better and be an improvement for all of us.

“I think KTM is working in a great direction and the future is going to be bright.”

Binder will be reunited with former Moto3 and Moto2 teammate Oliveira next year, and the South African believes the pair pushing each other on will only be “good for the project”.

“We have been teammates since 2015 for the first time, and I’ve found that we always worked well together,” Binder said. “The first years I’ve always been a step behind him, but I’ve always got to the same level as him and we’ve always fought quite a lot.

“I think it’s great because we really push each other on a lot and I think it can be good for the project as well.

“We’ve been KTM boys from the beginning and now we’re in MotoGP. So, it’s really cool to see and we’re part of the KTM family and that’s where we plan on staying, I imagine."