MotoGP pre-season testing resumes with many improvements in lap times

Alvaro Bautista walked away from the first of three days of the second MotoGP pre-season test at the Sepang International Circuit with the GO&FUN Honda Gresini rider topping the timing sheets ahead of open class NGM Mobile Forward Racing rider Aleix Espargaro and his brother Pol placed third for the Monster Yamaha Tech 3 squad.

With testing finishing up around 6pm local time the riders had busy first day under the Malaysian sunshine and without reigning MotoGP World Champion Marc Marquez, who is recovering from a broken right leg sustained in a motocross training accident, there was a number of surprises on the timing sheets on day one. 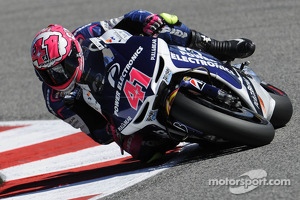 Bautista was fast all day long and after some 51 laps, the Spaniard registered the fastest day one time of 2m 00.848s that was just good enough to stay ahead of Espargaro on the Open Class Yamaha machine with his lap of 2m 00.900s enabling him to keep ahead of his MotoGP rookie sibling Pol who has also impressed on his first day with a best lap of 2m 00.999s.

There was also good news for the Ducati Team with Andrea Dovizioso taking fourth spot with a lap of 2m 01.029s who finished ahead of Yamaha Factory Racing’s Jorge Lorenzo (2m 01.158s), Dani Pedrosa (Repsol Honda) with a best time of 2m 01.160s and Valentino Rossi on the second of the Yamaha Factory Racing machines with the seven time MotoGP Champion setting a best time of 2m 01.349s for 7th place.

Stefan Bradl sits in eight place after day one with the LCR Honda man setting a best time of 2m 01.491s with Bradley Smith close behind on the Monster Yamaha Tech 3 machine with 2m 01.644s lap while Nicky Hayden performed much better on his Open Class Drive M7 Aspar Honda with the 2006 MotoGP Champion in 10th place with a best time of 2m 02.227s. 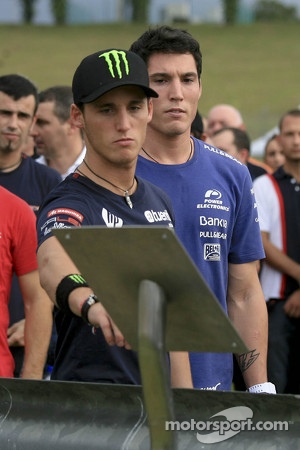 The Energy TI Pramac Racing team saw Yonny Hernandez register a best time of 2m 02.823s with Hector Barbera setting a 17th placed lap of 2m 02.975s for the Avintia Racing outfit. Randy De Puniet was back on track testing Team Suzuki’s MotoGP racer that the Japanese manufacture will campaign in the 2015 championship – De Puniet set a fastest lap of 2m 03.341s after a gruelling 73 laps. Scott Redding was off the pace somewhat today with the GO&FUN Honda Gresini Open Class rider setting a best lap of 2m 03.553s.

Michele Pirro was back on track today in his testing role for the Ducati Team and the Italian rider set a best lap of 2m 03.991s with Yamaha Test Rider Katsuyuki Nakasuga close behind on a 2m 04.165s lap. Mike Di Meglio set a best lap of 2m 04.885s ahead of Cardion AB Motoracing’s Karel Abraham (2m 05.638s) and the second Team Suzuki MotoGP machine in the hands of Nobuatsu Aoki who set a best time of 2m 07.302s.

Back to business for Yamaha as Sepang Two begins