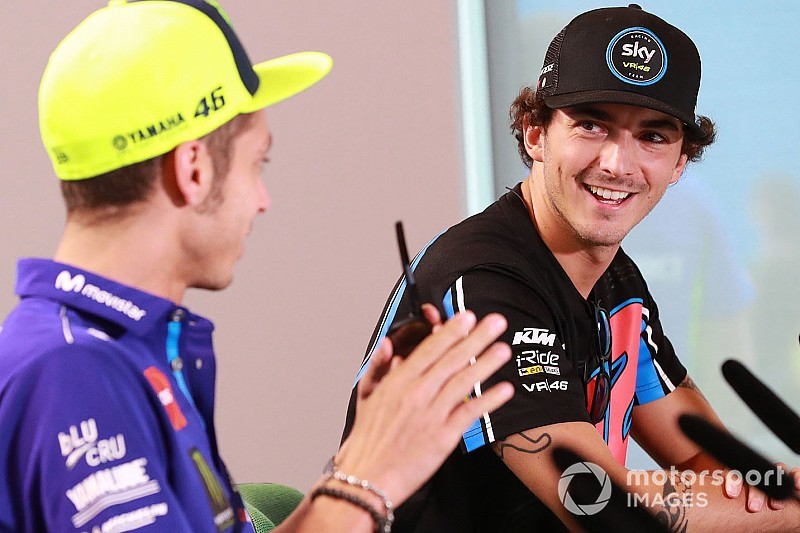 Newly-crowned Moto2 champion Francesco Bagnaia has revealed that he gave up an opportunity to move to MotoGP in 2018 to try to win the intermediate category instead.

Bagnaia, who is part of Valentino Rossi's academy, was the top Moto2 rookie last year in fifth overall.

While the Italian said that he turned down a chance to graduate to MotoGP as early as 2018, he signed a deal to join Pramac Ducati for 2019 already before the start of the season.

"I had the possibility this year to go in MotoGP but I was thinking that was better to try to win it [Moto2] because all the team was able to win, the bike was able, we can make a greater work than last year," said Bagnaia.

"I've signed [with Pramac] without any victories in Moto2 and the people say, 'why do you move to MotoGP, you've never won,' a lot of journalists said that.

"For me it was clear to sign already this year because was better, I had a good opportunity from Ducati and Pramac.

"I was thinking that was better for have clear mind all year, no thinking about next year. It has been the key I think because this year when I started I already had contract in MotoGP and I was fully concentrated on Moto2.

"It has been my strongest point I think, because I was always thinking just on Moto2 to win."

Bagnaia reckons his victory at the Red Bull Ring, where he beat his main rival Miguel Oliveira, was key to his title.

"I think that the championship has been mine after the race in Austria because I took the leadership and I push until Japan for have a great gap in Malaysia," he reflected.

"The most beautiful win this year Qatar because was the first one, but also Austria because is when we have taken the leadership and has been the most important, I think."

For 2019, Bagnaia said he will "start from zero" as he moves up to the premier class, and that he targets a similar rookie season that he had last year in Moto2.

"For sure moving to MotoGP is like starting again from zero because is something completely different, you have to start working more again on the bike," he said.

"Ducati gave to me all what I asked and was pushing a lot for having me and this is something important to start a new adventure.

"Ducati is the bike that I always want because for me is the most beautiful and now we have seen that this year is one of the strongest also.

"I am very happy to start a new adventure, I want to understand all the new things I have to understand to learn and make my best like last year, the first year in Moto2.

"I am with the top best riders in the world and first of all I am riding with Valentino in the same moment and this is something too big."