Ducati’s Francesco Bagnaia headed 2021 world champion Fabio Quartararo on the final day of MotoGP running for the year at the Jerez test.

Though conditions were dry for the start of the final day of MotoGP running of the year, the wind had picked up and would prove problematic for the rest of the day.

Honda's Pol Espargaro was first out on track on the 2021 RC213V before switching to one of the two 2022 prototypes he had to evaluate.

But it would be Honda stablemate Takaaki Nakagami – who topped Thursday's action – who would end hour one fastest with a 1m37.672s, as he put more miles on his LCR-backed 2022 RC213V.

By the end of hour two 2021 championship runner-up Bagnaia had taken over from Nakagami with a 1m36.872.

The Ducati rider had various items to try on his 2022 GP22, including a new engine and fairing, and feels the Italian manufacturer is improving an "already perfect" package.

Bagnaia's time would go unchallenged through to the end of the eight-hour test session, beating world champion Fabio Quartararo by 0.452 seconds.

The Yamaha rider tried a new chassis on Friday on top of the various other items the Japanese marque have brought to Jerez for its 2022 challenger, but once again felt like no real improvement over the 2021 bike has been made. 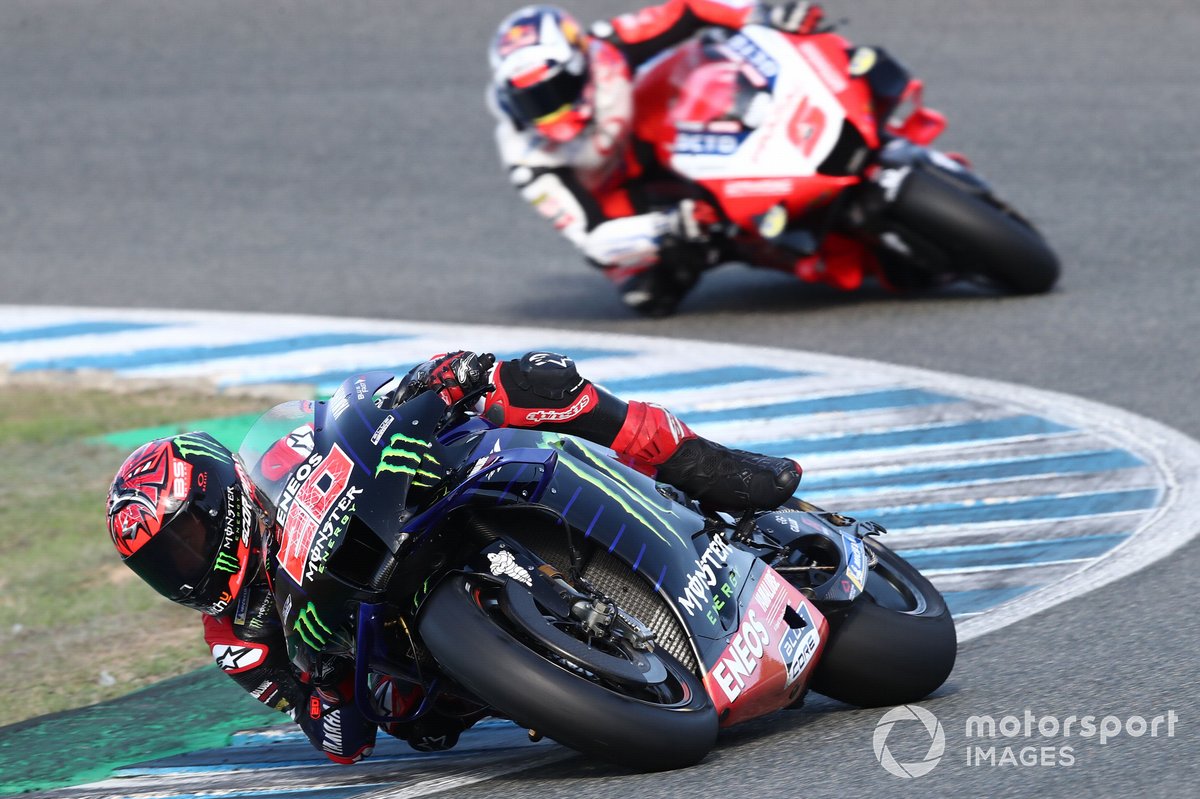 Quartararo headed Suzuki's Alex Rins, who crashed at Turn 6 at the start of the day, but was able to complete 59 laps as he put the 2022 GSX-RR – which included a new chassis – through its paces.

Espargaro was the top Honda runner in fourth with a 1m37.496s after 46 laps on his RC213V, with Maverick Vinales completing the top five on the factory Aprilia.

Joan Mir trailed him by 0.012s on the other Suzuki, with the 2020 MotoGP world champion pleased with the steps made by the Japanese marque with its 2022 bike – noting the new engine has a bit more power.

Brad Binder was the fastest of the KTM's in 11th with a 1m37.942s, with VR46 Ducati rider Luca Marini and Andrea Dovizioso behind him, the latter putting more miles on the 2022 RNF Racing-run Yamaha.

Fabio Di Giannantonio was the fastest of the rookies in 19th on his Gresini Ducati, the Moto2 graduate 1.656s off the pace ahead of Tech3's Raul Fernandez – who had his day interrupted by a technical issue on his KTM.

Reigning Moto2 world champion Remy Gardner found well over a second in lap time from Friday to end the test 22nd and 1.8s off the pace, while VR46's Marco Bezzecchi and RNF's Darryn Binder – who had a crash – brought up the rear of the field.