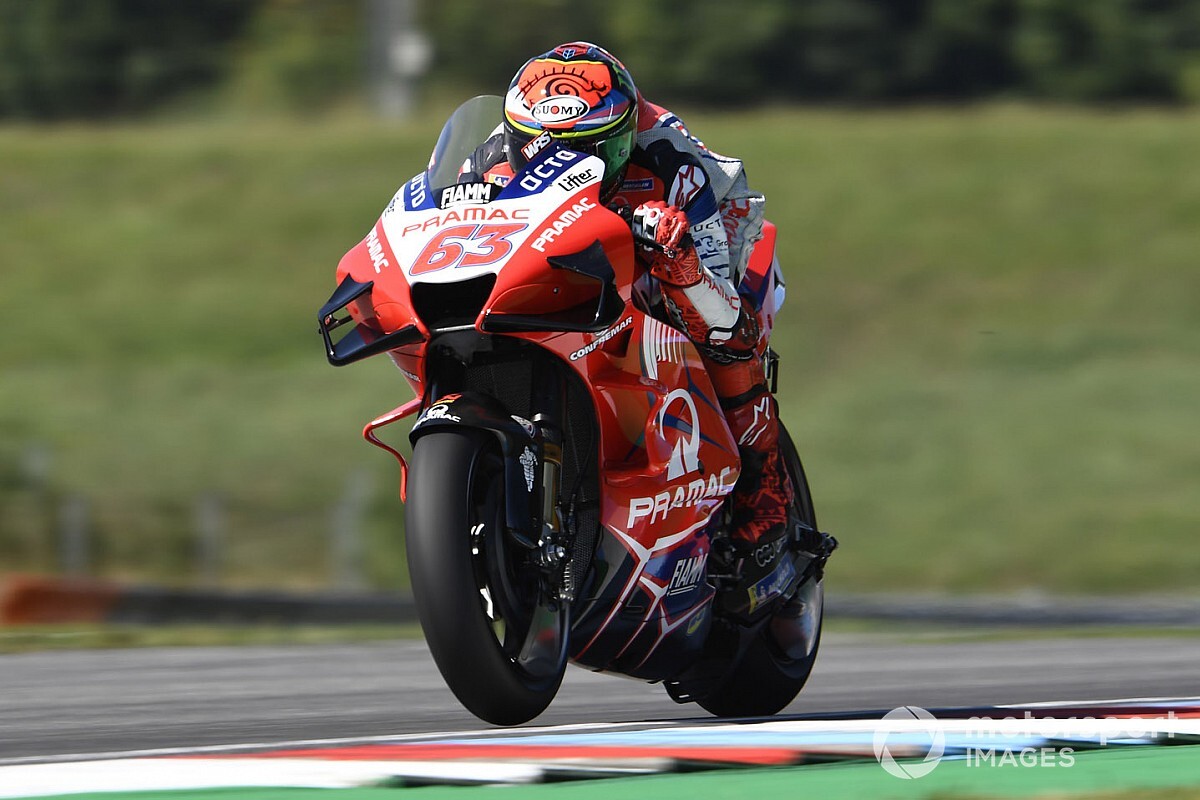 Pramac Ducati rider Francesco Bagnaia will miss this weekend’s Czech Grand Prix after fracturing his right knee in a crash during Friday practice at Brno.

The Italian suffered heartbreak at the Andalusian GP at Jerez last month when an engine issue robbed him of a likely maiden podium finish while he ran second.

Tipped to be in podium battle this weekend and at the subsequent Austria double-header at venues well suited to the Ducati, Bagnaia was dealt another blow on Friday morning at Brno.

After crashing at Turn 1 towards the end of FP1, Bagnaia was taken to hospital in Brno for checks on a suspected knee fracture.

Pramac boss Fracesco Guidotti confirmed on the MotoGP world feed that Bagnaia would sit out this weekend’s race, and expects him to miss next weekend’s Austrian GP too.

Pramac and Ducati has now confirmed Bagnaia will return to Italy for surgery on his leg after fracturing his right tibia, and will be out for at least two races.

“The radiographs show a fracture in the tibia, which will certainly have to be operated on,” Guidotti said. “Now he is doing the magnetic resonance to see if there is involvement of the ligaments [in the injury].

“As soon as we have more detailed information, we will decide how, where and when to operate, but certainly the fastest way possible.

“He will return to Italy 100 percent, where it is still to be decided on the type of operation to be done.”

Bagnaia is the latest in a growing list of riders who have injured themselves in 2020, the most notable being reigning champion Marc Marquez, who was forced to miss the Andalusian GP after breaking his right arm in the Spanish GP.

Marquez was forced to undergo a second operation on Monday after the Honda rider broke the titanium plate opening a window at his home in Spain and is out of action at Brno.

LCR Honda’s Cal Crutchlow fractured a wrist in a crash at Jerez last month, while Suzuki’s Alex Rins fractured and dislocated his left shoulder. Both had to miss the Spanish GP, but were back in action at the second Jerez race.

Ducati test rider Michele Pirro is favourite to fill in for the injured Bagnaia in Austria, with that decision to be made either today or Saturday according to Guidotti.