Sunday’s 25-lap Thailand GP was delayed by almost an hour due to torrential rain, which led to MotoGP’s second wet race of the year.

The first one in Indonesia back in March saw Bagnaia struggle to a distant 15th, while he was over two seconds off the pace in a wet qualifying in Japan last weekend.

As a result, Bagnaia was “upset” when conditions turned on Sunday ahead of the Buriram race – but says teammate Miller offered him advice which he used to score a crucial third place to reduce his championship deficit to just two points.

“Sincerely, I wasn’t so happy,” Bagnaia admits ahead of Sunday’s race.

“This morning in the warm-up I started with the tyres I’d use for the race and everything was perfect, I was able to do a good pace.

“So, I was perfect for the race. Then when I see after Moto2 race that it was starting raining, I was a bit upset.

“So, I had the luck Jack came to me and gave me some advice.

“This is good. With a team-mate I think it will be difficult to have this situation, but I hope with Enea [Bastianini] we can do this next year. It was more or less to believe in myself in the wet.” 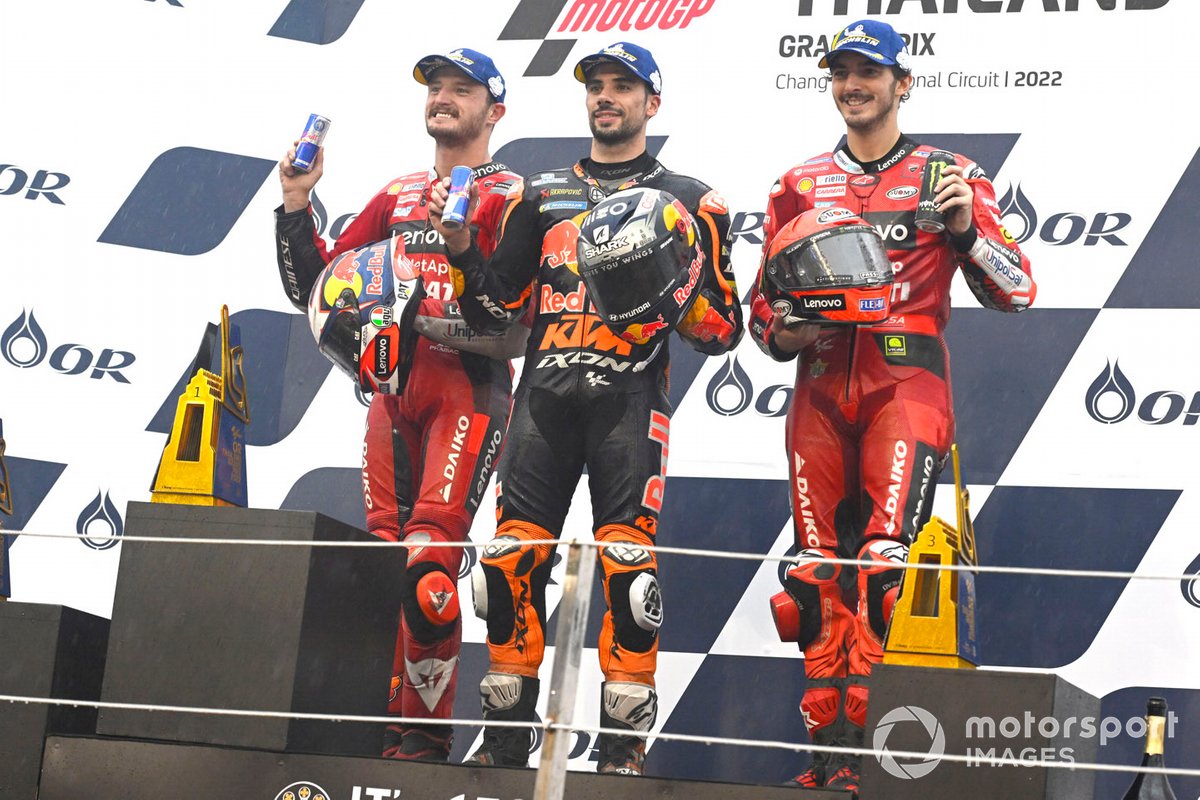 Pramac’s Johann Zarco revealed that Ducati had issued its riders instructions to be cautious battling Bagnaia for positions that weren’t podiums as not to jeopardise his title hopes.

Zarco hounded Bagnaia in the latter stages in Thailand but admitted he deliberately didn’t try to force an overtake due to the risk.

Yamaha’s Fabio Quartararo – who cancelled all of his media duties on Sunday – struggled to 17th in the race, allowing Bagnaia to close the gap to just two points with three races to go.

Bagnaia, who up until now has been reticent to allow championship thoughts to dictate his races, says he now must be “very intelligent” coming into the final three races.

“For sure now it will be more intense,” Bagnaia said of the title race.

“The last three races I will have to be very, very intelligent and smart in all of the situations because I think our potential is very high but I can’t make mistakes like I did in Japan or before the summer break.

“So, be smart, try to understand every situation. We already know in Australia the forecast will be very cold, so we will have to adapt. But anyway, I think we can be very competitive.”