Ducati’s Francesco Bagnaia admits he was “angry” he’d pitted for his wet bike when he started the final lap of the MotoGP Austrian Grand Prix in 10th before finishing second.

Bagnaia was part of the leading group which pitted on lap 25 of 28 of Sunday’s crazy Red Bull Ring race when the rain fell harder.

The Ducati rider began the final lap 27.3s behind eventual winner Brad Binder – who’d stayed out on slicks – down in 10th, before putting in a lap 15s quicker than the South African as he overtook nine riders to claim second.

But Bagnaia admitted he regretted his decision to pit initially when he started the final lap, stating: “I was angry when I started the last lap because I was P10, I was seeing that far, far away that there was a group, but I was not thinking it was a nine-rider group.

“I arrived to them, I overtook Taka [Nakagami] in the braking of Turn 4 and I think the other riders from Turn 6 to Turn 7.

“It was nice. I overtook [Iker] Lecuona in Turn 8 and then nobody was in front.

“I was not thinking I was on the podium because I just counted six riders, so I thought I was fourth, but then when I look at the big screen I see that I was second, so I was a bit happier.

“But the first feeling was I was angry at the start of the lap.” 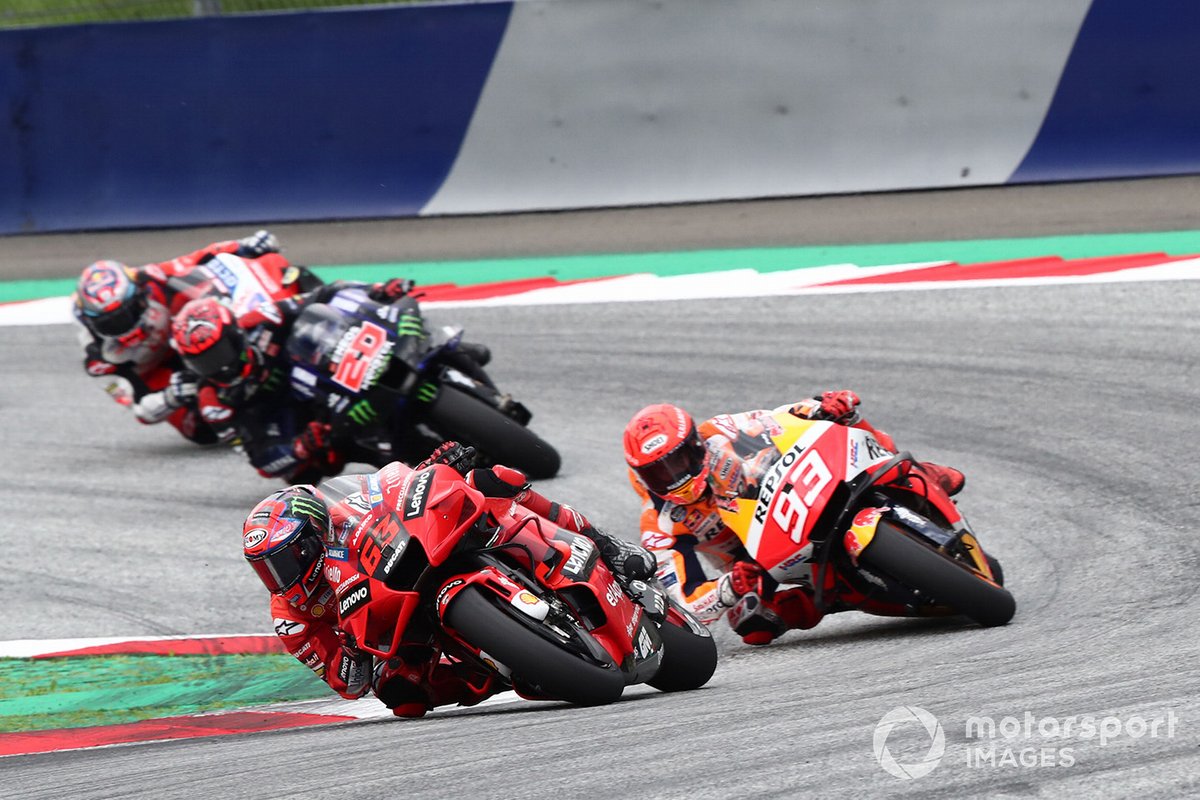 Bagnaia also revealed he let Marc Marquez go in front of him in order to follow what he did in the conditions, with the Honda rider’s decision to pit on lap 25 prompting Bagnaia to do the same.

The Italian’s Ducati teammate Jack Miller came in for his wet bike on lap 22 when the rain had just started to fall, couldn’t capitalise on the gamble and finished a distant 11th.

However, having struggled with rear grip during the dry part of the race and dropping to eighth at the start of lap 22, Miller says he was forced into the gamble.

“I felt I rode really well today, I just didn’t have the performance to stay with the other guys,” Miller said.

“They were riding quite well. I really fought all the way to the end, and I was really suffering a lot towards the end of the race.

“I kind of had to throw a joker at it, I saw the rain at the top of the hill with like six laps to go.

“So, I was like ‘I’m going to have to do it’, just try it and see what happens because it was the only hope I had to maybe put the wets on a little earlier and it bucket down and we’d be able to pass the other guys, whether they would be on track or making the pitstop.

“But it wasn’t to be, unfortunately.

“It just wasn’t our day, so we keep moving forward and we don’t give up.

“We’re still there, at least we finished the race. Not what I wanted, not what the team wanted, for sure not what I needed. But we won’t give up, we’ll keep working.”

Rossi 'retiring, but not giving up' after Austria podium near-miss