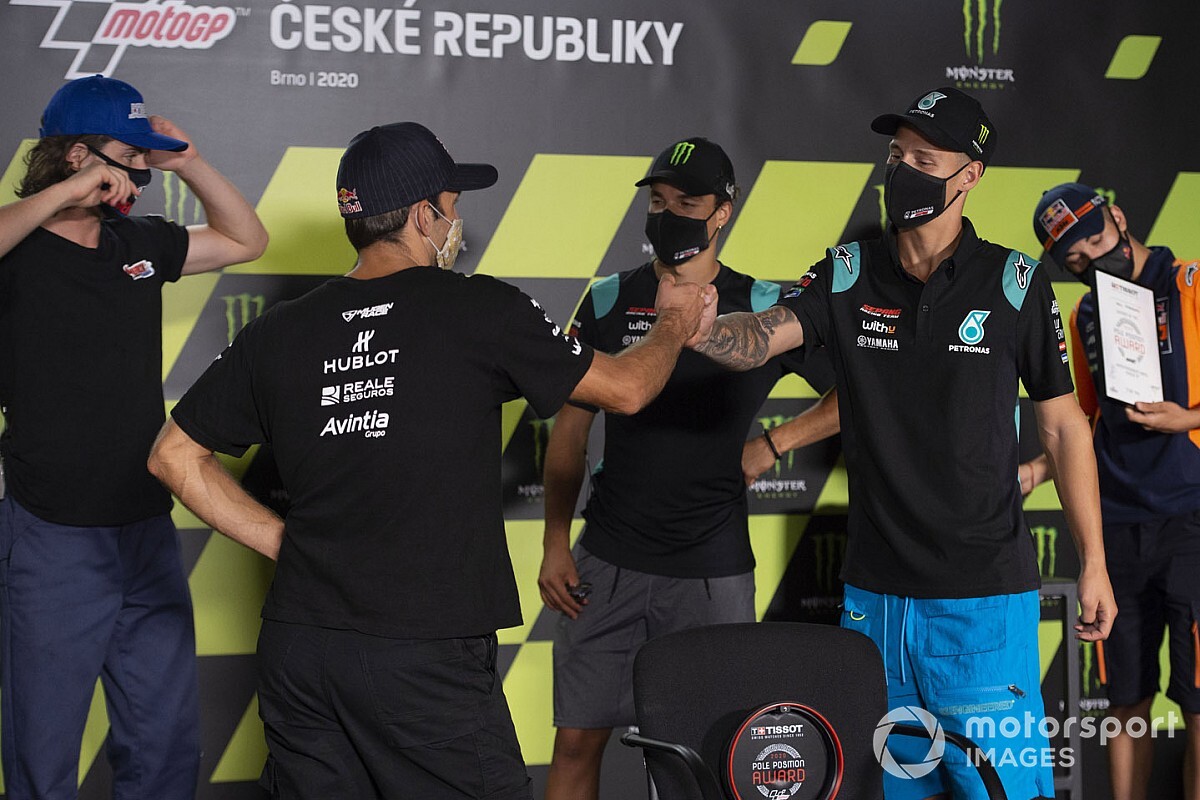 The Avintia MotoGP team has apologised to Fabio Quartararo for celebrating when he crashed in Czech Grand Prix qualifying, which guaranteed Johann Zarco a shock pole.

Zarco fired in a 1m55.687s in the closing stages of Q2 on Saturday to take over top spot on his year-old Ducati run by the Avintia squad (now calling itself Esponsorama Racing).

This came under threat from championship leader Quartararo at the end, though the Petronas SRT rider crashed at the penultimate corner.

World feed cameras caught the Avintia team celebrating at this moment, as it secured the team its first pole in MotoGP.

The team has since apologised for the impression its celebrations left.

“The Esponsorama Racing team would like to apologise for the impression it may have made through the television images celebrating the crash of Fabio Quartararo,” a team statement read.

“The team expressed its great joy at how incredibly close it was to achieving its first pole position since its debut in the MotoGP class in 20 years.

“Again, we would like to apologise to Fabio Quartararo and Yamaha Petronas. Vive la France!”

Sunday’s Czech GP will be the first time Zarco will start from pole since the 2018 Malaysian GP, when a penalty for Marc Marquez promoted the then-Tech3 rider to the head of the grid.

But Saturday’s pole at Brno represents his first proper top spot in qualifying since his home round at Le Mans in 2018.

Zarco said on Saturday after qualifying that the pole came as a “surprise”, and admits it was a “bigger step than we planned” in his adaptation to the Ducati.

"As I say the step I am now in my learning journey, being in the top five will be a huge result,” he said.

"So, things are coming back, but I need to accept every step.

"Today is a bigger step than what we planned, so we take it, it's always a positive.

"But tomorrow maybe beginning of the race, starting with the top guys, will be a huge help to be fast and then the tyre will drop and we'll see how to manage it."