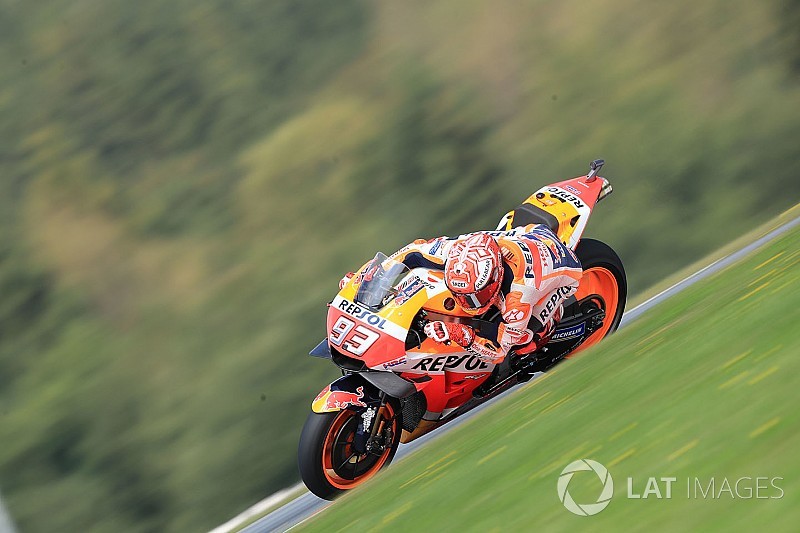 Marc Marquez dominated a damp Saturday morning MotoGP practice session in Austria, while Valentino Rossi will be forced to take part in the first part of qualifying.

The session was held under damp, drying conditions with the majority of the riders starting on wet tyres and Jorge Lorenzo dominating the early stages.

However, it only took 12 minutes for the track to be quicker on slicks when Rossi outpaced the Ducati rider.

The top time was continuously lowered before Lorenzo retook the lead with a 1m30.687s, a time still nearly seven seconds slower than Andrea Dovizioso's benchmark from Friday.

Despite the track getting drier, Lorenzo led for nearly 20 minutes when Jack Miller finally demoted him, only for Marquez to go a second faster a lap later.

Marquez then improved significantly one more time and his 1m26.396s was unreachable for the rest of the field, ending up topping the session by 1.7s.

A trio of British riders followed Marquez with KTM's Bradley Smith taking second, ahead of Scott Redding and Cal Crutchlow.

Dovizioso was seventh as the top 10 was completed by Alex Rins, Hafizh Syahrin and Maverick Vinales.

Lorenzo and Rossi were only 14th and 15th respectively and, with nobody improving on their FP1 times, the latter is forced to take part in Q1, having only finished 11th in the opening practice of the weekend.

The 10 riders to automatically make it to Q2 are the three Ducati GP18s of Dovizioso, Lorenzo and Danilo Petrucci, Honda trio Marquez, Dani Pedrosa and Crutchlow, the Yamahas of Johann Zarco and Vinales, as well as Andrea Iannone (Suzuki) and Tito Rabat (Avintia Ducati).

Austria the worst track of the year for Yamaha – Rossi