Australia MotoGP: Vinales on pole by half a second 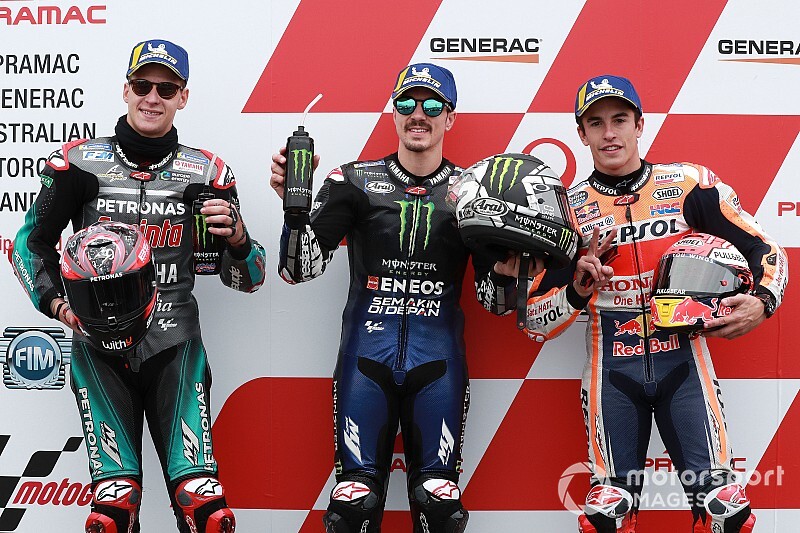 Yamaha MotoGP rider Maverick Vinales put on a dominant display in qualifying for the Australian Grand Prix to claim pole position by a more than half a second from Fabio Quartararo.

Vinales built on the pace he showed earlier in the weekend, breaking into the 1m28s barrier on his first run to put him comfortably on provisional pole heading into the mid-session lull.

After returning to the track, Vinales immediately posted a minor improvement to pull himself further clear of the field, before finding yet more time on his final two laps.

With neither Petronas Yamaha's Quartararo nor Honda’s Marc Marquez making any progress in their second runs, Vinales’ time of 1m28.492s put him comfortably on pole and ensured he continued his unbeaten record of the weekend.

Quartararo and Marquez will line up alongside Vinales on the front row, with Valentino Rossi posting a late improvement on the second Yamaha to catapult himself up to fourth.

Danilo Petrucci was Ducati’s top qualifier in fifth ahead of LCR Honda’s Cal Crutchlow, while Aleix Espargaro and Andrea Iannone qualified seventh and eighth on a strong day for Aprilia.

Pramac’s Jack Miller was ninth fastest on home turf, ahead of the factory Ducati of Andrea Dovizioso.

Petronas Yamaha's Franco Morbidelli finished 11th, while Alex Rins was classified 12th and last of the Q2 runners in a disappointing session for the Suzuki rider.

Quartararo set the initial pace in Q1, with Suzuki’s Joan Mir also provisionally earning himself a Q2 berth after the first runs.

However, while Quartararo safely progressed to the final part of qualifying, Mir was bumped out by the Aprilia of Iannone by 0.157s.

Johann Zarco qualified a further two tenths behind in his first qualifying session for LCR Honda and will line up 13th, just ahead of Pramac Ducati’s Francesco Bagnaia.

Factory Honda rider Jorge Lorenzo’s trying campaign continued as he qualified 19th for the fourth race running, only ahead of the crashed Tech 3 KTM of Hafizh Syahrin and the Avintia Ducati of Tito Rabat.

Syahrin’s teammate Miguel Oliveira took no part in qualifying after he was declared unfit due to bruises sustained in a crash during Saturday’s fourth practice.

Australian GP - the race as it happened