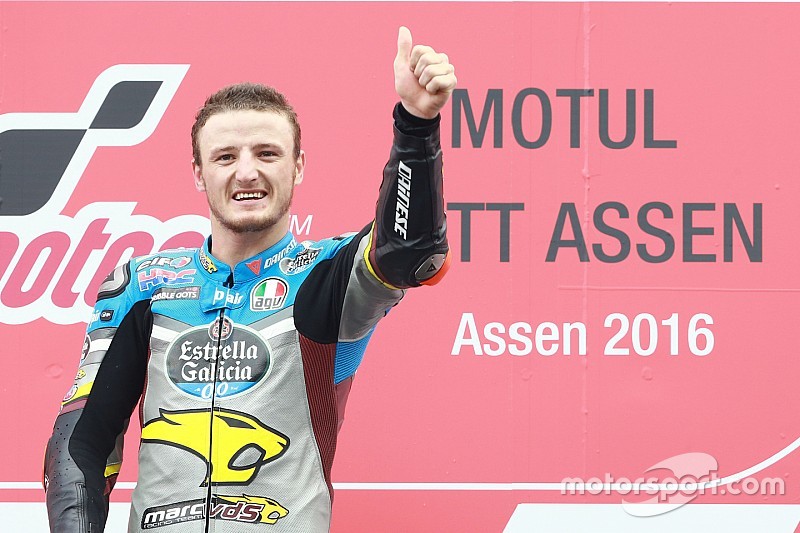 The race started wet but drying, with Yonny Hernandez surging through to the lead on soft-compound tyres, before he crashed out.

Renowned wet-weather ace Danilo Petrucci was the next unlikely leader, and he was out front when the race was red flagged due to a biblical rainstorm.

The early laps of the 12-lap restart were remarkable, as second-placed Andrea Dovizioso – who twice started from pole – crashed out from second and then Valentino Rossi tumbled out of a handsome lead.

This handed the race to Honda, and it was Miller’s satellite Marc VDS machine that burst past two-time champion Marquez’s works version in a brave move at the chicane. Miller had restarted down in eighth, but starred when it truly mattered.

Reigning champion Jorge Lorenzo, who admits he struggles in wet conditions, struggled throughout but managed to salvage an important points finish in 10th.

At the start, Redding jumped into the lead briefly on his Pramac Ducati from Rossi and Dovizioso, but Redding ran wide at Turn 1 and dropped to seventh.

Hernandez was the man on the move early on, the fastest man on track, surging up to third by Turn 1 on lap two, as Pedrosa pushed Lorenzo down to seventh.

Marquez retook fourth from Aleix Espargaro, with Iannone also on the march from his back-of-the-grid start. He was up to seventh by lap two.

Hernadez’s Aspar Ducati, which was running soft tyres all round unlike the frontrunners, hit the front on lap three, surging past Dovizioso and Rossi to lead.

Lorenzo tumbled down the order as his rivals improved their laptimes. He was soon down to 17th, and out of the points.

Petrucci also came into his own at this stage on his Pramac Ducati, having starred at a wet Silverstone last year. He too was on soft/soft compounds and rose to fourth by lap five as the track continued to dry.

Hernandez managed the gap like a veteran once out front, holding a 2s buffer to Rossi, who still had Dovizioso for company. Behind Petrucci, Iannone passed Marquez for fifth after a fierce battle. Redding who was on a soft front, ran seventh.

Just as the track seemed certain to dry, a rain shower hit the track after nine laps.

Dovizioso passed Rossi for second as the rain intensified, but was 2.6s behind Hernandez.

But the Hernandez fairytale story ended when he crashed at Turn 1 just before half distance, falling to 16th.

The field was reset with Dovizioso leading by 1.4s over Rossi, who had Petrucci right with him. Redding jumped up to fourth, ahead of Iannone and Marquez as rain bucketed down, making the track full wet again.

Iannone crashed out next, from fifth position. This promoted Cal Crutchlow to sixth, ahead of Pedrosa.

Petrucci and Rossi battled hard, bringing them right up to leader Dovizioso. Redding – by far the fastest man on track – joined the party too.

Petrucci and Redding passed Rossi, and then Petrucci hit the front with 12 laps remaining.

The red flag was then thrown, with the order Petrucci leading Dovizioso.

But both Petrucci’s pass on Dovizioso and Redding’s pass on Rossi were reversed (as results were taken from the lap before), so the race would restart in the order Dovizioso, Petrucci, Rossi, Redding, ahead of Pedrosa, Marquez, Crutchlow, Miller, and the Aprilias of Alvaro Bautista and Stefan Bradl.

“After seven laps, it was getting dry,” said Petrucci during the break. “Then it rained heavy, heavy – and it was quite difficult with spinning in fifth and sixth gear on the back straight. There was too much water to see the track, it was a safety decision.”

Redding reported: “It was terrible, I couldn’t see. The rain was so hard it was sticking to the visor, I had to look under the gap, it was quite scary. I was getting a lot of spinning on the rear tyre.”

Dash to the flag restart

With the storm passed, the race restarted in still-wet conditions.

From his second pole of the day, Dovizioso led Rossi, Marquez, Petrucci, Crutchlow, Redding and Pedrosa. Marquez briefly hit the front at Turn 1, but overshot.

Miller then surged up to fourth, as Pedrosa dropped his Honda at Turn 9. Crutchlow followed suit at Turn 12 a few turns later.

Rossi then hit the front before the end of the opening lap, leading Dovizioso, Marquez and Miller. The Tech 3 Yamahas burst into the top six, Pol Espargaro ahead of Bradley Smith as the star of race one, Petrucci, ground to a halt. Smith crashed at Turn 15.

Dovizioso tumbled out of second place in spectacular style at Turn 12 on lap two, and Rossi did likewise – falling from a convincing lead over Marquez. The front-end of his Yamaha folded underneath him at just 80kph. Aleix Espargaro was the next to fall.

The race was now a straight fight between Marquez and Miller, and Miller hit the front at the chicane with nine laps to go. Pol Espargaro ran third, ahead of Redding and Iannone.

Redding passed Espargaro for the bottom step of the podium on the penultimate lap, but this was a race that was all about Miller’s breakthrough first victory in the most sensational of circumstances.