Coming into the Assen weekend 91 points behind Quartararo after two-successive DNFs, Bagnaia’s title hopes were boosted by an early crash for Quartararo that also forced Aleix Espargaro off track.

Poleman Bagnaia got the jump on the field off the line to take the holeshot into Turn 1 as Quartararo ran wide, allowing Espargaro and Jorge Martin through.

Quartararo recovered third from Martin immediately at Turn 3 and scythed through on Espargaro into Turn 5.

But Espargaro retaliated into the fast Turn 6 right-hander to take second back from the championship leader as Bagnaia’s lead stretched to close to a second over the first tour.

Quartararo shadowed Espargaro for the next three laps before launching his raid on the Aprilia rider into Turn 5 on the fifth tour.

But the Yamaha rider crashed as he attempted the overtake and clattered into Espargaro, forcing the Spaniard into the gravel.

Quartararo re-joined the race at the back of the pack on his damaged Yamaha and pulled into pitlane at the end of lap nine before returning to the circuit.

But his day would soon go from bad to worse as he suffered a nasty highside exiting Turn 5 on lap 13, marking his first race retirement since Valencia 2020. 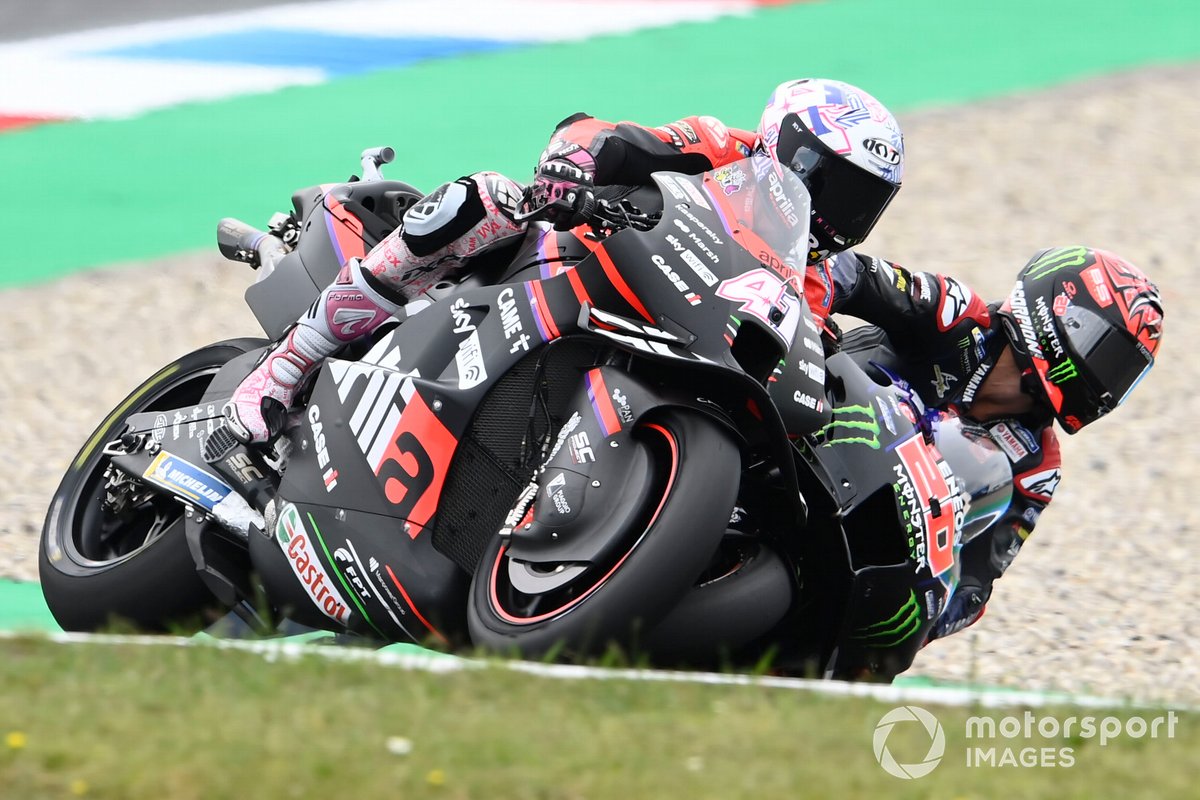 The Quartararo/Espargaro incident will be investigated after the race, while it allowed Bagnaia to move 1.4s clear of VR46 Ducati rookie Marco Bezzecchi, who elected to run the soft rear tyre instead of the hard that Bagnaia selected.

Bagnaia’s lead would come under a second over the ensuing laps and remained fairly stable as Pramac’s Jorge Martin unsuccessfully tried to pressure Bezzecchi ahead into a mistake.

The podium battle took on a new twist on lap 17 when light rain began to fall on the back half of the Assen circuit, which prompted Martin’s pace to drop off as Aprilia’s Maverick Vinales came through to third through the fast Turn 15 left-hander at the end of the lap.

Ducati’s Jack Miller – who served a long lap penalty on the fourth tour for blocking Vinales in qualifying - and KTM’s Brad Binder, experts in iffy conditions, further demoted Martin on lap 17 and 18 as they pushed for the final podium spot.

The brief rain shower cleared up across the remaining few laps, with Bagnaia streaking clear by almost two seconds at one stage to claim his third win of the season to arrest a barren run of back-to-back DNFs and offer his title challenge a glimmer of hope.

Bezzecchi made no mistakes to claim his first MotoGP podium and the first for the VR46 squad, while Vinales registered his maiden Aprilia rostrum one year after his final one with Yamaha on the weekend he decided to quit the Japanese manufacturer for 2022.

Espargaro was left down in 15th after the Quartararo incident, but carved through the field to salvage fourth with a stunning last-corner double overtake on Binder and Miller on the final lap.

The Aprilia rider’s recovery job means he is now just 21 points behind Quartararo in the standings.

Binder snatched fifth from Miller after slight contact between the pair in the Espargaro overtake on the last lap, while Martin faded to seventh.

Joan Mir recovered from 14th on the grid to finish eighth on his Suzuki, surviving pre-race contact with KTM’s Miguel Oliveira while he was lined up on his grid slot, and another touch with VR46’s Luca Marini off the line.

Oliveira was ninth at the chequered flag, with Alex Rins completing the top 10 on the second Suzuki ahead of Gresini’s Enea Bastianini and LCR Honda’s Takaaki Nakagami – who had to serve a long lap penalty for exceeding track limits.

Andrea Dovizioso was the only Yamaha to get to the finish, but the RNF Racing rider was only 16th, with the Japanese marque suffering a pointless grand prix one week after Honda went through the same.

Raul Fernandez (Tech 3) pulled out late on with arm pump issues, while Darryn Binder (RNF) and Yamaha’s Franco Morbidelli both crashed out.