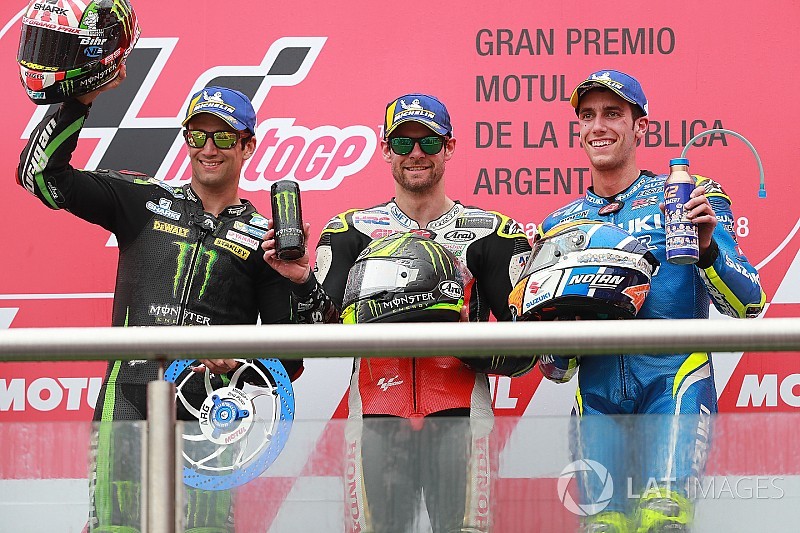 Cal Crutchlow triumphed in a surreal Argentina MotoGP race, which featured a bizarre start delay and a collision between arch-rivals Marc Marquez and Valentino Rossi.

LCR Honda rider Crutchlow prevailed in a breathless four-bike battle for victory, which was set up when a rampant Marquez was forced to serve a ride-through penalty from the lead after having stalled on the grid.

Marquez was charging through the pack when he came up on Rossi, and divebombed the Italian down the inside of Turn 13 - barging the Yamaha man out of the way and leaving Rossi to fall over on the wet grass.

Warm-up and the support races had taken place on a gradually drying track, but it was soaked again ahead of the main event, with all riders - except for poleman Jack Miller – lining up on the grid on wets.

But the track surface was drying quickly, and as the scheduled race start edged ever closer, riders began to pull into the pitlane en masse to switch to dry tyres.

As more and more riders abandoned their grid slots and began to queue up at the pitlane exit, Miller's Ducati GP17 was soon left as the only bike on the grid – only for the organisers to delay the start, citing safety concerns.

Following an impromptu team boss meeting, all riders but Miller were moved several rows back, leaving the Aussie all by himself at the sharp end of the grid.

The start was then briefly held up further as Marquez stalled and bump-started his Honda on the fully-formed grid before retaking his slot.

The buffer out front allowed Miller to keep the lead on the opening lap, but he was then quickly reeled and passed by a charging Marquez – who was two seconds clear when he was assessed a ride-through, which dropped him to 19th.

With Marquez out of the way, a top four of Miller, Alex Rins, Johann Zarco and Crutchlow broke away out front, escaping into the distance from the chasing pack led by Qatar winner Andrea Dovizioso.

The quartet ran in formation until Rins began to attack Miller, the pair trading the lead on several occasions before Rins made a move stick with nine laps to go – only to run wide a lap later and drop to fourth.

With six laps to go, Miller had a major moment at Turn 13, giving up the lead to Crutchlow and dropping back from the lead battle.

Zarco soon overtook Crutchlow, but the Brit returned the favour with a slipstream pass on the penultimate lap – and held on to claim his third MotoGP win.

Rins celebrated his maiden MotoGP podium in third behind Zarco, who equalled his best-ever finish, while Miller was forced to settle for fourth.

Marquez passed Maverick Vinales on the final lap to take fifth, but was assessed a 30-second penalty for his clash with Rossi, which dropped him down to 18th.

Marquez's Honda teammate Dani Pedrosa was among the race's three retirements, exiting with a highside crash on the opening lap after Zarco had nudged him wide.

Live: Follow the Argentina MotoGP race as it happens