On the third lap of Sunday’s race at the Red Bull Ring, KTM wildcard Dani Pedrosa crashed at the Turn 3 right-hander and his bike was left stranded on the racing line.

Savadori arrived at the scene unsighted and rode straight into the stricken KTM, which launched the Aprilia rider into the air as both bikes erupted in flames. The race was red-flagged while marshals cleaned up the scene, while Pedrosa walked away unscathed from the incident.

Savadori had to be helped away on a stretcher and was later diagnosed with a broken ankle, which he has now had surgery on and will miss this weekend’s Austrian GP at the same venue. 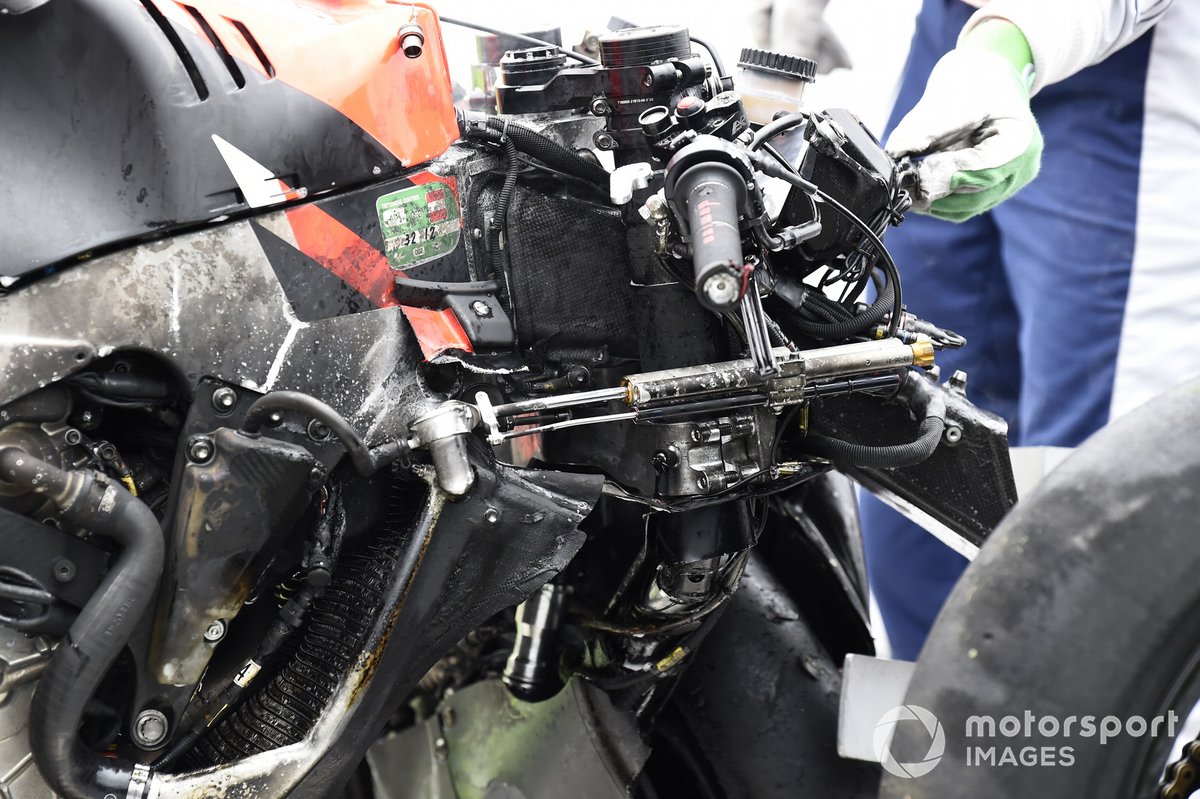 A brief statement from the team read: “Lorenzo Savadori has undergone surgery this afternoon at the Azienda Ospedaliero-Universitaria di Parma.

“The procedure has been performed by Professor Francesco Pogliacomi with Doctors Luca Guardoli and Emanuele Ciccarone, members of the team directed by Prof. Enrico Vaienti, with the support of Doctor Michele Zasa, Clinica Mobile Sanitary Director.

“The surgery has been perfectly successful and the rider will start the recovery straight away, in order to come back racing as soon as possible.”

Aprilia hopes to have Savadori back on the grid for the British GP at Silverstone at the end of the month.

Pedrosa restarted Sunday’s race and went on to finish an impressive 10th on his first MotoGP race since retiring from racing at the end of the 2018 season. The 31-time MotoGP race winner later told the media that he was “very lucky” to walk away from the incident unscathed as he too was left stranded on the racing line as bikes flew past him.

Safety at the Red Bull Ring was once again called into question following the incident, as this was the third MotoGP race in succession at the venue to be red-flagged for a serious incident.

However, many of the riders – while expressing well-documented concerns about track safety – agreed that the Pedrosa/Savadori incident wasn’t unique to the circuit.

Aprilia has made no mention of who will replace Savadori in the Austrian GP, though it opens the door for ex-Ducati rider and current Aprilia test rider Andrea Dovizioso to return to the grid.

The irony and vindication behind Martin's maiden MotoGP victory