Analysis: Was Phillip Island the best ever MotoGP race? 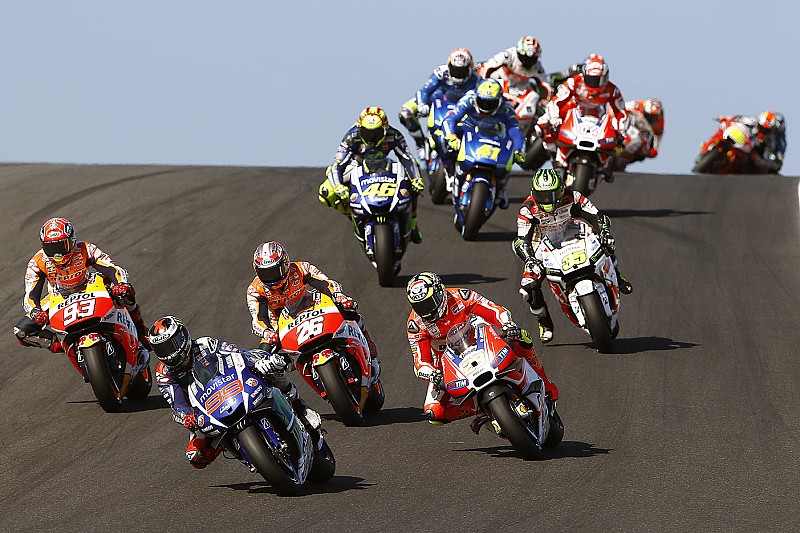 The riders themselves hailed last weekend’s Phillip Island MotoGP race as one of the best in recent memory – but was it the best of the championship’s four-stroke era? Jamie Klein investigates.

It was the race that had it all: four riders on three different makes of bike in winning contention, non-stop passing – even for the lead, jaw-dropping overtakes and a winner few would have predicted even at the start of the final lap. And that's before we get to seagulls.

For many, the epic four-way battle down under between Marc Marquez, Jorge Lorenzo, Andrea Iannone, and Valentino Rossi was the best MotoGP race they had witnessed for many years, and even the riders themselves were aware of the gravity of the contest they had participated in.

Marquez, who went from third at the start of the final lap to take a memorable win, reflected: "When I was looking at the Moto3 race, I say, 'I want to be there', because normally in MotoGP this never happens.

"But this race was one of the best in MotoGP and in my career, and to get my 50th victory with this kind of race is even is more special."

The defeated Lorenzo meanwhile reflected: "In the last laps I gave everything I have and it reminds me a little bit like in old times in 125cc, when it was similar.

"For the people watching, it was the best [race] this year and probably in the last five or 10 years."

Certainly, the Phillip Island race has to rank very highly among the best races since the start of the MotoGP era in 2002. But, was it the greatest yet of the 13-year two-stroke era?

What makes a race great?

To answer that, we need to consider what exactly makes a race great, and an obvious place to start is the closeness of the finish.

Split by just 0.249s at the chequered flag, the finish between Marquez and Lorenzo is close, but in the grand scheme of things not that close.

In fact, it's not the closest of the year so far – that was the Qatar season opener, where Rossi and Andrea Dovizioso were separated by a mere 0.174s.

You don't have to go back too far to find a finish closer than that, either: at Mugello last year, Marquez beat Lorenzo by only 0.121s, repaying the favour of being pipped by Lorenzo by only 0.081s the previous year of Silverstone.

Both of those races, of course, were two-way battles, while the Qatar and Phillip Island races of this year both boasted four main protagonists.

But, by that measure, it's tough to look beyond Mugello 2006, where as many as six riders had winning potential, although in the event Rossi took the flag by a relatively comfortable 0.575s.

Indeed, if you relied purely on the closeness of the finish to determine the greatest races, you'd also miss such classic encounters as Jerez 2005 and Laguna Seca 2008.

These were both races in which a classic duel ended in disaster for one rider (Sete Gibernau in the former, Casey Stoner in the latter) as Rossi prevailed, and The Doctor's fierce rivalries have certainly lent extra spice to many races.

Rossi v Gibernau at the Sachsenring and then at Brno in 2003, as well as Rossi v Biaggi at Welkom in 2004, are some good examples of close races made even better by the enmity between the protagonists.

In that department though, nothing can match the hostility that existed between Lorenzo and Rossi during their first stint as Yamaha teammates from 2008-2010, which produced countless close battles, for victory and otherwise.

Rossi's last corner pass on Lorenzo at Catalunya in 2009 means that remains the benchmark race for many, but let's face it – if it had been between, say, Dani Pedrosa and Lorenzo, it would not have lingered in the collective memory of MotoGP fans in the way it has done.

Arguably, the Catalunya race of two years earlier was even better, with Stoner pipping Rossi by an impossibly small margin of 0.069s and Pedrosa being just 0.390s back in a tense three-way scrap.

That had the added bonus of all three men being on different bikes, just like the top three at Phillip Island – although there have been even closer finishes between the podium finishers than that.

But what it lacked, besides the intervention of a seagull, was a last-lap change of the lead and title drama, both of which were crucial to making last weekend's race such a hit, even if the top four were only separated by a comparatively chasm-like 1.058s.

Does that make Phillip Island 2015 the greatest ever MotoGP race then? Not quite.

The Portuguese Grand Prix at Estoril in 2006 was, quite simply, a stunner. Not only was it the closest ever finish, its implications for that year's title race were profound.

Hayden arrived in Portugal with 12 points in hand over Rossi, but after being taken out by teammate Pedrosa in the early stages of the Estoril race would head to Valencia with an eight-point deficit, although it could very easily have been 13 if not for a certain Toni Elias.

The Spaniard pipped Rossi by the infinitesimal margin of 0.002s, the closest ever finish, to take a first and what would be his only premier class win, while Kenny Roberts Jr. was only 0.176s from giving his father's team the ultimate fairytale victory in third.

Had the underdog Iannone taken an unlikely maiden triumph at Phillip Island, perhaps last weekend's thriller may have just got the nod.

Still, 52 overtakes among the top four riders and 13 lead changes isn't too shabby...

Ducati backs Dovizioso to bounce back from “embarrassing” race