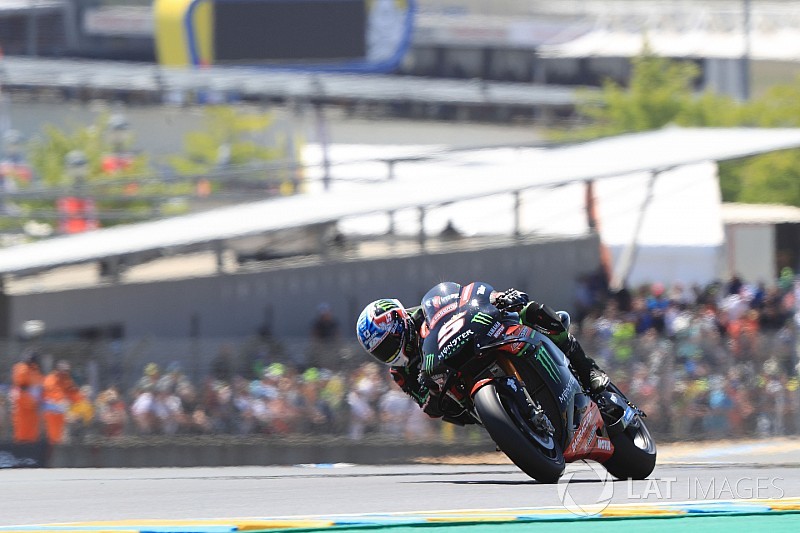 Johann Zarco was the star in qualifying on home turf at Le Mans, and on the evidence of his race pace the Frenchman also has a very good chance to take a long-awaited maiden victory in MotoGP.

The French Grand Prix was always going to be one of Tech 3 man Zarco’s best chances to take a first premier class win, as Le Mans is a track where the Yamaha has been the strongest in recent years.

It was going to be an all-Yamaha podium last year before Valentino Rossi’s dramatic crash.

While a repeat of such dominance this year is unlikely with Honda and Ducati both having riders with strong pace, Yamaha is definitely in better shape than it was at Jerez, where high attrition helped to mitigate what was a dismal race for the Iwata brand.

In general, there hasn't been much to split Maverick Vinales, Rossi and Zarco over the weekend so far.

Vinales’ 1m32.5-6s in FP1 was about one tenth better than the pace of Rossi and Zarco, but the Spaniard admitted to have gone into a wrong direction in FP2 and none of the Yamaha riders improved from the morning session.

In FP3, Vinales and Zarco moved into the low 1m32s on soft rear tyres, with Rossi a few tenths behind, but on a medium tyre.

But it was Zarco who maintained that pace in FP4, as Vinales and Rossi again lost a little speed in the hotter conditions of the afternoon.

Heat has been a big issue for Yamaha in the recent past. It was key to its Jerez woes, and the cooler conditions help explain why Yamaha is more competitive at Le Mans than it was in Spain.

In FP1 and FP3, track temperatures were in the low-to-mid 20s, with air temperature in the teens. By qualifying, it had only risen to 22 degrees C air temperature - not exactly scorching heat - but a cloudless sky and new tarmac meant track temps soared to 44 degrees.

The change was enough to turn, in Vinales' opinion, a bike able to contend for pole to one that was good enough only for the third row.

Sunday's weather forecast is similar to Saturday's, meaning Zarco should have the edge over Vinales and Rossi, whose disadvantage is increased by starting down the order.

However, Zarco will have to overcome plenty of competition from outside of Yamaha as well to grab that elusive win. 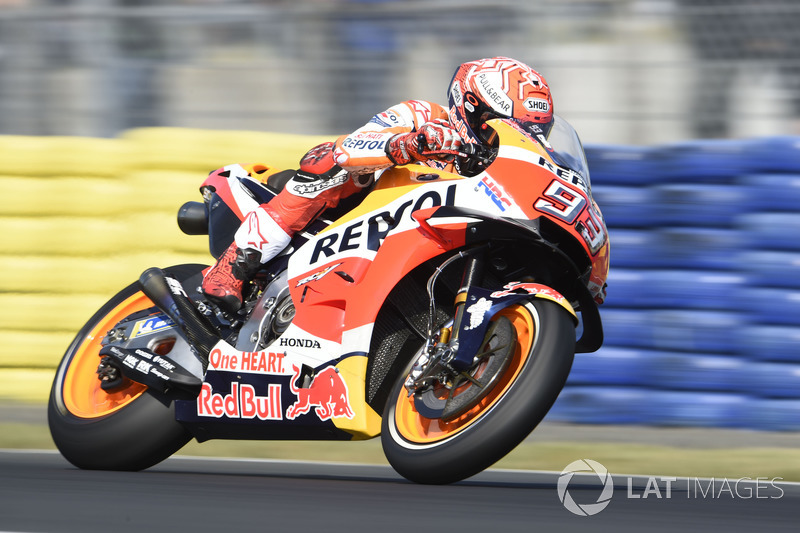 Firsly, there is the obvious threat of points leader Marquez, whose strong Le Mans form has more or less confirmed that he will be competitive at every race track this year.

Marquez is the only one who, looking at the sheer numbers, set a better laptime than Zarco in terms of race pace, with a 1m32.1s effort in FP2.

However, Honda has been enduring its least comfortable weekend of the season so far – Marquez has had plenty of wobbles and off-track moments, and he, along with Dani Pedrosa and Cal Crutchow, have all crashed at least once this weekend.

Marquez might have the pace to gun for victory, but he will risk a crash by pushing more than anywhere else before this year - and the Spaniard has already talked about settling for a podium finish in the race after qualifying.

"Tomorrow in the race day if for some reason Johann or Dovi is faster than us, I need to understand and finish in the podium," he said.

"Like we see today, we did a huge improvement from last year and we are better but we are not like in other race tracks.

Pedrosa and Crutchlow are unlikely to play a big role. Crutchlow was hospitalised after a nasty crash in qualifying and it will take a miracle for the British rider to race at full fitness.

Pedrosa meanwhile can now add a swollen hip, a legacy of his Jerez crash, to his list of injuries, which appears to have gotten long enough to truly compromise his competitiveness.

With Honda on the back foot, it could be left to Ducati to derail Zarco's victory ambitions. 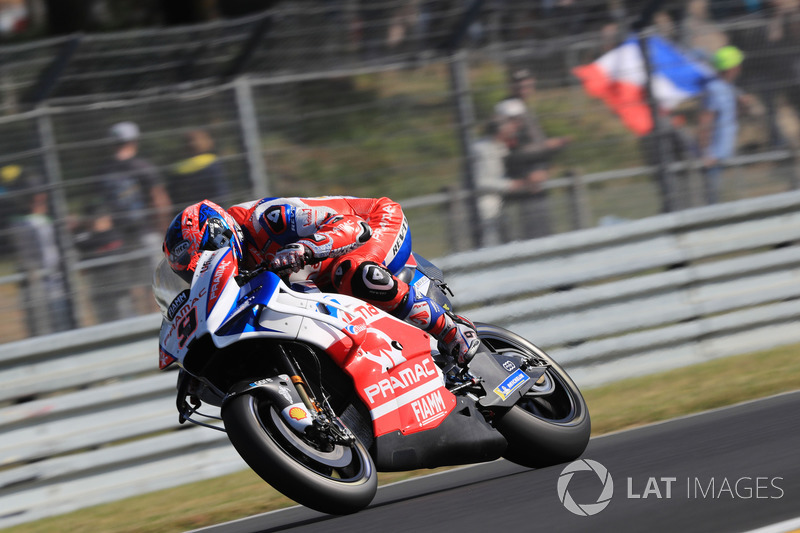 Andrea Dovizioso has been quick at Le Mans from the get-go, but hasn’t been able to progress as much as some of his rivals.

The Italian will almost certainly be in podium contention, and just one or two tenths separate him from being a proper victory contender.

Yet at the moment it is not Dovizioso who is looking like the strongest Ducati, but Danilo Petrucci.

Pramac rider Petrucci impressed by taking third in qualifying, but was also very promising on race pace, and especially on used tyres he appears to have a small but clear edge over Dovizioso.

It's the first time since Qatar that Petrucci is looking on par with Dovizioso, and while that race was a bit of a disappointment for the former, Le Mans offers another chance of a first podium of the season.

Jorge Lorenzo meanwhile hasn't looked as good as the other two GP18 riders, and his only chance of fighting at the front could come from a strong start from sixth on the grid.

Suzuki hasn’t looked as strong as in previous races, and its run of three consecutive podium finishes could come to an end at Le Mans, but Andrea Iannone is still well-placed a top-five finish.

It certainly won’t be easy for Zarco. But, with an edge over the factory Yamahas, more consistency over Marquez and just a bit of a pace advantage over the Ducatis, his chances are certainly healthy.