Even the most ardent Valentino Rossi fans couldn’t have predicted their man taking victory in quite such straightforward style at Jerez, so how did he blow away the opposition so convincingly? Jamie Klein investigates. 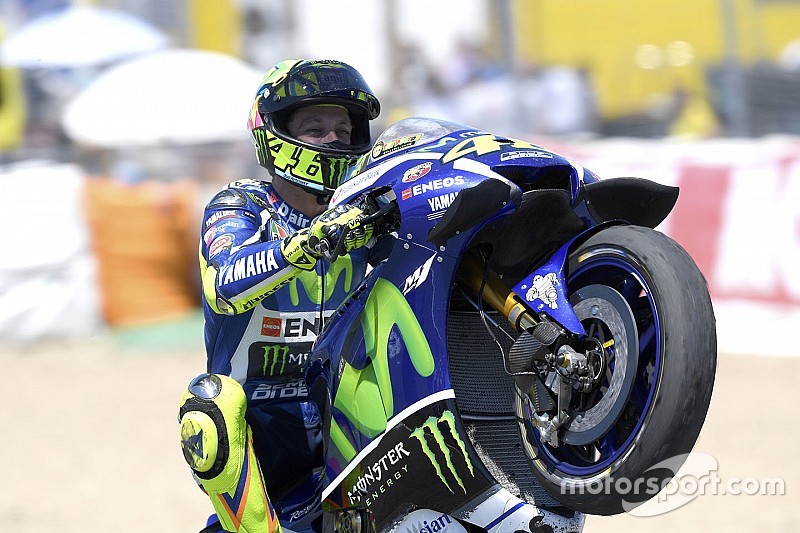 Seven years on from his last win at the home of the Spanish motorcycling, coincidentally the last year he won the MotoGP title, Rossi put on what can only be described as a masterclass to grab his first win of the season and put his two biggest rivals, Jorge Lorenzo and Marc Marquez, firmly in the shade on their home turf.

It completed a “perfect weekend” akin to those the nine-time champion, now 37 years of age, treated his fans to week in, week out during his early-to-mid 2000s heyday.

While it may have been his 87th premier class win, and his 113th since the dawn of his Grand Prix racing career in 1996, this was no ordinary triumph by ‘The Doctor’. Never before, for example, had Rossi started from pole and led every lap in the top class until Sunday, hard as that may be to believe.

The secret to his success? It seems the answer is that it’s all in the wrist – or, more specifically, how Rossi mastered controlling the throttle on a day that the sport’s new-for-2016 unified electronic software was found woefully lacking for the vast majority of riders.

Ahead of the new season, riders were describing the new control ECU as a “step back in time” compared with what they had been used to.

So perhaps it should be no surprise that the oldest and most experienced rider in the field (and the only one whose career predates the proliferation of the modern gizmos the younger generation have come to rely upon) handled the unique challenge posed by the hot, slippery Jerez track surface and the stiffer construction rear tyre introduced by Michelin better than anyone.

His textbook throttle control meant that Rossi was able to prevent the rear tyre from ‘spinning up’, i.e. rotating without gaining traction, a problem reported by a long list of riders up and down the field, Lorenzo included.

“We could see a difference in riding styles on Sunday,” Lorenzo’s long-serving crew chief Ramon Forcada told Motorsport.com. “It’s possible that this comes from the times when Valentino raced without electronics.

“In fact, when Jorge arrived at Yamaha [in 2008], we were surprised by how he could handle the throttle lever, especially when the tyre was worn out.

And so, while his rivals were stuck in rear tyre hell, Rossi, having repelled his teammate’s second lap attack, was able to pull away to the tune of two tenths per lap on average in the first half of the race.

“In Valentino's favour, he could use the little grip he had available by managing the throttle,” Forcada added.

“Everybody was sliding a lot, even on the main straight in fifth gear. When this happens, the current electronics are not good enough to correct it.

“Because the spinning doesn't stop, the rider has to help it by controlling the throttle. With the older electronics the margin [for error] was bigger.”

A different kind of race

By the halfway stage, Rossi had a comfortable lead of 2.8 seconds – but more importantly, with a rear tyre that was still in reasonable shape, certainly compared to those of his competitors.

From thereon, it was simply a case of protecting his advantage, and while Lorenzo did close the gap to as little as two seconds at one stage, his tyre was in no shape to be leant upon in the closing stages.

In this sense, as Lorenzo’s team manager Wilco Zeelenberg points out, the Jerez race was the opposite to most, in the sense that it was how the rider looked after the tyre in the early stages – not the latter stages – that ultimately determined the outcome.

“Everybody was saying the second half of the race would make the difference, but what actually happened was that the first 14 laps decided the race,” Zeelenberg told Motorsport.com.

“Valentino managed to have those three seconds, and from there, the tyres were gone and it was all about surviving and making it to the end.

“We didn't see Valentino suffer at all, or on the limit. That three-second gap helped him manage the race and think on the bike.”

Although Rossi had looked competitive all weekend, it wasn’t really until Sunday that the sheer magnitude of his advantage became apparent, and it was no co-incidence his best form coincided with a marked rise in temperature, which was reported at 40°C during the race.

This was up from 29°C during qualifying – and such a big rise in temperature played straight into Rossi’s hands, as the stress placed on the rear tyre became that much more severe, making his deft touch on the throttle more of an advantage.

“The grip was much worse [on Sunday], so the bikes were handling in a completely different way to what was expected after practice,” Zeelenberg added.

“In such difficult circumstances, each rider has his own solutions, and it's obvious that Valentino has a lot of experience.”

Bearing all of that in mind, perhaps the Rossi fans shouldn’t get too excited about such a virtuoso performance becoming a regular occurrence.

Lorenzo and Marquez will bounce back from their defeat, and that perfect storm of high race-day temperatures, a low-grip track surface like Jerez and the recent introduction of a much stiffer rear tyre is highly unlikely to repeat itself.

But, Sunday served as a reminder that, when the opportunity presents itself, Rossi is still capable of executing the perfect race, 20 years on from that first Grand Prix victory.

Crutchlow admits he "should have risked more" at Jerez