Analysis: How Mugello proved to Vinales Yamaha was the right choice 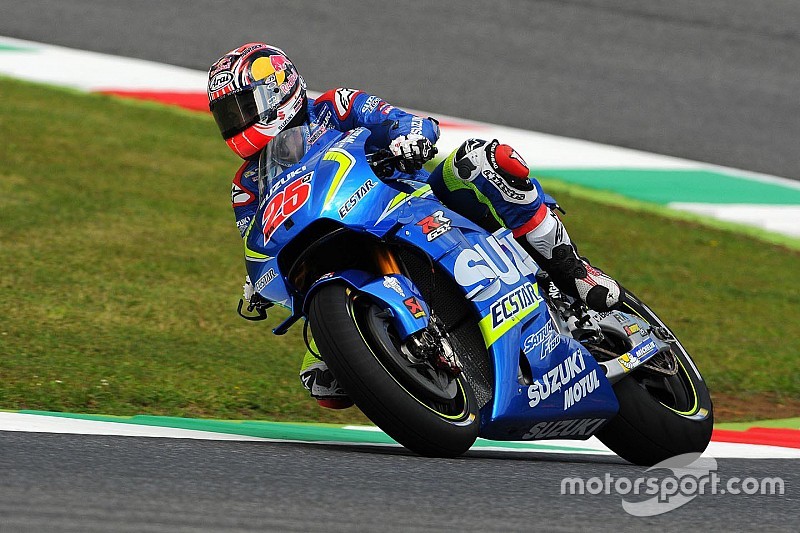 Yamaha-bound rider Maverick Vinales is certain he's made the right choice to commit to a change of teams for 2017, instead of sticking with his current squad Suzuki.

The Spaniard, who at Mugello suffered an electrical problem that ruled him out of the fight for the leading positions, believes that Suzuki is still a step behind the other Japanese manufacturers.

The Spanish rider equalled his best qualifying performance on Saturday, but on the following day, when he changed to third gear as the lights went off, the engine of his GSX-RR suddenly stopped pushing.

As he explained later, the pitlane speed limiter kicked in and, in the first 500 meters, all his options of a podium finish were gone, two weeks after he secured one at Le Mans.

He arrived 12th at the first corner and, little by little, being aggressive, he started passing rivals until he reached sixth place (lap nine), which would be where he'd finish. Despite the incident, he crossed the finish line 8.6 seconds behind the winner (Jorge Lorenzo), his smallest margin to first place so far this year.

The Catalan has spent the last few months considering what to do about his future: whether to stay with the Hamamatsu squad, a team that bet on him blindly in its return to MotoGP, or sign with Yamaha as Lorenzo's replacement.

The temptation of having the best bike on the grid won over everything, and the Japanese squad announced his arrival a week ago.

You could think that the two engine failures Yamaha had last Sunday could have brought some doubts for Vinales, but what happened at Mugello has left him even more convinced that he has made the right decision. The Spaniard feels that the M1's failures came as a result of the circumstances and not because of problems with the engines.

The Italian Grand Prix is a clear reflection of the moment Suzuki is going through: it has a bike with great potential, but that when it comes to crunch time, it's not as good as the Honda or the Yamaha.

The performance of the GSX-RR during pre-season was remarkable, especially in Vinales' hands, to the point where a lot of people saw it as a clear threat for podium finishes. However, the Japanese team is still lacking consistency and it has managed to finish on the podium just once, in France.

"We have to work hard and try to avoid those errors," said Vinales at Mugello. "In 15 days we are going to Montmelo and the bike works well there, but we can't fail like this again, not at the start or anywhere else."

"It's obvious that, on Sunday, Yamaha and Honda are a step ahead of the rest. Suzuki is not bad in the races, but it is still not at the point where it can win," a member of the rider's team added..

"Ducati is a bit ahead, but it also struggles for the race reason. Look at how well Petrucci, Redding or even Pirro do in qualifying, and then look at what happens in the races."

With Vinales confirmed at Yamaha for 2017, Suzuki is not slowing down in its desire to improve the bike's consistency, and so it travelled to Valencia to carry out a two-day test. There, the team worked two different chassis and with the electronics, with the goal of improving the traction of the package.

"The GSX-RR is good in some specific areas, like rideability and its handling on fast corners, but it's still lacking in other areas," said Vinales.

And that is a perfect explanation of why he opted to join Yamaha, which will give him a bike to fight with the best right from the start.