Analysis: Honda set for Jerez win, but which one? 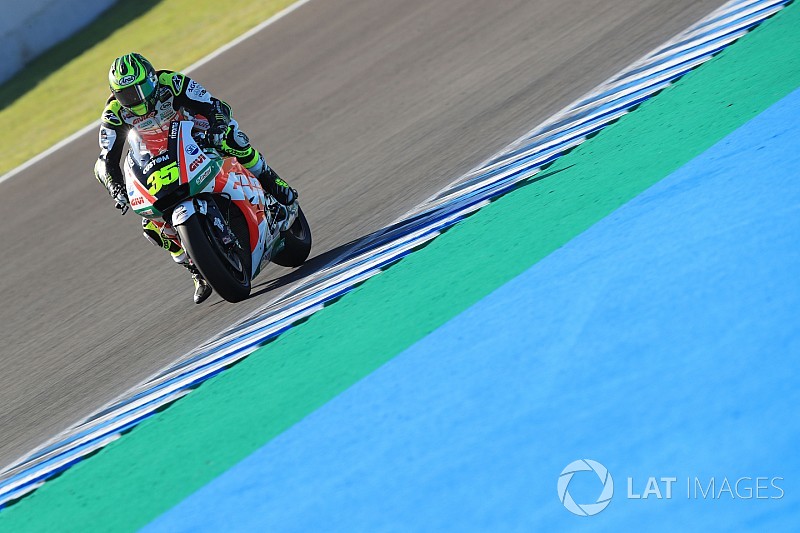 Honda looks primed for its third consecutive MotoGP victory at Jerez, but who is best placed to deliver it? David Gruz analyses the field ahead of the Spanish Grand Prix.

Already before the start of Sunday's Spanish GP, Honda has every reason to leave Jerez happy.

The team arrived to the track to find out if a solid pre-season and three successful overseas races rightly indicated that the 2018 Honda bike is competitive.

And, the way the Jerez weekend has panned out so far, Honda can not only be relieved it has no serious problems, but also confident it has the clear number one bike on the grid.

Already after Friday practice, riders from rival manufacturers acknowledged Honda is the strongest this weekend, and on Saturday little changed.

LCR's Cal Crutchlow emerged victorious in qualifying but for Sunday that means very little, especially with works stablemate Dani Pedrosa starting right next to him.

Should Pedrosa not continue to struggle with his injuries sustained in Argentina, the veteran would be considered as the favourite.

Jerez is one of the tracks where Pedrosa always retained an edge over teammate Marc Marquez, and has yet to finish lower than fourth over 12 years.

Pedrosa was the hero of Austin last time out as he took a respectable seventh despite riding under immense pain. Two weeks later, he admits he is still not riding at 100 percent.

The race distance was shortened by two laps from last year but at the physical Jerez track it will still be tough for him to keep up with fellow Honda riders. Yet, Marquez considers him the favourite.

That claim is probably at least partly influenced by respect towards his past accomplishments at Jerez, but Pedrosa doesn't appear to have an edge over Marquez or Crutchlow in race pace. 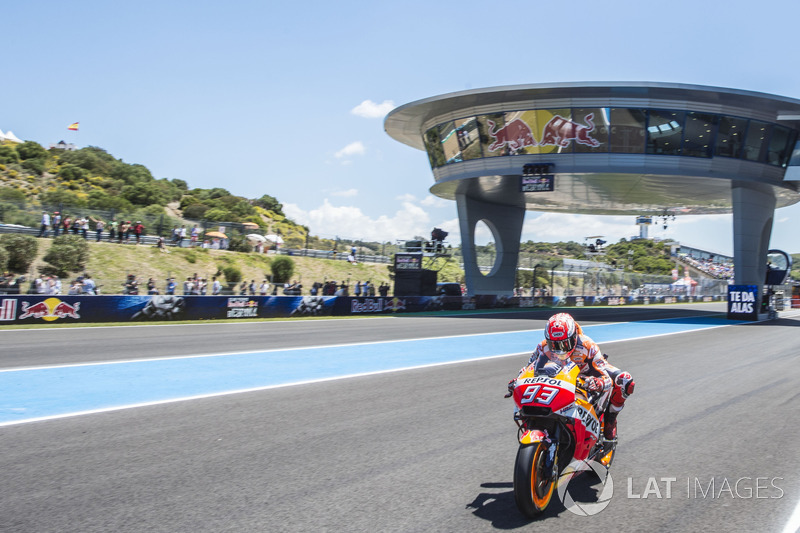 Mainly focusing on medium rears, all three leading Honda riders first put on hard rears in FP4, and there wasn't much to split them. Their best laps were all narrowly below the 1m39s barrier, and they consistently stayed around that laptime.

Honda's pace is similar on both medium and hard tyres, and the trio is once again very close – the only outliers being Marquez going a bit faster on fresh tyres, and Pedrosa lagging behind when they are really used.

That, and the expected fatigue due to his injury could put Pedrosa out of victory contention, should he spend the first half of the race in the leading group.

Apart from his qualifying heroics, Crutchlow has another thing going for him.

The Briton has been superior in the final sector leading up to the main straight - he was a tenth better than everyone else in qualifying, and beat Marquez and Pedrosa by 0.2s.

If Marquez from fifth on the grid can't immediately catch up with Crutchlow, and the Briton is able to use that final-sector advantage to build enough of a gap on the main straight, he could successfully defend most attacks and at the same time make himself the favourite for victory. 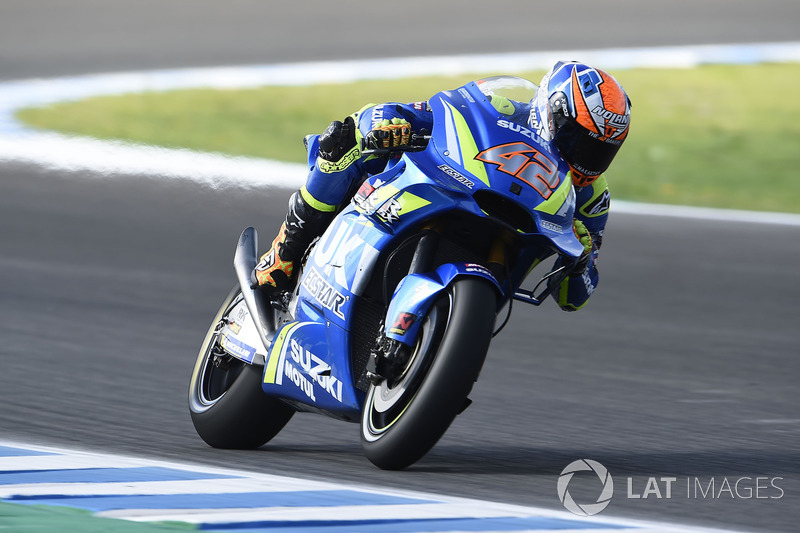 Somewhat surprisingly, Suzuki will likely present the biggest challenge for Honda from the outside.

The Hamamatsu-based squad has so far proved that Andrea Iannone’s strong Austin showing was no fluke, and this time it’s a double attack from Suzuki.

Alex Rins and Iannone qualified sixth and seventh, and their race pace is even better than that – their medium and hard tyre speed both are on level with that of the Honda men.

That said, in Austin Iannone looked most likely to match Marquez, but his pace faded as the race went on, and in the end he was beaten by the Yamaha of Maverick Vinales.

If Iannone and Rins are able to stay as competitive at Jerez as the Italian was in Austin, it remains to be seen whether the duo will once again drop back as the race nears its conclusion. 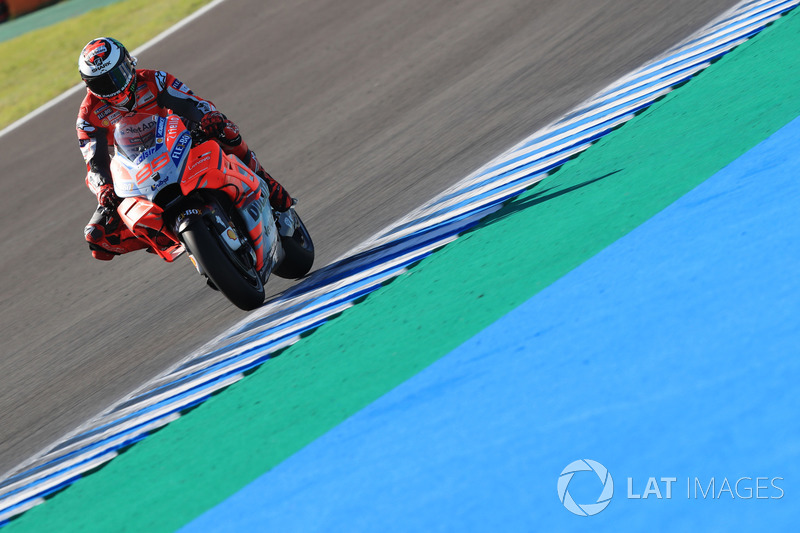 At the Ducati camp, Jorge Lorenzo is showing signs of life. The Spaniard looks to have upped his game again at the track where he claimed his first Ducati podium last year.

He was the only competitive Ducati in qualifying in fourth, and also the only one to set a laptime better than 1m39.0s on race pace.

However, the Spaniard falls under the same category as the Suzukis in as much as we don’t yet know whether Lorenzo has solved his tendency to drop back due to his chaotic start to the 2018 season.

If he has, he could be a wildcard for another podium finish. If not, he will likely end up behind Andrea Dovizioso, who might lack a bit in race pace, but could easily hunt down riders who push too much early on and don’t have enough tyres left toward the finish.

Danilo Petrucci has been confident this weekend, even said he was the strongest Ducati on Friday.

Yet he seems to be lacking speed, especially on used tyres, and he will more likely fight with the likes of Avintia's Tito Rabat, who looks to be the fastest GP17 this weekend. 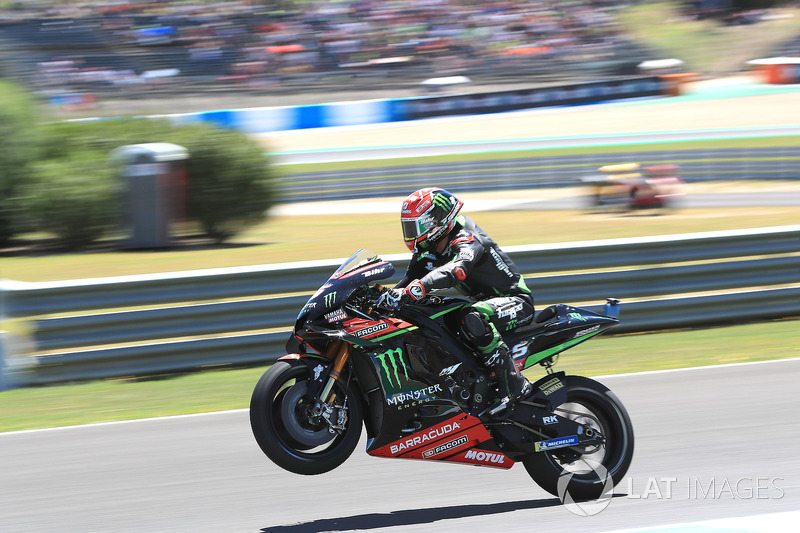 The Yamahas look beyond redemption at Jerez, as the first track that highlighted the weaknesses in the 2017 bike last year seems to be even tougher on the team this time around.

At a track where tyre spin is crucial, Yamaha just loses way too much in acceleration and at the same time chews up its tyres.

It at least looked half-decent in FP3 when Vinales even put in a 1m38.9s, but in the much warmer FP4 and qualifying, they were seriously off the pace, missing between 0.5s-1s per lap.

Although he had the same issues during Saturday, Johann Zarco might be Yamaha’s only hope for a solid result. The Frenchman pulled off a great qualifying lap and will start from the front row, while Vinales and Valentino Rossi are only 10th and 11th.

Zarco claimed he made a step forward during qualifying and, while the podium might be out of reach, a smart ride could result in a top-five finish.

Vinales and Rossi meanwhile, barring a major improvement overnight and during warm-up, could easily find themselves fighting with riders such as Petrucci, Rabat, Aleix Espargaro, Pol Espargaro or Mika Kallio, who could spring a surprise with the 2019 prototype KTM.