Espargaro "jealous" of brother due to KTM progress 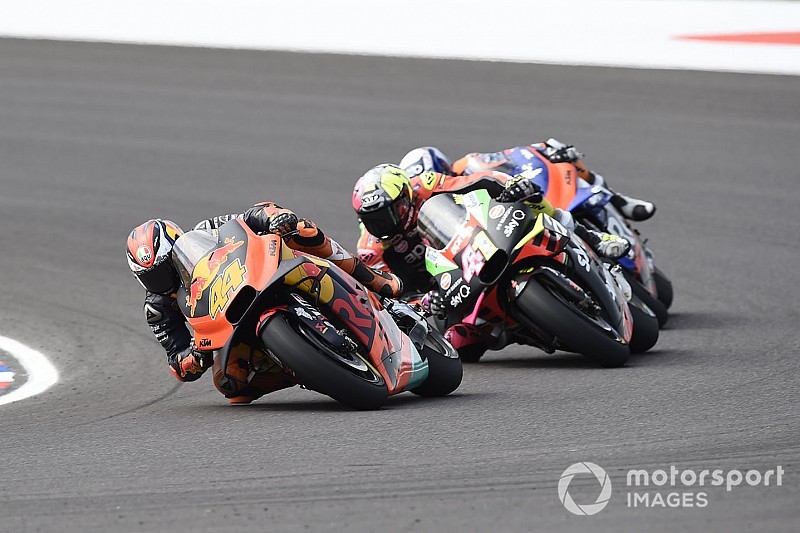 Aprilia MotoGP rider Aleix Espargaro admits he feels “jealous” of his brother Pol over the progress that KTM has made as of late.

The two Espargaro brothers have spearheaded their respective manufacturer teams since 2017, and Aleix feels KTM has recently overtaken his Aprilia outfit, as Pol scored the Austrian firm's best finish in the dry yet with sixth at Le Mans and has 38 points to his brother's 27.

When asked to compare his brother's situation with his, the elder Espargaro initially said he “doesn't know if 'jealous' is the right name”, before ultimately acquiescing: “We can say 'jealous', because I would like to feel this kind of development. But they deserve it.

“I feel unhappy on our side but happy for him because I know how hard he is working. But he has to be very proud, because it’s not easy to do the step they are doing.

“They are working very well, Pol told me after the Jerez test they found something with the new engine and they improved a lot.

“At the end of 2017, Aprilia was a lot stronger than KTM. Now KTM has overtaken us, they have for sure a more competitive bike. And Pol is doing a great job.”

The Aprilia rider acknowledged KTM had an edge in terms of budget, but also suggested it was the better-organised team.

He said he'd be “jealous the same but more angry” if it were not his brother spearheading KTM's recent gains.

“Just three months ago I was quicker in every single race; maybe on Saturday he was quicker but never in the race. Now it’s impossible for me to follow, they found a lot on acceleration.

“I’m a rider who likes to analyse the sessions, and if you watch Pol last year, was like [he was] riding a horse. This year, the way he accelerates reminds me a little bit of when he was at Yamaha Tech 3. They are doing a great job.”

After a disastrous 2018 campaign, the elder Espargaro started the current season much happier with the newest iteration of the RS-GP bike – but has since expressed his concern over a lack of mid-season progress.

Aprilia added a new team boss in Massimo Rivola in the off-season, and Espargaro says the ex-Ferrari Formula 1 man has been asking to be given more time.

“I have to say that I'm really happy with the arrival of Massimo, was something what we were really missing, he's doing a really great job, a super super job - but he's not a magician.

“Every time I ask him and I push him, the answer is the same. 'I need more time, please, I've just arrived. I know that it's difficult for you to still be positive because it's three years like this, but for me it's four-five months, so I need more time'. And I try to be positive and give more time to him.”