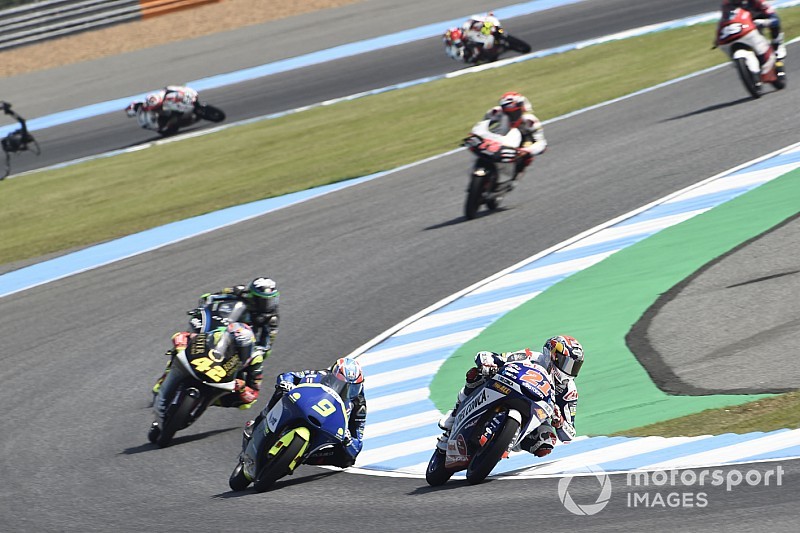 Fabio Di Giannantonio came out on top in a wild first ever grand prix motorcycle race in Thailand, while Marco Bezzecchi's Moto3 title hopes took a major hit when he was taken out at the last corner.

Gresini Honda rider Di Giannantonio, who recently secured a promotion to Moto2 for 2019 with the Speed Up team, overcame his rivals in a chaotic race around the Buriram Circuit.

He was one of four Italian riders who spent the 22-lap race exchanging the lead, often multiple times per lap, along with Bezzecchi, Lorenzo Dalla Porta and Dennis Foggia.

Having been shuffled towards the bottom of the top 10 in the middle of the race, Di Giannantonio fought his way back to retake the lead on lap 16, triggering a frantic three-way fight with Dalla Porta (Leopard) and Foggia (Sky VR46).

Di Giannantonio barged his way through to lead once more at the final corner with five laps to go, and after dropping places on the long run down to Turn 3 the next time round, Dalla Porta took over out front.

Bezzecchi was briefly bumped down to sixth on lap 20 but then managed to slingshot his way back into the lead at Turn 3 on the penultimate lap and led heading into the final tour.

Despite managing to avoid being slipstreamed into Turn 3, Bezzecchi was powerless to hold off Dalla Porta and Di Giannantonio in the following corners, with the latter seizing the advantage.

Bezzecchi looked well-set for third place, only to be hit by Dalla Porta's Leopard teammate Enea Bastianini at the final corner in an incident that wiped out both riders.

That elevated a fading Foggia to his first ever podium finish in Moto3, ahead of points leader Jorge Martin (Gresini), Gabriel Rodrigo (RBA) and Vicente Perez (Avintia).

Martin had only qualified 15th after struggling with pain in his left hand, but with the help of a modified Alpinestars glove he battled his way through the order to finish fourth and stretch his championship lead to 26 over Bezzecchi.

Di Giannantonio now finds himself only three points adrift of Bezzecchi in third.

Several riders crashed while running in the leading group, with Darryn Binder (Ajo) squandering a podium chance by coming to blows with Albert Arenas (Aspar) in the early laps.

Ayumu Sasaki (Petronas) was likewise well in the fight for the lead when he fell, while compatriot Kazuki Masaki (RBA) was a victim of light contact with Martin.

Erstwhile title contender Aron Canet withdrew from the Thailand race due to the after-effects of his first-corner crash at Misano last month. His stand-in at the Estrella Galicia squad, Jeremy Alcoba, was 18th.