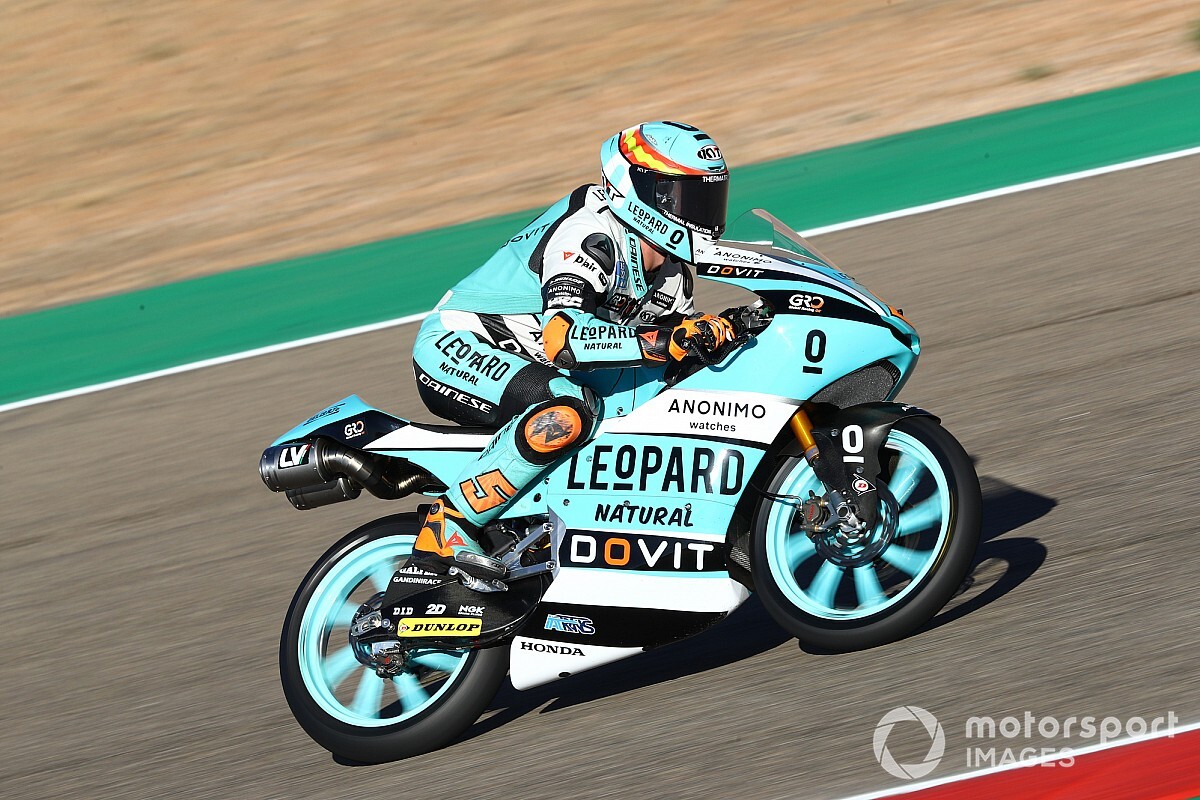 Tony Arbolino on his return from a COVID-19-related absence last weekend grabbed the holeshot from second on the grid, though poleman Raul Fernandez immediately retaliated at the first corner.

Arbolino got shoved back by the VR46 KTM of Celestino Vietti and championship leader Arenas through the next few turns, before the latter hit the front for the first time at the penultimate corner.

The lead group in the early laps was over 20 bikes, with the battle at the front frantic with the likes of Vietti, Fernandez and his Ajo KTM teammate Kaito Toba taking turns leading the field.

Arenas scythed past Toba at Turn 1 on lap 10 to retake the lead, and resisted several attempts by Masia over the new few tours.

The speed of Arenas’ Aspar-run KTM proved tough for Masia to overhaul on his Leopard Honda on the straight, while the former’s strength in braking made him almost impossible to overtake.

But Masia finally made a move stick into Turn 1 having nailed his run from the final corner on lap 17, though Arenas would be back ahead six turns later.

Masia got ahead of Arenas into Turn 1 at the start of the final lap, but once again Arenas struck back at Turn 7 and looked like he’d hold onto his lead as he got a brilliant exit onto the back straight.

But the Leopard rider blasted through into the penultimate corner, opening the door for Tech 3’s Ayumu Sasaki and Toba to come through on Arenas too.

Masia held on by 0.051 seconds on the run to the line to get himself back into championship contention, with Sasaki claiming his and Tech 3’s maiden Moto3 podium.

Toba hasn’t had a top six since last year’s French GP, with his best result a ninth in 2020.

But the KTM rider made it two Japanese riders on the podium in third, with Arenas fourth after being mugged through the final bends.

Vietti completed the top five ahead of Petronas Sprinta’s John McPhee, who came from 17th on the grid, with his sister Tech 3 KTM of Deniz Oncu, CIP's Darryn Binder, Honda Team Asia’s Ai Ogura and the Snipers Honda of Arbolino completing the top 10.

Despite missing the podium, Ogura’s ninth means Arenas’ championship lead has opened up to 19 over the Japanese rider with just three races to go.

Vietti is a further point adrift in third, while Masia is now 24 points behind in fourth.

Despite the raging dogfight throughout the race, only two riders failed to finish when Tatsuki Suzuki crashed exiting Turn 9 on the last lap in front of EG 0,0 Honda’s Sergio Garcia and left him with no choice but to hit the stricken SIC58 bike.