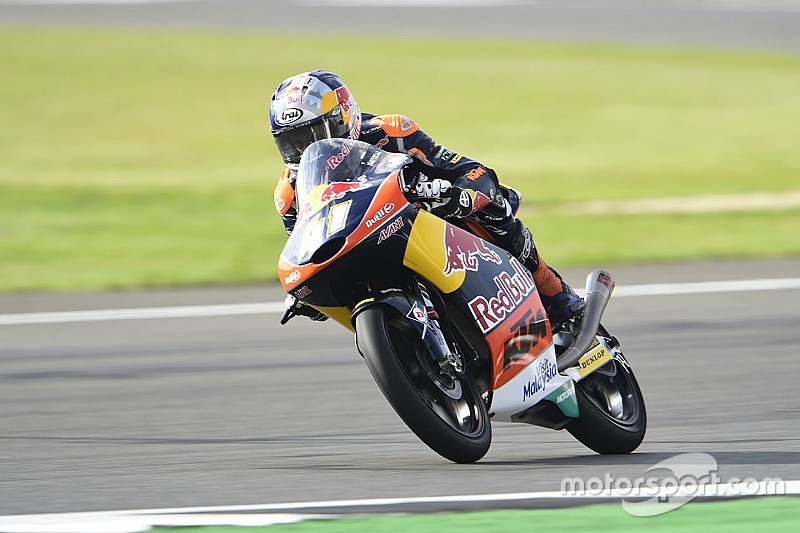 Brad Binder took his fourth Moto3 victory of the season at Silverstone, and extended his championship lead to 86 points as main rival Jorge Navarro crashed out.

Starting on the front row, Binder spent the whole race fighting within the leading group.

He was leading with two laps to go, but was demoted by Red Bull Ajo teammate Bo Bendsneyder, who started the final lap in the lead.

However, the South African slipstreamed his way past at Stowe and completed the final lap to win.

Pole-sitter and early race leader Francesco Bagnaia also passed Bendsneyder to take second, 0.183s behind Binder at the finsh - the Mahindra rider claiming his fifth podium finish of the season.

Bendsneyder, on the other hand, celebrated his first top three finish, just a tenth further back.

Wildcard Mahindra entrant Stefano Manzi had the standout race of his career in fourth, with 12th being his previous top result.

The 17-year-old Italian started from 34th, but worked his way up to be part of the leading group in the second part of the race.

Manzi's race wasn't without controversy however, as he was involved in a late-race incident with Navarro, as the duo touched when the Spaniard attempted to overtake him at Vale.

The contact resulted in Navarro falling, all but ending his title hopes, and collecting Andrea Migno.

Sky Racing Team's Niccolo Bulega took fifth ahead of fellow Italians Fabio Di Giannantonio, Niccolo Antonelli and Enea Bastianini, the latter settling for eighth despite fighting at the front in the beginning.