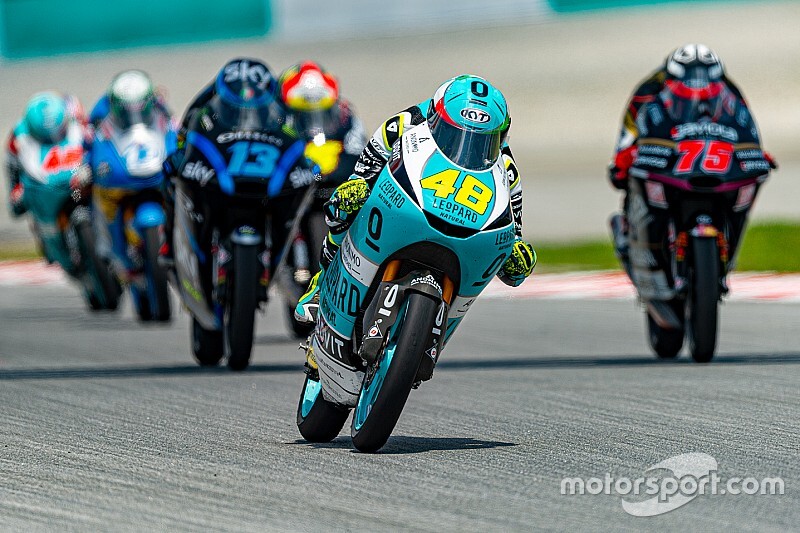 Newly-crowned Moto3 champion Lorenzo Dalla Porta claimed victory in the penultimate round of the 2019 Moto3 season at Sepang, as a highside for Gabriel Rodrigo wiped the early leaders out of the race.

Having retaken the lead at the start of Lap 6, Rodrigo was violently launched off his bike at the exit of Turn 4, with chief rival Tatsuki Suzuki (SIC58) and Alonso Lopez (Estrella Galicia 0,0) unable to avoid the Gresini rider and also retiring on the spot.

The incident initially left Celestino Vietti in the lead, before Leopard Racing’s Dalla Porta passed the VR46 rider later in the lap to snatch top spot.

However, Dalla Porta was never able to shake off Vietti and even briefly lost the lead with four laps to go after running wide at turn 14, before retaking the position at the final corner.

The two riders again battled on the final lap, Vietti surging past Dalla Porta at turn 2 before the latter regained the initiative at turn 9 in a move that sealed his third successive victory of the season.

Vietti, meanwhile, was tagged by Albert Arenas (Angel Nieto) at the exit of the same corner and dropped down to fifth, losing a podium in the process.

Arenas himself crashed out on his own at the final corner, elevating Sergio Garcia (Estrella Galicia 0,0) into second and a charging Jaume Masia (Mugen Race) onto the final podium spot.

Masia was forced to start at the back off the grid after his bike stopped on the outlap, but pulled off a stunning recovery ride to break into the Top 10 early on, before grabbing third on the final lap.

Ai Ogura finished fourth ahead of Vietti, with polesitter Marco Ramirez seventh after being forced to take evasive action for the early melee caused by Rodrigo.

John McPhee and Aron Canet were seventh and eighth respectively, while the top 10 was completely by Tony Arbolino and Niccolo Antonelli.