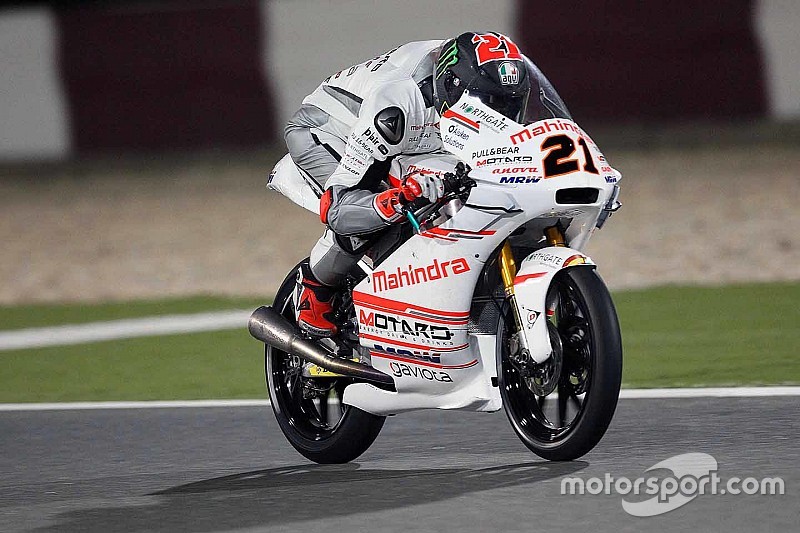 Aspar rider Francesco Bagnaia took a surprise podium in the Qatar Grand Prix for constructors' Mahindra in the 2016 season opener.

The Italian rider was involved in a big battle with eventual winner Niccolo Antonelli (Honda), second placed Brad Binder (KTM), making it an all three different manufacturers on the podium.

Fighting all through the 18-lap race, Bagnaia moved from second to sixth but took third on the last lap when fourth placed Romano Fenati (KTM) went wide on Turn 1.

The Aspar rider then held on to the position keeping Fenati at bay, finishing 0.148s off Antonelli, giving Mahindra's an unlikely podium.

This is the Indian marquee's fifth podium since entering into Moto3 in 2014 and Bagnaia's second with the manufacturer.

It wasn't a great finish for teammate Jorge Martin who was running 18th at Losail circuit but retired with one lap to go, leaving Platinum Bay's Darryn Binder, the second highest Mahindra at 23rd.

McPhee was followed by the rest of the Mahindra riders with Tatsuki Suzuki (CIP) at 26th, rookie Stefano Valtulini (Team Italia) 27th, the other Platinum Bay of Karel Hanika 30th.