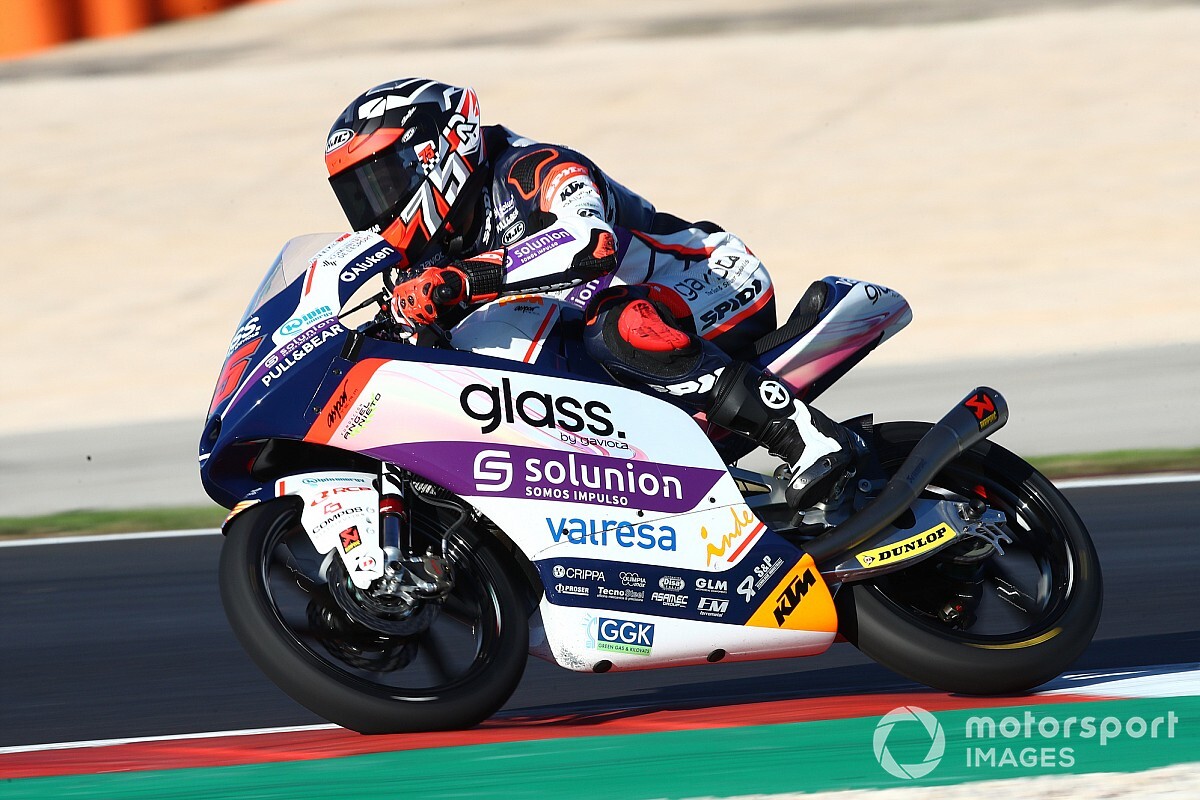 Arenas, Ogura and Arbolino came into the final round covered by 11 points, with Arenas prevailing by just four after crossing the line in 12th to seal the deal.

Arenas powered past Ogura into Turn 1 at the start of lap three, while Arbolino had worked his way up to 13th on his Snipers Honda having come from 27th on the grid.

Fernandez played no part in the battle behind as he continued to extend his lead opening up an advantage of well over nine second en route to a second win of the season.

The podium group behind Fernandez swelled as the race wore on, with Arenas and Ogura slipping from the top three down the order.

Arbolino’s charge would take him to seventh by lap 17 after a hard dice with Arenas at Turns 10 through to 12, with the Snipers rider taking position on the run to Turn 1 on the following tour using the power of his Honda.

Ogura and Arenas engaged on lap 18 over eighth spot, with the Honda Team Asia rider moving up the inside of Arenas at Turn 5 and forcing him off track at Turn 8 with a hard retaliation after the Aspar KTM man tried to take the position back.

Dropping to 10th, Arenas rallied over the next few laps to get back into seventh behind Arbolino, while Ogura dropped to ninth.

With Ogura and Arbolino too far away from the podium battle, Arenas simply needed to stay upright on the final lap to win the title.

But he came close to contact with VR46’s Celestino Vietti on at Turn 3 and had a rear-end moment exiting Turn 4 after running wide.

Despite the chaos, Arenas survived to cross the line in 12th behind SIC58’s Niccolo Antonelli to be crowned Moto3 world champion before stepping up to Moto2 next year.

Leopard’s Dennis Foggia took second in the race despite serving two long lap penalties, the Italian fending off Gresini’s Jeremy Alcoba - who took his first podium to cap off 2020 as rookie of the year - by 0.056 seconds.

Sergio Garcia was just under six tenths off the podium on his EG 0,0 Honda ahead of Arbolino, who could do nothing more than fifth having come from 27th to end up second in the standings equal on points with eighth-placed Ogura.

Between Arbolino and Ogura came Darryn Binder (CIP) and Vietti, while John McPhee on the Petronas Sprinta Honda and Tech 3’s Deniz Oncu rounded out the top 10.

There was a late crash for the second Leopard Honda for Jaume Masia, who had also worked his way into podium contention having served two long lap penalties, while Suzuki and Max Racing’s Alonso Lopez also tumbled out of the race.