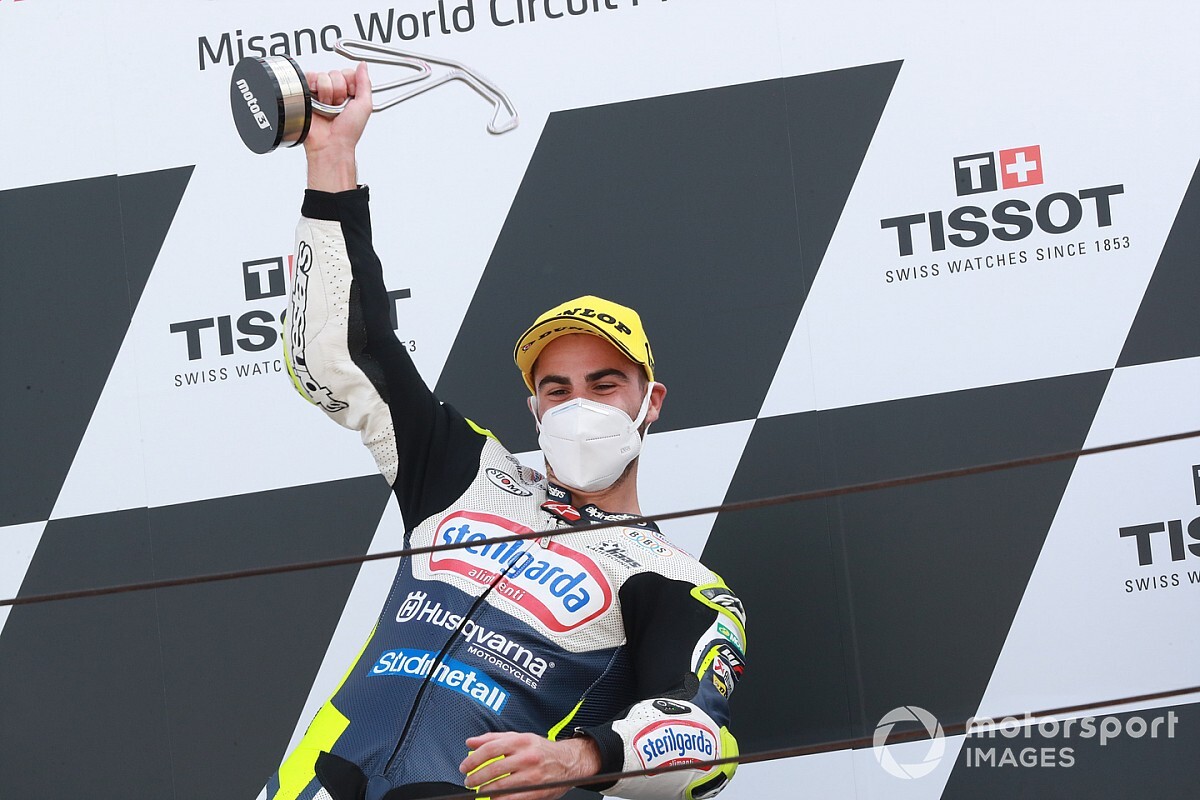 Romano Fenati snatched his first Moto3 win in a year in the Emilia Romagna Grand Prix at the scene of the controversial Moto2 incident which stalled his career in 2018.

Fenati was banned from grand prix racing and lost his Snipers Moto2 and MV Agusta ride for 2019 in the class when he grabbed Stefano Manzi’s brake lever at Misano two years ago.

Thrown a lifeline by Snipers to return to Moto3 last year, Fenati joined Max Biaggi’s squad for this season – though has largely struggled for form on the Husqvarna-badged KTM.

Tony Arbolino grabbed the holeshot from second the grid on his Snipers Honda, though poleman Raul Fernandez would demote him through Turn 5.

Albert Arenas carved around the outside of Arbolino at the fast Curvone right-hander for second, before grabbing the lead from Ajo KTM’s Fernandez at the same corner three tours later.

The Aspar rider’s stint in the lead would last until lap seven, when Celestino Vietti muscled his VR46 KTM ahead at Curvone.

Vietti defended his lead through to lap 17, when Jaume Masia on the Leopard Honda came through at the Quercia left-hander at Turn 8 – with the VR46 rider lucky to stay mounted when Gresini’s Gabriel Rodrigo clattered into the rear of his KTM.

He quickly regrouped from this, however, with both Vietti and Arenas scything past Masia at Curvone.

Masia moved back into the lead at Turn 2 on the penultimate lap, though a dive from Arenas into Turn 4 broke up the opening pack and allowed Vietti to sneak back through into first

Arenas made a move on the lead stick at the Tramonto right-hander at Turn 10, but was carved up through Curvone as Masia launched a daring raid to jump from third to first – with Fenati seizing the opportunity to jump into third.

Vietti immediately tried to retaliate at the Carro hairpin at Turn 14, but got crossed up on the way in and forced Masia wide, with Fenati grabbing the lead as a result.

Fenati kept it clean through the final corner to fend off Vietti by 0.036 seconds to score his first win since last year’s Austrian round and the 12th of his career, making him the most successful Moto3 rider in terms of victories.

Vietti held second from Honda Team Asia’s Ai Ogura, who came from 12th on the grid, with Arenas shoved back to fourth amid the chaos of the final lap – his championship lead cut to just two points over the Japanese rider.

McPhee was involved the podium battle having started 20th, but was punted wide by Gresini’s Jeremy Alcoba at Turn 4 on the penultimate lap and lost touch. He holds third in the standings, but is now 21 points behind Arenas.

Darryn Binder once again crashed out of the podium battle, when he was flicked from his CIP machine at the first corner on lap 19.