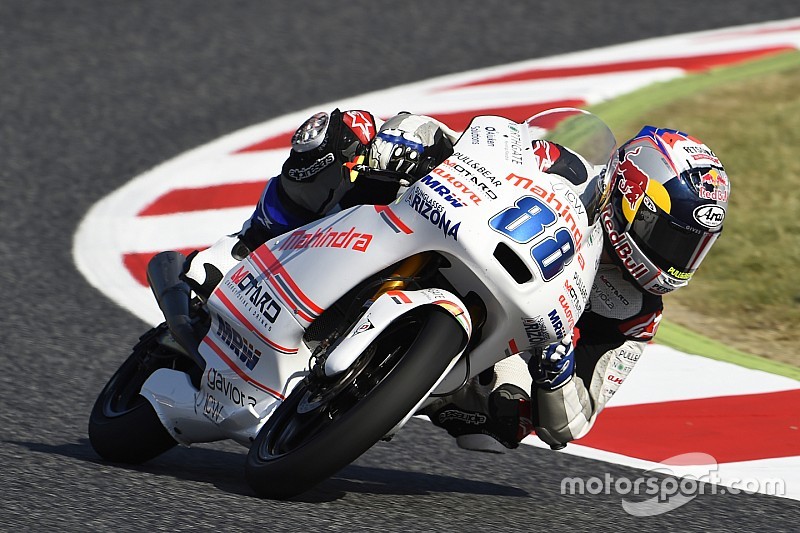 Aspar Mahindra's Jorge Martin has injured his right hand after a heavy crash in the Barcelona Moto3 race on Sunday.

The Spanish rider was running 14th having started 22nd when he suffered a fall at Turn 2 with six laps remaining, which ended his race.

Martin was taken to the circuit's medical center as a precaution and was spotted with a heavy bandage on his right hand.

"I'll undergo a CAT scan to confirm the extent of the injuries, but it seems that I have broken a metacarpal bone and maybe my scaphoid," said the Spaniard after the race.

The team later revealed on Twitter that Martin has 'fractured his fourth and fifth metacarpal and that he will be operated on Tuesday by Dr. Xavier Mir at Dexeus.'

Wildcard entrant Albert Arenas who had a crash two laps before Martin had his left hand bandaged but it is believed to be minor bruises at this stage.

Teammate Francesco Bagnaia too crashed out after Juan Francisco Guevara hit him at Turn 10, the Italian retired immediately, while the KTM rider continued on to finish 21st.

Binder registered his first championship points en route his best Moto3 finish of 12th position after having started way back in 30th, ending his four consecutive DNF run in style.

"I’m definitely happy with the result – getting into the points has been a long time coming," an elated Darryn added, younger brother of championship leader Brad.

"I probably could have done a bit better, but unfortunately the group broke up and a few riders skipped the chicane which made the gap bigger, so I lost the slipstream."

Points for Suzuki and McPhee

CIP's Fabio Spiranelli and Team Italia's Lorenzo Petrarco were the only other finishers for Mahindra-powered bikes at 21st and 22nd respectively.

Binder's teammate Karel Hanika came close to score his first points of 2016, but for a crash with a lap to go.

Joining the Czech and the Aspar riders in the retirement list were Team Italia's Stefano Valtulini and Peugeot's Aleix Masbou - both coming together on the opening lap of the race.