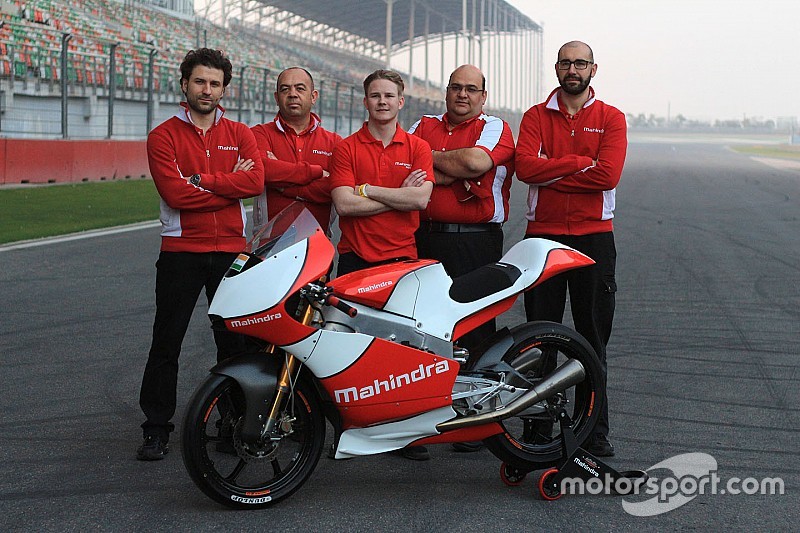 Mahindra’s Moto3 chief Mufaddal Choonia says the Indian manufacturer’s aim is to start winning races in 2016, as it sets to bridge the gap to rivals Honda and KTM.

After a difficult 2015 season, Mahindra has completely revamped its Moto3 bike, with a new engine and aerodynamic package expected to turn its fortunes.

With the outfit’s factory also receiving new equipment, an upbeat Choonia sees no reason why Mahindra won’t leap into an upward trajectory this year, as he reveals to Motorsport.com in an exclusive interview.

How would you rate the 2015 season? Do you feel there were some missed opportunities?

“Honestly, the results of the season - the way they went and what you finally see on the timesheets - aren’t really the true reflection of our performance or our capabilities. I believe we were terribly unlucky in 2015. There were races we were fighting for victories and we had crashes and things like that.”

“Barring a few races where we were really not as per expectations, overall, the season was quite positive for us.”

What all changes have been made to the MGP30?

“It’s virtually a new bike and it’s been created in a record four months. Lots of things have changed on the bike. It’s got a new powertrain, a highly modified chassis, a completely new aerodynamic package.

"Lots of work has been done on electronics. We’ve done a lot of upgrades to intake and exhaust system - now you see a double exhaust as compared to the single exhaust we had till last year. We’ve made huge changes. Virtually 80% of the bike is new. And that 80% constitutes the technical composition.”

How can you catch the other manufacturers in Moto3, namely KTM and Honda?

“We all have to put our heads down and work. In racing, development never stops so you have to keep trying hard throughout the season to keep fighting at the front. It’s a combination of a lot of factors: the machine is one, the team and the riders are the other two - it’s a mixture of all three. We hope we’ll be strong in all three.”

How satisfied are you with your partnership with Aspar Racing?

“It’s been a very good partnership. The first year in any new partnership it’s takes a bit of time to know each other. We’ve kind of crossed that bridge. Now there’s an excellent understanding between both sides.“

“And clearly Aspar Racing is playing the role of a pure factory team for us - and they are playing that role very well. They brings lots of experience into the programme. Team management and rider management is something Jorge Martinez [former MotoGP rider and Aspar Racing's founder] knows like the back of his hand, him being a four-time world champion [three-time 80cc and one-time 125cc]. They are adding a lot of value to the programme - both Jorge personally as well as his entire setup.”

What are your long term plans with Aspar Racing?

“They are our factory team and we would like to keep the partnership going. It has to be successful for both sides. At the moment, we are taking every season as it comes. There’s clearly an intent to work with them on a long-term basis because in racing it doesn’t make sense to change partners frequently. We want to work with them on a long-term basis. And I’m sure they want to work with us as well. That’s the arrangement we have and the understanding we have so far. So we’ll see how it shapes up.”

Is the Peugeot-branded bike the same as Mahindra one?

“Yes, it is the same one. Peugeot is using it more as a marketing tool simply because MotoGP presents them a great platform to take their brand around the world. MotoGP happens in so many markets where Peugeot is present. So, for them it is a pure business call. It is a business marketing call than a branding call in that sense.”

“For them, it is a very important initiative because they are present in the markets where MotoGP races are held. So, we are looking forward to having them with us. It’s always exciting to have two brands. It shows how important Mahindra Racing is to our Group and the business side of racing, in that sense.”

Had Mahindra not forayed into Formula E, would it still have its own team in Moto3?

“I don’t really see any connect between the Formula E and the reason we are not running our team in MotoGP. I have explained this earlier the reason why we decided to go in for a in a way to an outsourced model for running our factory team simply because there are people over there who run teams much better than the manufacturers.

"And clearly we didn’t want to compromise on that bit at all because It takes a lot of effort to run a team. And I’m not talking about the financial effort at all. I’m purely talking in terms of the human effort and the technical effort that is required to run a team.

“As a manufacturer, we want to concentrate all our efforts on developing a package that is a winning package. And there are people out there who can run racing teams in a much better way than a manufacturer. It’s a win-win for both sides. That’s clearly the reason why we decided to go this route. There’s absolutely no connection between MotoGP and Formula E.”

How much operational autonomy does the race team get?

“There are certain aspects of running a team. So, in terms of all the technical aspects of running a team, if I may so, the technical package, which means the bike itself, the parts itself, the setup of the bike, the kind of  engine maps to be used during a particular weekend, homologation of the engine maps - all of it is managed by Mahindra because that’s what a manufacturer is supposed to do and that’s the support we give to do the factory team.”

“Aspar does the actual running of the bike. Aspar does all the management of the riders because we must understand that the riders are a very critical part of a MotoGP programme. It’s important that during a race weekend and otherwise a rider is groomed the way riders riders should be groomed. And who better than an ex-world champion to do that. And that’s a skill set which Mahindra can never get as none of us have never been riders in the past.

"So, I can never give that support to a Francesco Bagnaia about how he should be preparing for a race psychologically, for example, because I’m not a rider. But that’s the expertise our partners get because they have been riders, and not just [ordinary] riders, but very successful riders.

What kind of facilities do you have in the factory and what all upgrades are planned for the future?

“We have or we will have in a very short term everything that a full-scale racing constructor should have. It’s a full-scale R&D center. We are just about installing some very critical equipment which should be ready in five-six months. We have a very strong vendor and part development programme which is very critical again for racing. Not just for quality of parts but also working with vendors who understand racing very well.

"We have a very strong team that works with vendors for parts and development of components. Of course, we have a strong R&D setup as well. And we also have a workshop where bikes are assembled. So it’s a complete 360 degree facility.”

How long will it take to be fully functional?

“We are making upgrades to it almost every year because they are new things that we believe should be added. At the moment, you’ve seen the new bike that we’ve unveiled today. It is a bike that has been designed and manufactured there so it has the capability even today to make a very competitive Moto3 machine.”

“There are certain additional things we are adding, more on the engine side. At the moment, we are relocating our engine facility and spinning it off into a completely separate facility very close to our existing one. We believe engine development needs a special focus along with special equipment, like test beds and all that. That should be ready in next 6-8 months.”

Last year there were complaints that the Mahindra bike struggled in terms of acceleration. Has this been fixed for this year?

What are you expectations heading into 2016?

“If you ask any constructor about the expectations, they would say it’s to win the championship at the end of the season. But let’s be candid about it. We want to be quite realistic as far as our expectations are concerned."

"While championship is clearly in the back of our mind, I believe our immediate next step is to start winning races. We haven’t won a race so far. We’ve been on the podium many times, but we really haven’t won a race. So, our first immediate goal is to win a race.”