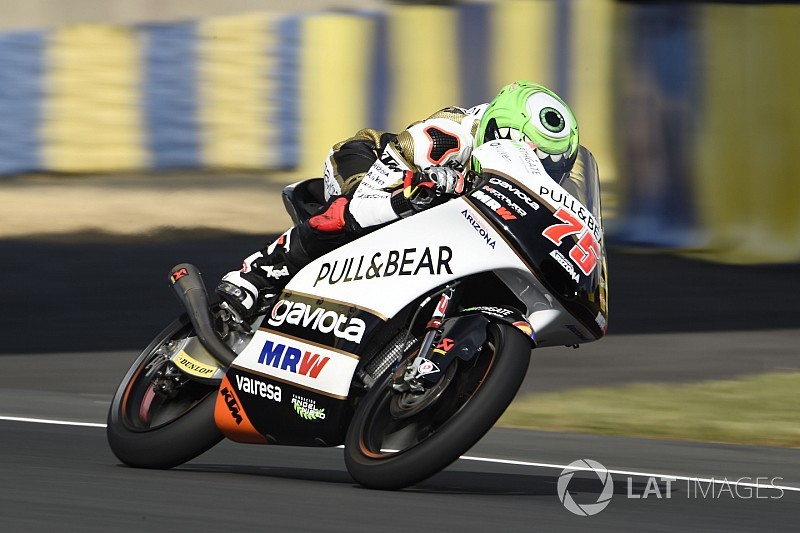 Albert Arenas took his maiden victory in Moto3 at Le Mans in dramatic fashion after Marco Bezzecchi and Jorge Martin crashed at the last corner and Fabio Di Giannantonio was given a post-race penalty.

Bezzecchi and Martin were fighting for the lead for the majority of the race, and started the last lap with the Italian rider leading.

Martin was unable to pass Bezzecchi on the back straight and instead dropped out of the top two for the first time in the race when his Gresini teammate Di Giannantonio passed him.

He then also passed Bezzecchi to lead the race at the penultimate corner, and moments later Bezzecchi had a big highside crash and collected Martin as well.

Di Giannantonio crossed the finish line first, only to lose his maiden victory due to a three-second penalty for having cut Turn 9 with six laps to go.

That promoted Arenas into first place, the Spaniard celebrating his maiden Moto3 victory.

Niccolo Antonelli had crossed the line fourth, and would have moved up to third - but he was also given a penalty to the tune of 1.8s and was classified fifth behind Di Giannantonio.

Bezzecchi's Prustel GP teammate, Jakub Kornfeil was also given a time penalty, and ended up sixth.

Kornfeil miraculously survived an incident with the crashing Enea Bastianini on the penultimate lap, as Bastianini fell at the final corner and Kornfeil ran over his bike, launched into the air, landed in the gravel and managed to stay upright.

Tony Arbolino (Snipers) was seventh ahead of Aron Canet, who started from last as a penalty for causing a crash last time out at Jerez but quickly recovered to 11th.

Tatsuki Suzuki and Jaume Masia completed the top 10, while the other riders to crash out were Gabriel Rodrigo, Nakarin Atiratphuvapat and Nicolo Bulega.