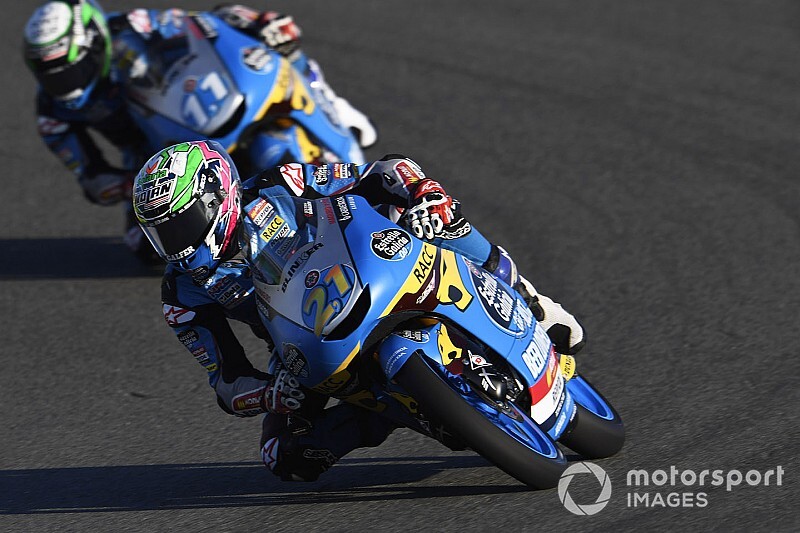 EG0,0 rider Sergio Garcia took his maiden Moto3 victory in a chaotic season finale in Valencia, which was both delayed and red-flagged, as debutant Xavier Artigas starred.

Before the race even started there were already two crashes when Aron Canet's bike started to leak oil on the circuit, causing him and Ayumu Sasaki to fall at Turn 6 on the sighting lap.

The start was delayed by 11 minutes and Jaume Masia high-sided out of second place at Turn 4 when the race finally kicked off, gifting Marcos Ramirez a healthy lead already on the opening lap.

But the red flag came out just two laps into the race as a result of a mass crash.

It was initiated by Carlos Tatay crashing at Turn 11 - the reigning Red Bull Rookies Cup champion was hit by Jeremy Alcoba and Niccolo Antonelli, but Dennis Foggia was the most unlucky victim of the crash as he, along with Makar Yurchenko, hit Tatay's bike.

All riders were conscious, but the doctors tended to Foggia for a long period before the Italian was taken to the medical centre.

With less than three laps completed, the race was restarted with the original grid order, allowing Andrea Migno a second chance to make up for a poor initial start.

Migno had a better getaway for the second time but Ramirez was back ahead by Turn 2, and the Spaniard led in the early stages.

Rookie Sergio Garcia passed Ramirez six laps into the second race but Xavier Artigas stole the show, the debutant carving his way through the field and soon joining the lead group.

Artigas, riding for Leopard, was in the lead by lap nine and showed blistering pace, also helped by Migno and Garcia battling for second place behind him.

Artigas led until the penultimate lap when he made a mistake at Turn 1 and Migno and Garcia moved into first and second.

Garcia went for overtakes on Migno at both T2 and T4 but Migno responded instantly and the Italian led until the last lap when Garcia finally made a move stick into the long left-hander.

Migno tried to slipstream his way back into the lead out of the last turn and in the end missed the victory by five-thousandths of a second.

Garcia celebrated his maiden victory in Moto3, while Artigas took the final podium spot, having passed Suzuki at the final turn.

Filip Salac (Pruestl) was fifth with Canet taking sixth as Ramirez dropped back to seventh.

UPDATE: Foggia was hospitalised after suffering a concussion in his crash while Masia dislocated his left shoulder. Both riders were declared unfit.