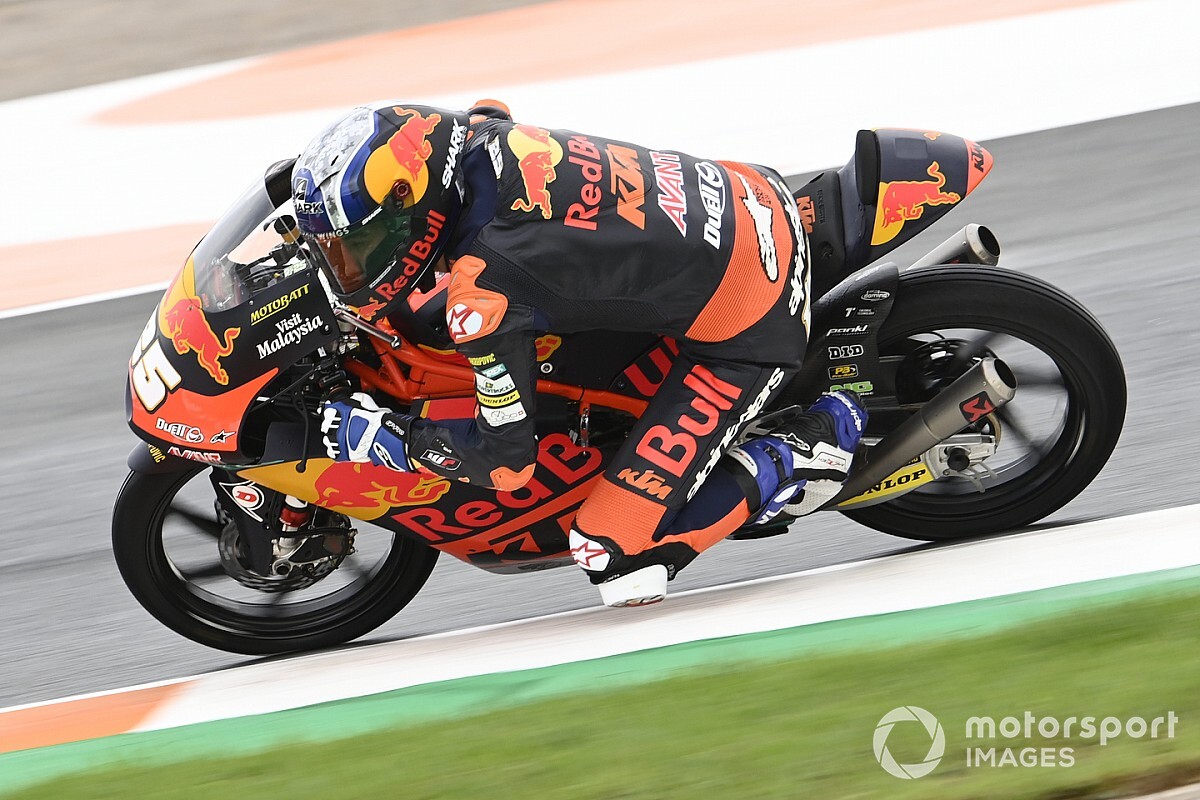 Celestino Vietti got the holeshot from third on the grid, while Arenas and Alonso Lopez made contact off the line on the charge down to Turn 1.

Lopez would take the lead at the start of the second tour, with Fernandez coming through at the second corner.

Vietti retaliated through Turn 4, with Fernandez holding firm as the VR46 rider highsided out of the corner.

This forced Arenas to check up, leaving Lopez with nowhere to go but straight into the back of the Aspar rider and damaging his KTM.

The chaos allowed Fernandez to escape to a lead of over two seconds to start lap three, while Vietti remounted at the back of the pack and Arenas came into pitlane to try and have his KTM repaired.

His Aspar team was able to do so, but he rejoined several laps down and would be disqualified on lap 13 for getting involved in the podium battle and ignoring blue flags.

Fernandez’s advantage at the front of the pack extended to 2.9s after the first handful of laps and hovered around that margin for a long time.

The second-placed pack of Tony Arbolino (Snipers Honda), Honda Team Asia’s Ai Ogura and Segio Garcia on the EG 0,0 Honda had reduced Fernandez’s lead to under two seconds for the first time on lap 17.

That gap between Fernandez and Arbolino would come down to 1.5s with three laps to go, though Garcia and Ogura would lose touch of Arbolino slightly in the final laps as they engaged over third place.

Garcia and Ogura attacked Arbolino into Turn 1 on the final lap, with the former moving into second, before Ogura scythed up the inside of the Snipers rider to grab the final podium place.

Once clear, Garcia threw caution to the win and got Fernandez’s lead down to under a second by the final sector – but Fernandez held on by seven tenths to claim his maiden grand prix victory.

Ogura held onto third across the final lap to move to within three points of championship leader Arenas with two rounds to go.

Despite his non-score, Vietti is still just 20 points behind Arenas, with Arbolino 23 points adrift in fourth after finishing the race fourth.

Darryn Binder was cast adrift of the podium battle early on, with the CIP rider fifth at the chequered flag ahead of Avintia’s Carlos Tatay, while Stefano Nepa (Aspar) pipped Gresini’s Jeremy Alcoba for seventh.

Snipers’ Filip Salac and the Tech 3 KTM of Ayumu Sasaki rounded out the top 10, while there were costly crashes for title contenders John McPhee – who fell from his Petronas Sprinta Honda on lap five having started from pole – and Aragon winner Jaume Masia (Leopard).