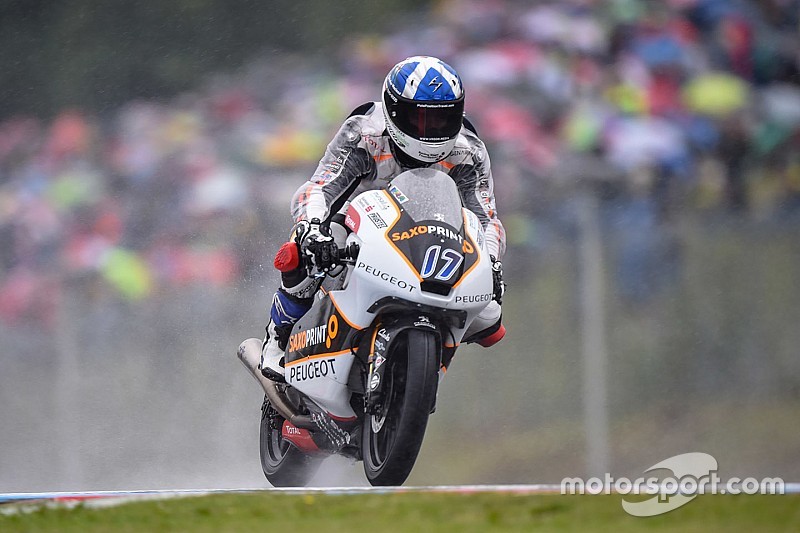 John McPhee took a first ever Grand Prix victory in a wet Moto3 race at Brno, taking advantage of a late crash for points leader Brad Binder to cross the finish line with 10 seconds in hand over his closest rival.

RTG Peugeot rider McPhee was never threatened for the lead once poleman Binder - who was 1.7s in the clear - lost the front end at Turn 1 with five laps remaining.

A crash for wet-weather specialist Khairul Idham Pawi moments later gifted McPhee a 10 second lead over Jorge Martin in second, which he duly converted into his first win on his 76th Grand Prix start.

"I can't even explain it, it's the best feeling in the world," said the Scottish rider, who saved a big moment with three laps to go. "Absolutely delighted, really happy."

Poleman Binder retook the top spot from early leader Martin at the start of the sixth lap, as a lead quartet consisting of the pair, along with McPhee and Aron Canet, emerged at the head of the field.

Canet crashed out on lap 8, as Martin gradually lost touch with the leading duo of Binder and McPhee, falling into the clutches of Pawi - who had climbed from a lowly 28th place on the grid.

Binder started to pull away from McPhee at the halfway stage as Pawi held a comfortable third, unable to repeat the heroics of his Argentina and Germany, before both he and Binder fell.

Behind McPhee, whose winning margin was 8.806s, Aspar Mahindra rider Martin secured his first Grand Prix podium in second, effectively making it a one-two for the Indian marque - which runs identical bikes to Peugeot.

Less than a second behind Martin was Gresini's Fabio di Giannantonio, who secured his third rostrum finish in six races.

Binder still holds a 61-point advantage over Navarro in the standings despite his failure to score, ahead of Bastianini, Romano Fenati - absent following his expulsion from Sky Racing Team VR46 - and Francesco Bagnaia, who failed to score after crashing out.