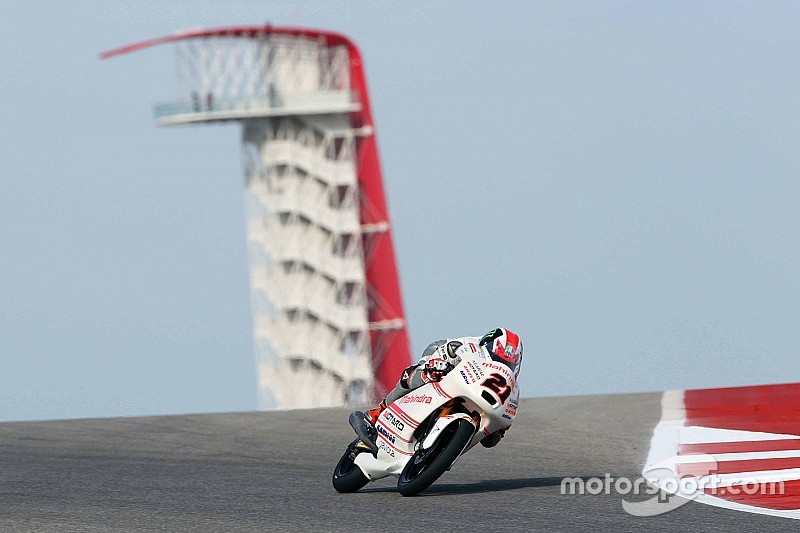 Francesco Bagnaia salvaged points for factory Aspar team as four of the Mahindra riders retired from the Moto3 race at Circuit of Americas.

After a wet/dry qualifying, the race at Austin took place under sunny conditions with 33 riders taking the grid.

Bagnaia, having started from 18th, finished 14th, scoring two points in the championship. The Italian fought in the midfield finishing 2.137s behind a slow moving Fabio Quartararo.

Teammate Jorge Martin's retired from the race, his second this season, after crashing in turn 1. The Spanish rider ran as high as 13th midway in the race before suffering a fall.

Martin was one of the four Mahindra rider to not finish the race, as other non-finishers included Team Italia's Stefano Valtulini and Platinum Bay duo of Karel Hanika & Darryn Binder.

While Hanika crashed in turn 16, Binder came together with Joan Mir in turn 1, the Spanish rider giving no room to the South African, as both collided.

While the riders continued but the damage to the bike meant, they had to come in the pits and retire from the race.

Valtunlini, meanwhile, couldn't see the chequered flag, after he reported of physical pain from the fall he suffered in qualifying.

While after ending as top Mahindra rider in qualifying yesterday, CIP's Tatsuki Suzuki maintained 13th place in the opening few laps, but dropped out to finish 19th.

Bagnaia drops to ninth in the standings with 18th points while Martin and McPhee sits 17th and 19th respectively.

Mahindra is third in the constructors' list with 26 points with sister brand Peugeot fourth with nine points.