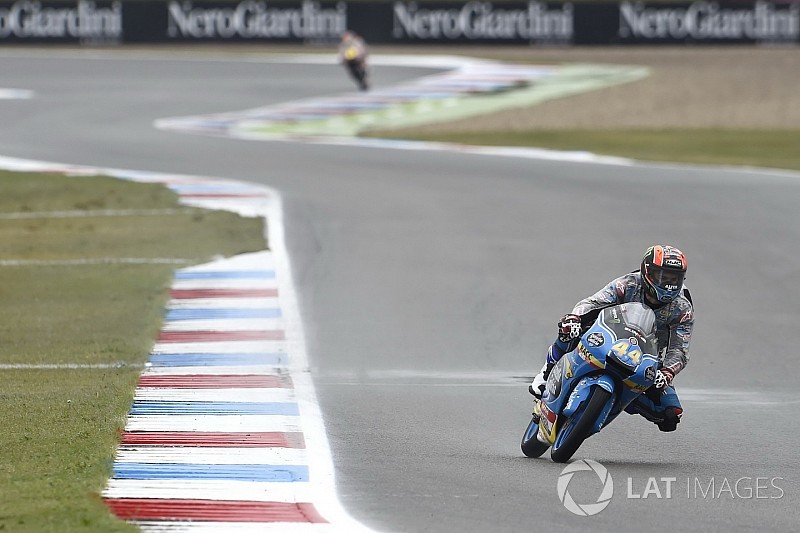 Aron Canet won yet another thrilling Moto3 race at Assen after overtaking Romano Fenati at the final chicane on the last lap to emerge victorious in an 11-bike battle.

While the majority of the race was led by a six-bike group, with pole-sitter Jorge Martin and Romano Fenati trading the lead for much of the distance, a second group led by Canet caught up for the final few laps.

Championship leader Joan Mir started the last lap of the race in the lead, but ran wide at Turn 12, and was passed by several bikes and dropped down to ninth.

Fenati took over following Mir's mistake, but Canet was all over the Italian through the fast sequence of corners before edging past at the final chicane.

British Talent Team's John McPhee, who also slightly lost out behind Mir, fought back and overtook Martin to secure the final podium position from 19th on the grid.

Gresini rider Martin failed to convert his fifth straight pole into his maiden victory in Moto3, but the Spaniard recovered from two incidents to secure fourth.

He ran wide at Turn 1 early in the race from the lead but was back in first just three laps later.

Martin made contact with Marcos Ramirez, who led at the time, later on, and had to run off track again, this time falling outside of the top 10, only to rapidly recover again.

That sent the Dutchman into a crash, his bike theoretically finishing 10th behind Tatsuki Suzuki and Mir, but he was not classified for failing to be in contact with his bike as it crossed the line.

Bendsneyder wasn't the only rider to fall at the very end as Adam Norrodin, who spent the entire race in the top 10, fell at the fast left-hander before the final chicane.

Norrodin was one of eight riders not to finish the race, with Enea Bastianini and Fabio di Giannantonio, notably simultaneously falling at the final chicane on Lap 3.

Canet stays in Moto3 in 2018 with Estrella Galicia