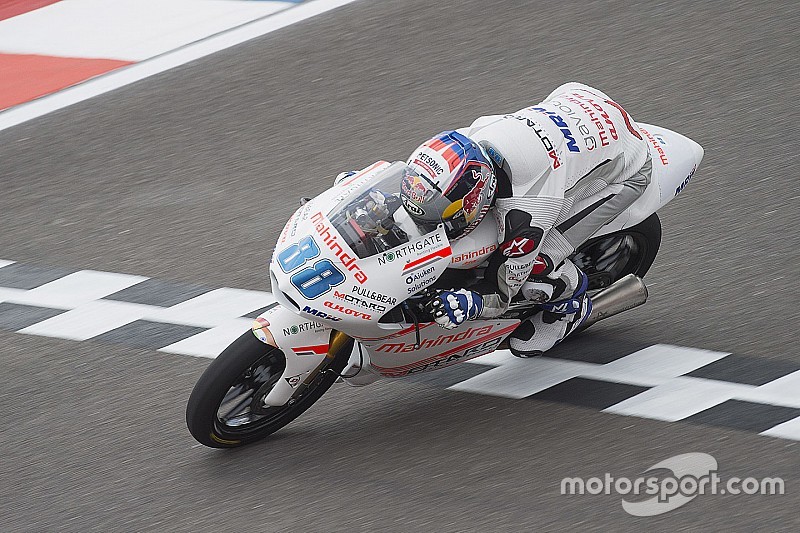 Peugeot’s John McPhee finished the highest classified rider in a Mahindra bike at Sunday’s Argentine Grand Prix after making a late pass on the sister team Aspar of Jorge Martin for seventh place.

On a wet, but drying Termas de Rio Hondo track, most riders opted for slicks, hoping the conditions to improve.

McPhee, who qualified well down the order in 28th place, rapidly gained positions, making a last gasp pass on Martin to finish in seventh place.

The Spanish held on to his eighth position despite losing as many seconds at the death end of the race, ensuring a double top-10 result for Mahindra.

The Aspar rider was as high as fifth in the opening stages after having started 19th in the race battling with the top half for podium before falling back.

Martin rued the continuing gearbox issue which hampered him during the race. "We have had problems all weekend with the gearbox and the race was no different, we were struggling from the fifth lap and it has prevented us from finishing even higher up," he said.

At the front, Malaysia’s Khairul Idham Pawi took a dominant victory in only his third Moto3 race, with Estrella Galicia’s Jorge Navarro and the KTM Ajo of pole-sitter Brad Binder accompanying him on the podium.

Meanwhile, McPhee's teammate Alexis Masbou finished in 21st place, while Francesco Bagnaia was 23rd in the other factory Aspar Mahindra.

The last three riders to complete the race, albeit a lap down on the leaders were Darryn Binder 30th in the Platinum Bay, Lorenzo Petrarca 31st in the Team Italia and CIP’s Fabio Spiranelli was 32nd.

After the second round of the championship, Binder leads the standings with 36 points, with Qatar winner Niccolo Antonelli five points adrift in second place.

Mahindra is third in the constructors' list with 24 points while Peugeot fourth with nine points.