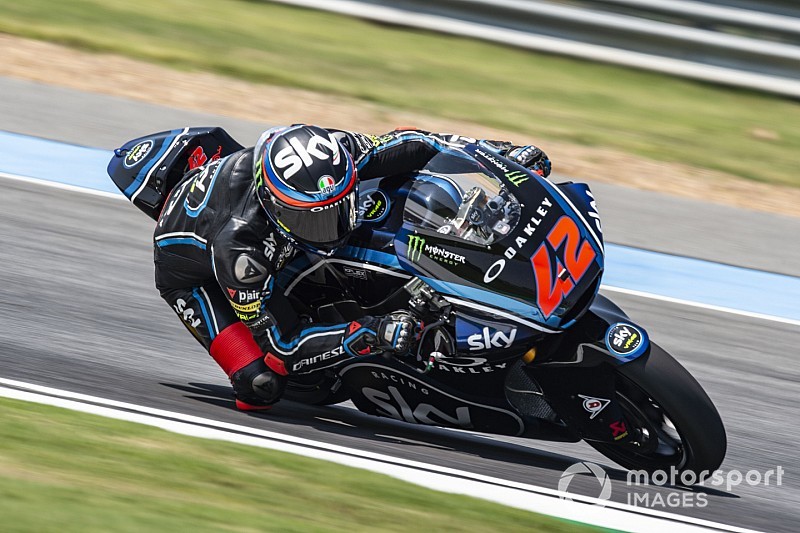 Francesco Bagnaia won the Moto2 race in Thailand and extended his points lead after his teammate Luca Marini passed Miguel Oliveira on the last lap to complete a Sky VR46 1-2.

Bagnaia was up into the lead already on the opening lap from sixth on the grid with a move on Lorenzo Baldassarri at Turn 8.

Ajo KTM duo Oliveira and Brad Binder both passed Baldassarri a lap later, and the duo put Bagnaia under pressure.

The future Pramac Ducati MotoGP rider made a couple of mistakes early on - he ran wide twice at Turn 12, giving up the lead to Oliveira both times.

However, Bagnaia was able to fight back every time, the last of his moves on Oliveira a brave overtake at the first Turn 4 left-hander.

After he made that move on lap 12, he started to show pace Oliveira could not match, and gradually extended his lead to over a second.

Bagnaia cruised to the finish to win by 1.5s as Oliveira and Binder switched their attention to the championship leader's teammate Marini.

Marini looked set to join the leading trio at one point earlier but, just as he got close enough, he made a mistake.

He was still able to catch up for the final few laps and first passed Binder before taking advantage of a mistake from Oliveira at Turn 3 on the final lap.

Oliveira had to settle for third, losing a further nine points in the championship as his teammate Binder did not trouble him and finished a close fourth.

Fabio Quartararo (Speed Up) battled with Marini during the race but didn't have the pace to keep up late on as he took fifth, 6.2s adrift.

The top 10 was completed by Andrea Locatelli (Italtrans) and Simone Corsi (Tasca).

Joan Mir, Marcel Schrotter and Augusto Fernandez had a crash on the opening lap, with Stefano Manzi falling a lap later.

Alex Marquez and Baldassarri both crashed from the top five, while Sam Lowes fell on the last lap.