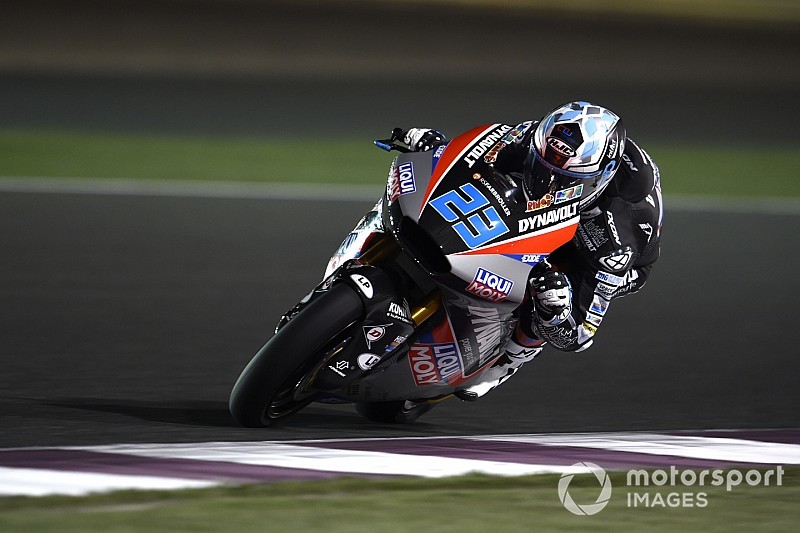 Marcel Schrotter opened Moto2's new Triumph era by scoring pole position for the first round of the new season in Qatar.

Baldassarri's Friday benchmark of 1m58.635s was not threatened until the latter stages of Q2, with the intermediate class adopting the MotoGP-style qualifying format for 2019.

It was Vierge who held the advantage halfway through the 15-minute pole shootout with a 1m58.731s lap, but Schrotter produced a time 0.028s faster some minutes later to take provisional pole before improving to a 1m58.585s in the dying stages.

Baldassarri moved up to third at the end of the session but could not better his Friday time.

Valentino Rossi's half-brother Luca Marini (Sky VR46) set the pace in Q1 and set the fourth-fastest time in Q2, but only after crashing at Turn 2.

Also crashing at Turn 2 in Q2 was Binder's teammate Jorge Martin, who ended up 11th-fastest and best of the rookies.

Of the other riders to make it out of Q1, Tetsuta Nagashima (SAG) ended up 14th, class debutant Nicolo Bulega (Sky VR46) was 15th and Iker Lecuona (American Racing) was 16th.

Fabio Di Giannantonio (Speed Up) had a time good enough to progress to Q2 scrubbed, and will start his first Moto2 race from 19th.