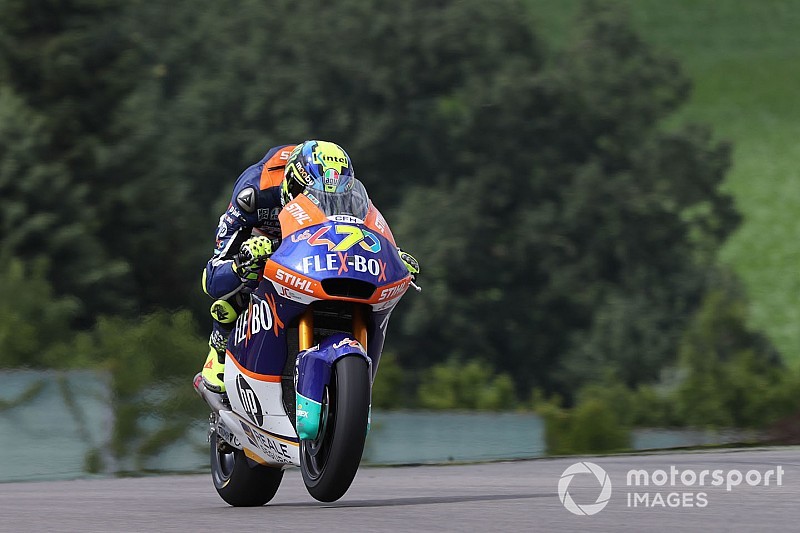 Pons Racing has announced it will retain both Lorenzo Baldassarri and Augusto Fernandez for the 2020 Moto2 season, ending rumours of a potential step up to MotoGP for Baldassarri.

Baldassarri established himself as the early Moto2 favourite by winning three of the first four races, but the Italian has also suffered four retirements and has scored no further podiums since.

He is now only fourth in the standings, even behind teammate Fernandez, who is third despite missing two races early in the season due to injury.

Baldassarri was one of several Moto2 riders linked to a MotoGP move with Avintia Ducati, with the team's sporting Director Ruben Xaus declaring that the team wanted a youngster for next year to potentially replace the out-of-contract Tito Rabat.

But the 22-year-old will continue in Moto2 for a seventh season instead alongside Fernandez.

Moto2 championship leader Alex Marquez was also linked with a MotoGP ride, notably with the Pramac Ducati team that is now set to keep its existing line-up of Jack Miller and Francesco Bagnaia.

Marquez however has expressed willingness to stay in the intermediate class for another season, with his current team boss Joan Olive also hoping he will stay.

"As Team Manager, I can't wish anything more than for Alex to continue next year with us," said Olive.