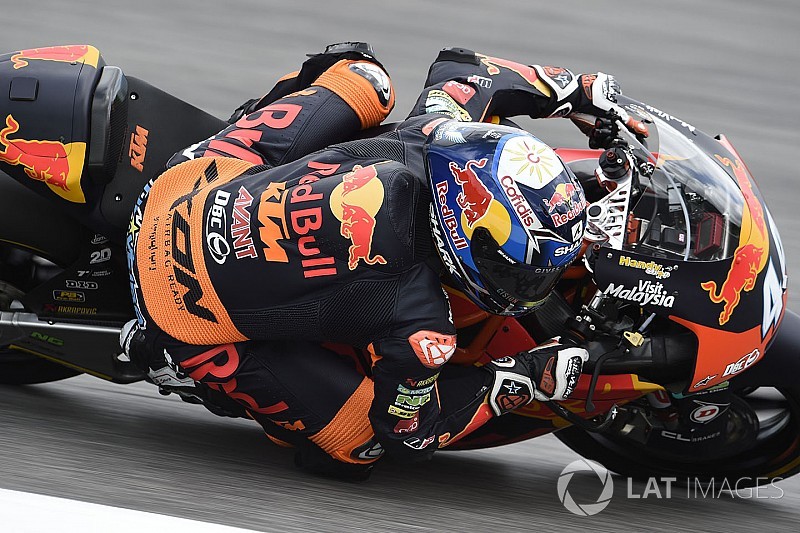 KTM's Miguel Oliveira scored a spectacular win from 11th on the grid in Moto2's Mugello race, emerging victorious in a lengthy duel with Lorenzo Baldassarri.

Oliveira, who will ride for Tech 3 in MotoGP next year, inherited the lead when pole-sitter Mattia Pasini crashed out with what seemed a comfortable advantage - but was still made to work for KTM's first win of the year by a feisty Baldassarri, the pair swapping position many times.

A sluggish getaway from Pasini had allowed Marcel Schrotter to take the early lead, but the German crashed out immediately at Turn 2 as he tried to break away.

This left Alex Marquez in first place, the Spaniard fending off championship Francesco Bagnaia throughout the opening lap but surrendering the lead into Turn 1 as he ran wide under pressure from Bagnaia and Oliveira.

The Portuguese, who had been fifth by Turn 1, slipstreamed past Bagnaia the second time by on the main straight to head an emerging seven-bike lead group.

A recovering Pasini soon dispatched Bagnaia for second and slid up on Oliveira down the inside of the Poggio Secco right-hander, before overtaking the Portuguese twice more in the following laps after losing out to the KTM on the main straight.

As the race approached and passed its halfway point, Pasini began to break away, aided by Bagnaia challenging Oliveira for runner-up.

But just as Pasini looked settled in out front, he dropped on his right side into San Donato with eight laps to run and slid into the gravel, remounting the bike to ride it into the pitlane and retire.

This left Oliveira in the lead, now under pressure from Baldassarri as Bagnaia's pace had dropped off markedly.

Soon enough, Baldassarri briefly edged past Oliveira through the Turn 6-7 complex, yielding to the Portuguese at the right-hander Arrabbiata 1 corner but then completing the move for good at San Donato.

But Oliveira kept up and the pair continued to scrap, swapping position three times in three successive corners – and, when Baldassarri edged ahead once more with three laps to go, Bagnaia and Joan Mir closed right up to them.

Oliveira lunged down the inside of Baldassarri at Turn 6 on the penultimate lap, but the Italian rider struck back at Turn 7.

He seemed clear on the final lap but had a huge wobble on the throttle, allowing Oliveira to close back in and force a pass at Arrabbiata 2 that finally decided the race.

Behind Baldassarri, Suzuki MotoGP target Mir beat Bagnaia for his second Moto2 podium, while the Italian – who will ride the Pramac in the premier class next year – finished just four tenths behind the winner in fourth.

Bagnaia retains a 13-point lead over Oliveira, with Baldassarri now third, 27 points off.

Having run up front early on, Marquez was forced wide by Baldassarri and never recovered, finishing fifth.

Brad Binder was a lonely sixth for KTM, ahead of locals Luca Marini and Andrea Locatelli, with Xavi Vierge and Simone Corsi making up the top 10.

Rookie Romano Fenati had been part of the lead group early on but retired with mechanical issues.

Former MotoGP riders Hector Barbera and Sam Lowes were among the riders to crash, Barbera having collided with Tetsuta Nagashima after an ill-judged overtaking attempt.