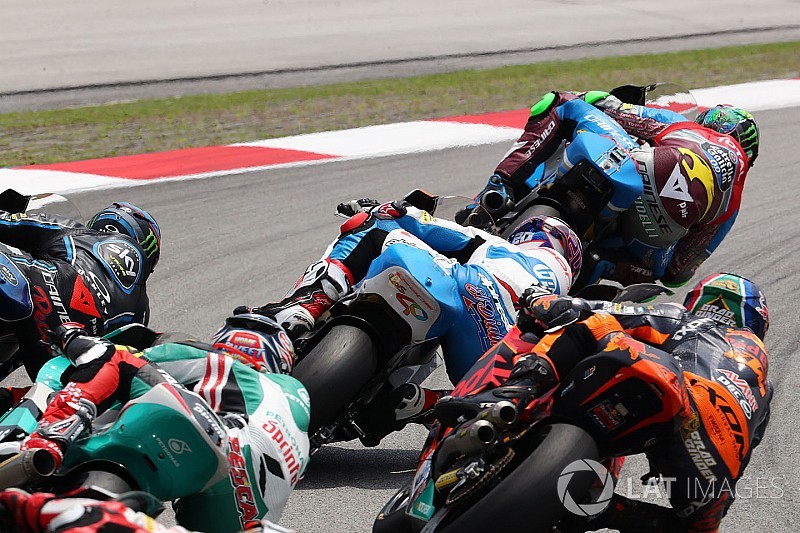 The entry lists for the 2018 Moto2 and Moto3 seasons have been revealed, consisting of 33 and 28 riders respectively.

A 33-strong Moto2 entry list confirms reports of Kiefer Racing switching to KTM bikes, and that it will field Sandro Cortese along with Dominique Aegerter - leaving Tarran Mackenzie without a ride.

Also officially confirming their line-ups are Italtrans, which is sticking with Mattia Pasini and Andrea Locatelli, and Honda Team Asia, which has recruited Tetsuta Nagashima to replace MotoGP-bound Takaaki Nakagami.

Headlining the Moto2 field are Hector Barbera and Sam Lowes, who lost their MotoGP rides at Avintia Ducati and Aprilia respectively.

Six different chassis manufacturers will be represented next year, with dominant brand Kalex continuing to supply the majority of teams.

In Moto3, with Mir and Fenati gone, Estrella Galicia's Aron Canet and Gresini duo of Jorge Martin and Fabio Di Giannantonio are the highest-placed returnees in the 28-strong field.

With Mahindra leaving the series at the end of 2017, Aspar, CIP and Prustel GP (which runs rebranded Mahindras as 'Peugeots') will all switch to KTM machinery, creating a near-even split between Honda and KTM on the 2018 grid.