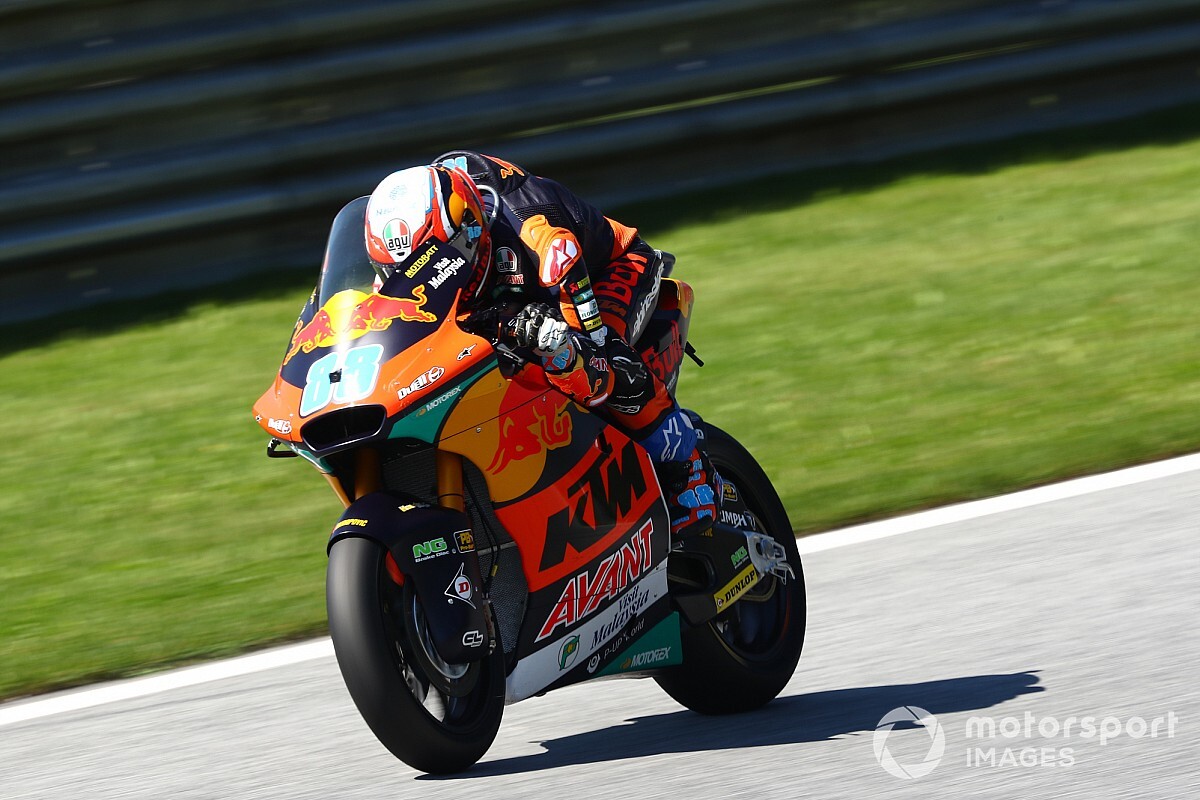 Leading riders from MotoGP and Moto2 have reacted to the news that Jorge Martin will miss this weekend’s San Marino Grand Prix after testing positive for COVID-19.

Ajo KTM Moto2 rider Martin did not travel to Misano after testing positive for the coronavirus, becoming the first grand prix rider this year to catch the illness.

Martin is asymptomatic and is isolating at home, as is a member of a different team, while it is understood a leading Moto3 rider may also have caught the virus – though this won’t be known until the results of a third test come in on Friday.

This news has dealt a big blow to Martin’s title hopes, with current Moto2 points leader Luca Marini – who heads Martin by eight points – commenting: “Yeah, in Moto2 every year it’s the same.

“A lot of riders are fast, the level is very high and the gap between one and another is tight.

“And I’m sorry for him, it’s a pity because he was really fast in Spielberg. He’s one of the fastest in Moto2 and it’s great to have battles with him.

“And I hope that he can be back soon and trying to fight with him at the next race in Misano or Barcelona, or whenever it will be.”

Yamaha MotoGP rider Valentino Rossi says Martin’s diagnosis is another reminder for the paddock to “pay attention” when away from the track, but concedes that luck plays a factor.

“I know today the news and it’s a big problem because it’s very dangerous… so, we need to pay a big attention and we need to live in our houses, don’t see a lot of people, and pay attention for the virus because for Martin it’s a very bad news because he has to stop for one, two races,” Rossi said.

“This is bad for his championship, but it depends also if you are lucky or unlucky, I think because maybe you pay attention, you stay at home, but maybe you met one person [who was sick].

“So, I think Martin is also unlucky.”

Suzuki’s Joan Mir admits he – like all the riders – are nervous every time he goes for a COVID-19 test in case he has caught the virus, which could end up derailing his title hopes.

“All the riders are a little nervous when we do the tests before the result; a positive can be saying goodbye to all the options to fight for the championship,” Mir noted.

“No rider can afford to lose points and it is something that gives us quite a [bit of] fear.”

LCR’s Cal Crutchlow admitted MotoGP was “very lucky” that it had taken until the sixth round of the season for a rider to have caught the virus, but praised the efforts the series has taken to keep the paddock as safe as possible.

“I think that as a sport, we've done well with it because there's been one case, I think, or two  or whatever it may be,” Crutchlow said.

“But, I mean, in general, if you look at the other sports, there seems to have been a lot more.”