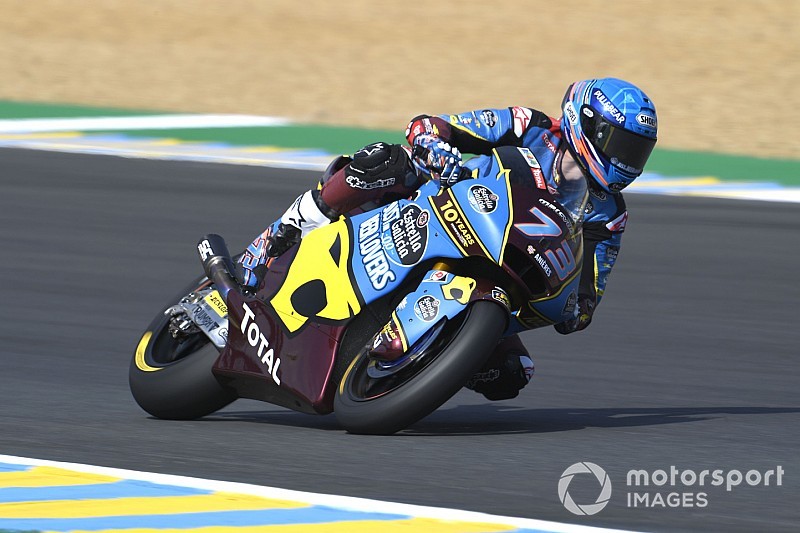 Alex Marquez took his first Moto2 victory in over a year at Le Mans as championship leader Lorenzo Baldassarri crashed out of the race.

Baldassarri had a big crash just one lap into the race and even collected Mattia Pasini in the process, before being taken away on a stretcher.

He was subsequently diagnosed with a dislocated right collarbone and a concussion, and headed the local hospital.

It was the second major incident in two laps, with Andrea Locatelli having had a massive highside at Turn 3 after the start, the Italian fortunate to avoid being hit by another bike.

Tom Luthi and Marquez took first and second from pole-sitter Jorge Navarro at the start, with the Swiss rider leading the first few laps.

But Marquez passed Luthi at the Dunlop Curve on lap 4 and the latter lost more positions in quick succession.

For a while it was a Marc VDS 1-2 with Xavi Vierge following Marquez, but the charging Simone Corsi soon passed the latter.

The Tasca Racing rider carved his way through the field from 18th on the grid, running second after just nine laps.

But as he set out after Marquez, Corsi ended up crashing out just three laps later at Turn 13.

Marquez's lead then grew to over a second, with Navarro inheriting second. The Speed Up rider's efforts to close in on Marquez ended when Augusto Fernandez started to attack him, the duo switching positions a couple of times, allowing Marquez to increase his gap to two seconds.

Navarro looked to have started a late-race charge, but that stopped when he ran wide at Garage Vert, allowing Fernandez through.

Marquez then managed his gap to cross the line first by 1.1s, his first win since Motegi in 2017.

Navarro did not let Fernandez pull away and even reclaimed second, only to make another mistake, before eventually securing the position with a last-lap move.

Both Navarro and Fernandez repeated their results from the previous race at Jerez, with Brad Binder taking his best result of the season with the struggling Ajo KTM team.

He stole fourth from Vierge in the dying stages, the latter followed by Luthi, who had to settle for sixth.