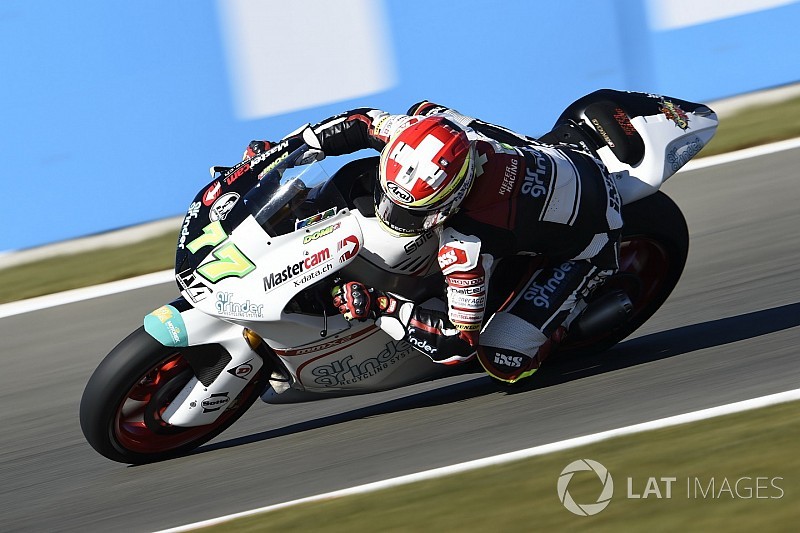 The Kiefer Racing squad has confirmed it will contest this year's Moto2 season with a single KTM bike for Dominique Aegerter.

The team was set to be bought by former racer David Pickworth over the winter following the tragic death of team owner Stefan Kiefer during the Malaysian Grand Prix weekend.

However, the deal – which would have seen the team field two KTMs for Aegerter and 2012 Moto3 champion Sandro Cortese – fell through at the eleventh hour when an investor pulled out.

But, after a “great response” from fans and sponsors, the team has been able to secure its place on the Moto2 grid for 2018 with Aegerter.

The running of the team has been taken over by Jochen Kiefer, brother of the late Stefan.

He stated: “First of all we would like to express our gratitude for the great sympathy for Stefan's death. It was truly overwhelming how many people remained close to us during that difficult time and many thanks to all of them.

“2018 unfortunately started with another setback. The deal with David Pickworth, who was wanting to buy the team, has unfortunately fallen through. The negotiations and talks were delayed for a long time, but in the end Mr Pickworth had to call off the deal.

“It's a pity; it would have been nice if we could have continued with two riders. We are very, very sorry for Sandro Cortese.

“We've already worked with Sandro, in 2015, and had a good time with him. The signs for a further successful collaboration with him were very positive, and we nevertheless wish him much success in his future career.”

Kiefer is confident running a KTM chassis - which won the final three races of the 2017 season courtesy of Ajo Racing's Miguel Oliveira - with Aegerter at the helm will prove to be a successful combination.

“With Dominique Aegerter and KTM machinery, we will certainly be capable of getting good results,” he added.

“The funding for this project has been secured through our longstanding partners as well as many new sponsors that Dominique has been able to bring on board.”

It has been reported in German media that Cortese, who was due to switch from the Intact team to Kiefer for 2018, is set to switch to World Supersport this season.