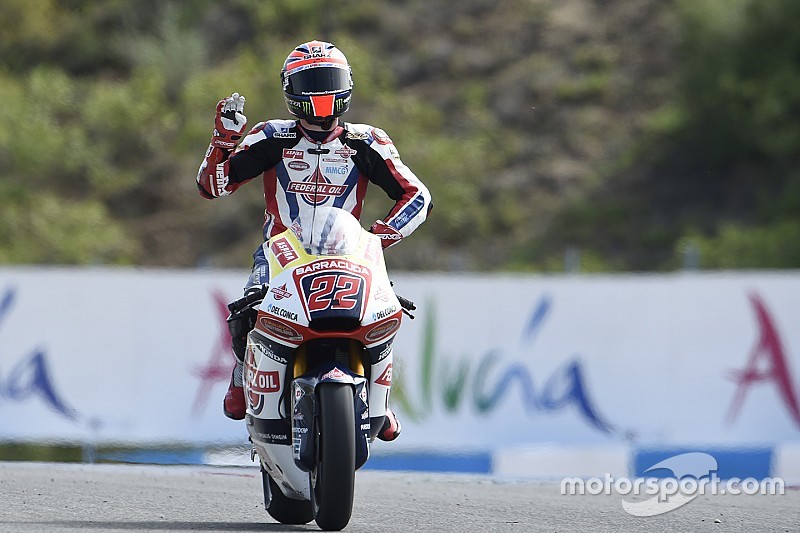 Sam Lowes stretched his advantage at the head of the Moto2 points standings with a comfortable first win of the season at Jerez, ahead of Jonas Folger.

Gresini rider Lowes, who had taken pole position on Saturday, lost out to Folger at the start, but didn't take long to wrest back the top spot, doing so as his German rival ran wide at Dry Sack on the second lap.

Folger was able to keep Lowes honest for a good portion of the race, with less than half a second between the pair at mid-distance, but Folger was never able to draw close enough to attempt a pass.

It was in the final third of the race that Lowes began to press home his advantage over Folger, who had a fallen a second behind the leader with eight laps to go.

The gap between the pair grew by a second in the following three laps, Lowes growing his cushion to over three seconds before finally taking the chequered flag with 2.480s in hand after a leisurely final lap.

It was only the second Moto2 victory of Lowes' career, and his first on a Kalex chassis.

"In the final part of the race I just tried to keep a good rhythm and save the tyres," said Lowes. "The first win [of the season] has been coming and it's good to finally get that off my back."

Behind the leading pair, Alex Rins had a straightforward race to third, the Pons rider sticking with Lowes and Folger in the opening laps before falling back in the latter stages.

Franco Morbidelli had a lonely race to fourth, taking advantage of numerous crashes and retirements among the frontrunners.

Simone Corsi was among the first to hit the deck, doing so on the second lap, and was swiftly followed by Cortese's Intact GP teammate Sandro Cortese and Alex Marquez.

That promoted Marcel Schrotter into fifth, only for the German to crash out some laps later at Turn 13. Lorenzo Baldassarri and Miguel Oliveira soon followed suit, the duo having raun fifth and sixth until their respective demises in the closing stages.

All that handed fifth to reigning champion Johann Zarco, who recovered from a lowly grid slot of 15th to salvage important championship points, ahead of Thomas Luthi, who was as low down the order as 11th after a poor first lap.

Takaaki Nakagami finished just behind Luthi in seventh, ahead of Dominique Aegerter, Luis Salom and Xavier Simeon, who rounded off the top 10 after his monster qualifying crash.