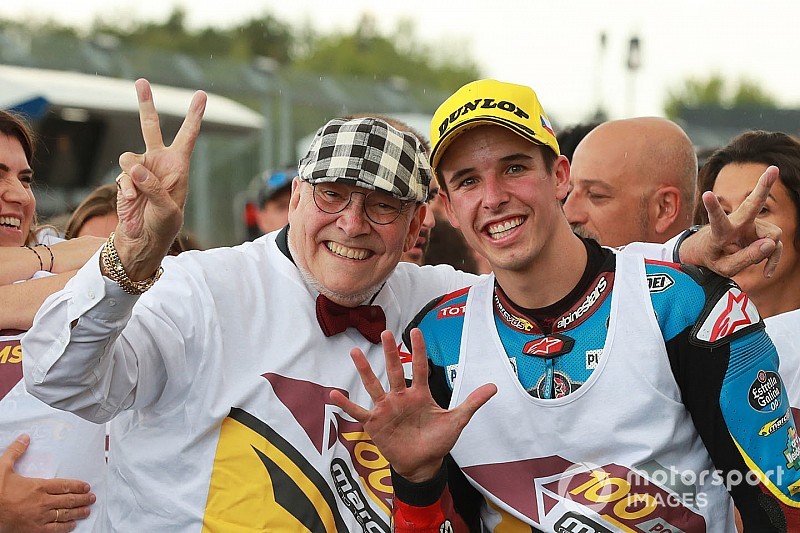 Alex Marquez dominated the Brno Moto2 round to claim his fifth win of the 2019 season and extend his championship lead to 33 points following a crash for Tom Luthi.

Poleman Marquez recovered first from Gresini's Sam Lowes on the opening lap, and eased into an insurmountable lead to secure victory ahead of Moto2 podium debutant Fabio Di Giannantonio.

Lowes got the holeshot into Turn 1, but couldn't hold the lead and soon found himself staring at the rear of the Marc VDS Kalex when Marquez came back through at Turn 3.

The Gresini rider – who will not remain with the team in 2020 – couldn't match Marquez's pace, and was quickly shuffled all the way back to 10th by the time he crashed out at Turn 7 on lap nine.

Di Giannantonio quickly disposed of Lowes for second at the start of the second tour, and put some pressure on Marquez over the next handful of laps.

But by lap eight, Marquez was 1.4s clear and soon had that advantage up to over two seconds as the race entered its second half.

Speed Up rider Di Giannantonio did reel Marquez in somewhat in the latter stages, the gap coming down to 1.5s, but Marquez was once again two seconds clear with four laps to go.

That proved the last straw in Di Giannantonio's hopes, with Marquez cruising across the line to begin the second half of the year with another victory, his fifth in six races.

Intact GP rider Luthi trailed Marquez by just eight points coming to Brno, but a crash while running inside the top six on the fourth lap allowed the Spaniard to open up his lead in the standings to 33.

Enea Bastianini ensured two rookies would make it to the podium for the first time, after the Italtrans rider came from 18th on the grid to pass Speed Up's Jorge Navarro at the Schwantz corner on the last lap.

Navarro could do nothing to reclaim the spot and had to settle for fourth, with VR46 rider Luca Marini completing the top five ahead of Marcel Schrotter (Intact GP), Nicolo Bulega (VR46), Augusto Fernandez (Pons), SAG's Tetsuta Nagashima and Iker Lecuona (American KTM).

Former Tech3 MotoGP rider Jonas Folger returned to action mid-weekend to replace the injured Khairul Idham Pawi at the Sepang team, and was 19th at the flag.

Brad Binder, mounted on the new KTM chassis, was a late crasher, while Mattia Pasini – replacing Simone Corsi at Tasca Racing – and Lukas Tulovic (Kiefer Racing) also fell out of the race.